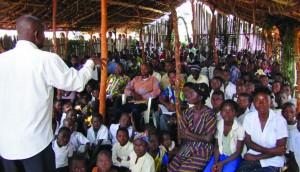 Brother Kasongo preaching in one of the new church plants

I am so thankful for the blessing of faith and can hardly imagine what it would be like to endure life’s trials without the assurance of faith. How could we walk the Christian walk without this bedrock principle of Christianity? “Faith lightens our burdens and relieves our weariness by the anticipation of Heaven at our journey’s end. Faith rejoices in hope, and is patient in affliction. Faith waxes strong and valiant in conflict, and conquers in the great fight of temptation. We must have a living faith,—a faith that will hold the soul in the hour of trial; for everything that can be shaken will be.” Signs of the Times, May 22, 1884. We need that living faith today, but not only do we need living faith, we need saving faith. “Faith, saving faith . . . is the act of the soul by which the whole man is given over to the guardianship and control of Jesus Christ. He abides in Christ and Christ abides in the soul by faith as supreme. The believer commits his soul and body to God, and with assurance may say, Christ is able to keep that which I have committed unto Him against that day. All who will do this will be saved unto life eternal. There will be an assurance that the soul is washed in the blood of Christ and clothed with His righteousness and precious in the sight of Jesus.” In Heavenly Places, 104. May we have that assurance of living, saving, abiding faith in our lives today and each and every day. 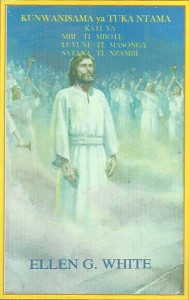 I am so thankful for the many workers around the world moving forward with unflinching faith to share the message of saving faith with the multitudes in the darkness of doubt and fear. One worker that has manifested incredible faith is Brother Celestin Kasongo, working in the unentered regions of the Democratic Republic of Congo. He began with just his family; then the doors opened to study the Bible with some interested villagers, and now calls have been coming from villages in all directions. The work has grown more than anyone could have imagined through the diligent work and unwavering faith of our brother and his coworkers. Now there are thousands of new believers worshipping our Creator in sixty-five new churches in this once dark area! These next few months, Brother Kasongo is dedicating himself to traveling to these various areas and baptizing those that have been studying and accepting the message of mercy for this time. Hundreds are looking forward to making this commitment to their Lord through baptism and being used by their Lord for the spreading of this message even further. Just recently, Brother Kasongo has translated and printed portions of The Great Controversy into Kikongo, and now these truth-filled books in the local language are beginning to spread far and wide. One of the biggest factors that contributed to the rapid spread of the work in this area was the printing of full-message Bible studies in their own language, but Brother Kasongo believes that The Great Controversy is already having an even bigger impact. Even though twenty-five hundred books were printed, the call is already so great that more need to be printed. Not only do the believers desire the books for their own edification and growth, but other Protestant churches want to buy them to distribute to their members, also. One Catholic man who received one of these books has been baptized just a couple of weeks ago. At first, he fought against the Seventh-day Adventist message, but after reading The Great Controversy, he recognized that exactly what it has predicted is taking place today. Now instead of fighting against the message, he is devoting himself to sharing with others this message he once despised! Praise the Lord for the power of His message! Please pray for the work of Kasongo and the others as they continue to let the light of truth shine brightly in this previously dark area. If you would like to help them with reprinting The Great Controversy in Kikongo, you can mark your donation Congo Literature. Thank you for your help!

Yours in the faith of a finished work,