Motorcycles in the Monsoon

and Other Stories from the Philippines

The Tipolohon church is often visited by storms of life and trials of faith, but God watches over its members, as you will see in these stories from this church in Claveria, a region in the northern part of the Philippine island of Mindanao. 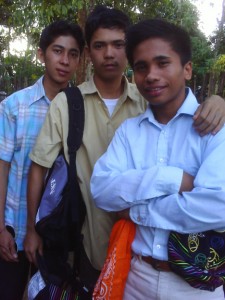 In a previous edition of Mission Projects International magazine, we learned about Junrald Agan, a young man who was in love with the world, but began listening to the Word of God. He became a regular Bible student of the energetic evangelist

Dexter Cadurna, and by God’s grace accepted Jesus Christ as his personal Savior. Afterward, he attended Mountain Heights Missionary Training School for two years. His parents and brothers were his first crowns in soul-winning. After graduation, he was assigned to the Davao Oriental church in Nangan, along with a classmate. Despite their youth, but because they walked humbly with God and obtained power from Him, they were able to preach the gospel of the Word of God and do medical missionary work. By God’s grace, two backsliding families were revived as a result of their work, and one 19 year old boy was baptized. Now he too, is attending the missionary school. Today, Junrald is working as a volunteer for the Tipolohon church, along with other young people. To provide a little money for their personal needs, they sell stain remover. Please remember them in your prayers, that our God will give them more courage as they work in His service.

Helen, a Tipolohon church member, was inspired by the Holy Spirit to give Bible studies to 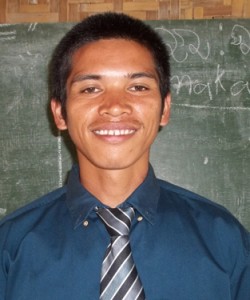 her neighbors. One of the them was a 30-year-old man named Vergel Ances, a God-fearing man who had attended the Catholic church with his parents every Sunday since his childhood. While at college, he met a Seventh-day Adventist classmate, and they discussed their beliefs with one another, until one day he was convinced that swine was unclean. He also discovered that most of his beliefs could not be found in the Bible.

After graduation and a few years of work, Vergel went back to his home in Tipolohon, which was near the Seventh-day Adventist church. He continued to attend the Catholic church and became a layman for the priest. Whenever the priest could not be there, Vergel would preach, but his sermons were different, because he included passages from the Bible and warned the congregation about idol worship!

One day, a member of the Tipolohon SDA church invited him to worship God every Sabbath day, and

he accepted. A few days later, he decided to attend the Mountain Heights Missionary Training School because he wanted to follow and serve God the right way. He hopes to return home and become a great asset for the Lord. He is mature and responsible and has become the right-hand man of Ting Palange, the Bible worker. Please do not forget Vergel in your prayers, so that he will become a successful disciple of Jesus Christ.

“You are wearied in the length of your way; yet you did not say, ‘There is no hope.’ You have found the life of your hand; therefore you were not grieved.” Isaiah 57:10.

“Do not fear any of those things which you are about to suffer. . . . Be faithful until death, and I will give you the crown of life.” Revelation 2:10.

Remember how Helen was giving Bible studies to her neighbors in Tipolohon? She needed help, so she called for Bible workers Dexter Cadurna and Titing Palange. They decided to move there, along with all of Dexter’s family, to work alongside student workers Junrald Agan and Winlove Sumalong. They would work for God by faith alone, and did not know where they would find the money for their daily needs. 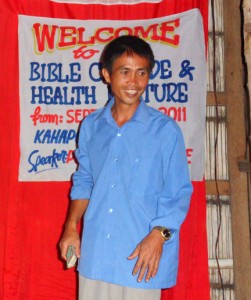 One night before the move, Dexter and Titing prayed together to the Most High God, asking where they would get support for their food and fare. God is merciful, and the hour of our greatest need is His opportunity. After this prayer, Brother Dadi from the Lopes church gave one sack of flour and Bruce Palange gave 2700 pesos (about $64 US dollars). This allowed them to pursue their plans to move to Tipolohon and do the Lord’s work there.

The students at Mountain Heights looked for ways to support the ministry in Tipolohon. So every Sunday they work at Brother Dadi’s rice mill, sacking the rice in order to give a little money to the ministry. Dexter had hoped to be the one to give money to help the students; so this reversal made him feel like crying.

On another occasion, Pastor Uning Vertudez asked Dexter and Titing to help him with funeral services in Zamboanga because his father had passed away, and they were given bus fare. It was the rainy season, and it would be a long and dangerous trip by motorcycle, but Dexter and Titing decided to ride them anyway, in order to save the money for the Tipolohon ministry. During the trip,

the rain soaked them completely, and at midnight they rested by lying at the side of the road near the gas station, while the winds blew. Working in love for God, without murmuring, is so sweet! Who can separate us from the love of God?

Dexter has put on many public crusades without ever knowing from where the funds would come. But he has learned to trust wholly in God, and as a result of his faithful labor, and the assistance of his family and the youth volunteers, many souls are now receiving Bible studies in that area.

Today, Dexter and Titing are planning to conduct another crusade in the neighboring area of Tipolohon during the first week of August, 2012. Please remember them in your prayers, that our Lord will grant them 25,000 pesos (about $600 USD) for the crusade budget for next quarter, and most of all please include Dexter in your prayers that he may receive adequate support as a full-time Bible worker.

By Titing Palange. Support for the work in the Philippines can be sent to Mission Projects International, PO Box 59656, Renton, WA 98058.