Noah’s Ark Christian School (NACS) is located in the small town of Rio Preto da Eva in the state of Amazonas, Brazil. The closest city, Manaus, is also the state’s capital and is located one hour away. The school was founded in 2009 by Rio Preto resident Vania Scheffel and American Sandy De Senna. Mrs. Scheffel has many years of experience in the educational field in a Seventh-day Adventist boarding school, and Mrs. De Senna brought into the mix several years of public school teaching and academic coaching in California. The school year runs from February to December, with a one-month break in July. 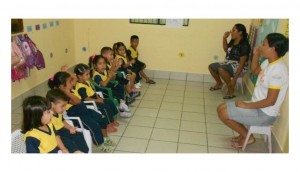 Little school children learn about Jesus in their early years.

Noah’s Ark began in mid-2009 with only three students and has grown to over 60 students at the beginning of the 2012 school year. We offer preschool, pre-kindergarten, kindergarten and first grade. Our staff is Seventh-day Adventist and consists of five teachers, two aides, an English teacher/supervisor, a music teacher/choir director and a principal.

The focus of NACS is to introduce children and their families to Jesus Christ and build a strong pre-literacy background to ensure future academic success. Bible is taught daily and academic subjects are taught using Bible themes. Monthly, there are family outreach activities with the purpose of providing spiritual guidance and helping parents support their children academically.

Evaluations are done on an individual basis twice a year by the supervisor followed by the issue of progress reports distributed at parent-teacher conferences. Every year our kindergarten students have graduated with a very strong foundation for first grade and have memorized many Bible verses and learned numerous Bible stories. Parents have been very satisfied with their children’s educational experience. 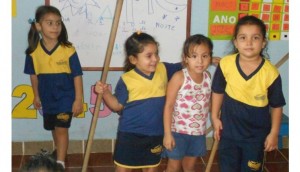 Part of the way some children are able to attend is through student sponsorships. To date, we have sponsors for three children. One of the children, K., was a student at our school last year and is being raised by her grandparents. They could not afford to send her this year and she refused to go to the public school where they had to send her. She would just cry and cry because she missed the Ark. When I spoke with the grandparents about the recently donated scholarship, they were very happy, and the little girl was delighted. She is now able to attend our kindergarten class on a reduced tuition, thanks to her sponsor.

A. is another little girl who attended our pre-kindergarten last year and is also raised by her grandparents. Her grandfather has had serious health problems, and they have been having great financial struggles. They make a lot of sacrifices to send A. to our school. After hearing of their difficulties, I was so glad to be able to offer them a reduced tuition scholarship as well, thanks to another sponsor. The grandmother had tears in her eyes and was so thankful. A. continues to study in the kindergarten class.

G. is a little girl who was in the class for two- to three-year-olds last year. Her mother is a manicurist and struggles to pay the tuition but would not think of sending her elsewhere. The mother’s husband is a drug addict and often disappears for long periods of time, leaving her with all the financial responsibility. She was on the verge of having to withdraw G. from the pre-kindergarten class but was greatly relieved when we were able to offer her a reduced tuition scholarship, thanks to another sponsor. 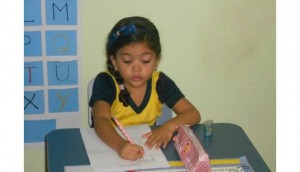 First grade was added this year.

For the first year, we are offering first grade, with authorization from the town’s Department of Education. Our group of 12 students is bright and eager to learn, some of them returning students from last year’s kindergarten class. We are pleased to note that all the returning students from the Ark were very well prepared for first grade and are doing exceptionally. The rest of the students are catching up and proceeding nicely. We expect great things from this special group of kids.

We presently have two main needs. The first is for student sponsorships, and the second is for a school building.

You can introduce a child to Jesus Christ and help provide a strong educational foundation for only $30 per month. Several children are in need of sponsors to be able to attend Noah’s Ark.

About $4,000 has been raised so far for our building project. We have outgrown our facilities, and the landlord also wants the property back by the end of 2012. We are unable to find adequate facilities in town and are in need of purchasing our own land and building our own school. The estimated cost of land of a sufficient size which would allow for growth is about $25,000.

If you would like to help with either of these needs, please send your donations through Mission Projects International at the contact information below.