I am so thankful we are not just a happenstance, but we have been chosen for the greatest mission of all time–not a clandestine operation in which hangs the destiny of nations, but rather participation in a task that will bring eternal security to the universe. We are “a chosen generation, a royal priesthood, an holy nation, a peculiar people.” We have been “chosen in Him before the foundation of the world.” (2 Peter 2:9; Ephesians 1:4) We have been chosen by God. Not that God removes the gift of free choice or predetermines salvation, but as God said of Jeremiah in the womb, He says to each of us, “Before I formed thee in the belly I knew thee… I ordained thee.” (Jeremiah 1:5) The great Creator and Sustainer of all knows, chooses and ordains us each to the special work He has given us to fulfill, but not only does He choose us, He needs us. “We were brought into existence because we were needed.” “Humanity is the instrument through which God works for humanity.” Signs of the Times, April 22, 1903. God has chosen us individually; He has a niche for us to fulfill for Him, and He needs us for the completion of His grand plan for the salvation of man! May we be faithful! 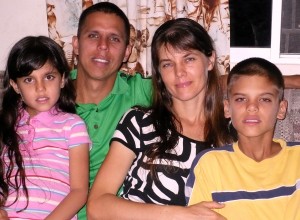 Barac and Laurie with their two children

This month I would like to share a report from a family on the frontlines seeking to fulfill their mission for God. We have been told, “If families would locate in the dark places of the earth, places where the people are enshrouded in spiritual gloom, and let the light of Christ’s life shine out through them, a great work might be accomplished.” Adventist Home, 489. Barac and Laurie Orellana and their family are seeking to let Christ’s light shine out of them from their outpost mission station in Ecuador. The Lord is blessing their outreach as they show an interest in people and seek to minister to them, whatever their needs may be. Sometimes that means taking families under their wings to teach them how to order their family. Other times it may involve helping their neighbors to have sanitary living conditions. It can be bringing the sick into their home to share with them principles of a healthy lifestyle. Recently they developed a plan to cover twenty large cities in Ecuador with truth-filled literature. The task was daunting, but they knew that, with the turbulent times in which we live, there are many seeking for stability that a knowledge of truth from the Bible gives. Three hundred and sixty boxes of literature had been donated; now it was their task to put the truth-filled tabloids in the hands of searching souls. Their plan was to find people who would be willing to distribute these messages of truth in each city. They would supply the literature and coordinate the effort. In one smaller city, Barac searched far and wide for some to help him, but none were found. As he was nearly ready to give up, a young shoeshine boy’s bright smile caught his attention, and he asked him if he would be willing to distribute the literature for a day’s wage. The boy was interested but needed permission from his mother. As Barac explained the job to his mother, the mother told her son that he must promise to complete the job and he could not fail, for it was a job for the Lord. As she looked over the papers she said, “The Lord has sent us these papers because He loves us. They are just the message we need. God bless you!” With that encouragement, Barac left the literature and headed off for another town. Over a quarter of a million pieces of literature have gone into the hands of the people of Ecuador, touching hearts for the kingdom of God! Please pray for the Orellana family as they seek to let the light of Christ’s life shine through them to the needy people of Ecuador. If you would like to help their work you can mark your donation for “Ecuador.” 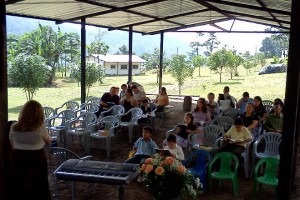 May we be called, chosen and faithful,