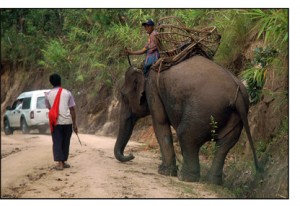 Elephant on the road to Piyotha.

Last May I had an opportunity to go to the mountain village of Piyotha (Beyota). The villagers are very poor and many are addicted to opium. One lone Seventh-day Adventist church stands as a beacon among fifty similar villages. It takes several hours by truck to reach some of these villages, and a few can only be reached by motorcycle or foot.

Our friend Gayle, who was a registered nurse in the United States, has been working with the villagers in and around Piyotha for a couple of years now. She has invited us to help her establish five to ten medical missionary education and treatment centers to bring light to this heavily suppressed area. We are told in Testimonies, vol. 6, 433,

“… the angels of God are waiting to co-operate with all who will devise plans whereby souls for whom Christ died may hear the glad tidings of salvation….”

We began to pray, and in just a few days the doors began to open.

While visiting Chiang Mai Adventist Academy with Gayle the next Sabbath, we met an elderly Adventist Thai lady named Mrs. Summot. After we shared about our work in Thailand and Gayle’s desire to help the hill people, Mrs. Summot became very excited. She said that she could help us make it happen. 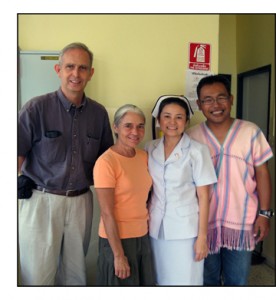 Steve, Gayle and Dr. Prajene and his wife.

On Monday, Mrs. Summot went with Gayle to meet the Chiang Mai Deputy Director of Health for permission to start the health centers. The Director immediately called the head doctor of Gayle’s district and told him we would be coming to see him. Later that week, Gayle and I went to Omkoi district to meet with Dr. Prajene. He offered to bring a team of medical workers to Piyotha and do a health clinic with Gayle for a day.

Two weeks later, I was able to catch a ride up to Piyotha with the medical team. Dr. Prajene, the Chief Physician and Medical Director of Omkoi district was visiting Piyotha with ten members of his staff to run a day clinic with Gayle. She was able to work side by side with them and also provide some medical equipment that was much needed.

At the end of the day, Dr. Prajene visited the small clinic that Gayle has been running from her house and was pleased with all the medicine and supplies she had on hand. “Where did you get all of this medicine?” He asked

“I have purchased it with my own money for the people.” she replied. He was amazed that she would do this for people she did not even know. He was also very impressed with her organization and the patient records she was keeping. Dr. Prajene told us that he was extremely happy that Gayle is actually living with the people and treating them medically. He gave his full support. He told us we can build health education and treatment centers wherever we want and as many as we feel are necessary. He also invited Gayle to come to his hospital in Omkoi and work with him in any area where she feels the need for more local medical training.

God has provided a way through medical missionary health centers to bring the gospel to these remote mountain villages. By meeting the needs of the people, the light of Jesus will shine through and the Adventist message will spread throughout the hills of Piyotha. Churches will grow and these people will be delivered from addiction and gloom.

If you have a team of medical professionals, builders, church or youth groups that would like to come or support our work in Thailand, please email us and share what God is leading you to do.

Will you join us and share the joy of reaching souls for eternity? 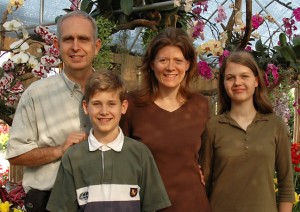