In the Dominican Republic

During all of our evangelistic programs in the Dominican Republic, we use free medical and dental clinics to help to draw people to our meetings. Two years ago, during a morning medical clinic in the city of Higuey, a lady named Marleny approached Pastor Miguel, requesting a ticket to see the dentist and receive medical care for her children. We normally do not give tickets at the clinic site. Those are given only at the evening meetings as an incentive for attendance, but Pastor Miguel felt sorry for her, and gave her a ticket, because he could see a deep sadness in her face. Both she and her children received the care that they needed, and we were happy to see her later that evening at our meeting.

Marleny returned each evening and paid careful attention to the topics on salvation that I presented. We learned that she lived in a barrio called Mamatingo, which is well known as a dangerous and dirty place full of drug traffic and other crime. We were thrilled that we had a good response from the meetings, with a large number of people giving their hearts to God, but Marleny was afraid to make a decision for Christ at that time.

In the weeks following the Mamatingo meetings, Pastor Miguel, along with several Healing Leaves Bible workers, visited the area by goingdoor to door and talking with the people to learn their needs. On one such visit, Pastor Miguel met Marleny again in her home. Her boyfriend Johan was living with her and was almost totally wasted on crack cocaine that afternoon. He became seriously agitated and angry that Marleny was listening to Pastor Miguel share about Christ. He threatened him and chased him out of the house. As he was leaving, Marleny begged him to come again.

Pastor Miguel is full of holy boldness, so he did visit again and studied the Bible with Marleny for four to five hours each day for five days. Johan was angry, but for some reason did not stop the studies. Day after day, they studied and discussed the Bible while Johan appeared to be ignoring them. After the study, on the sixth day, Johan came to Pastor Miguel and asked him if he could join the study. The next day 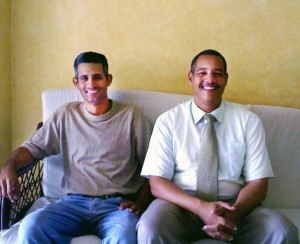 Johan joined the study and shared with Pastor Miguel that he had been involved with drugs and alcohol for over ten years and that his life was a huge mess. His family had all turned away from him, and he was not able to work and now had become a drug dealer. Even though he made a lot of money, Marleny still had to support the family because Johan’s money went to support his drug habits. He pleaded with Pastor Miguel to help him overcome the addictions. He asked, “If God is so powerful, why doesn’t He change me?”

Pastor Miguel told him that he needed to surrender his will to God and ask Him to come into his heart and be in control. Johan did just that. Almost immediately God took the addictions away, and his life began to change profoundly. Day after day, the people of the church helped him with food, clothes and other needs, and he became happier every day. Six weeks later, Marleny and Johan were married in the church at the same time as ninety souls from the meetings and clinics were baptized. The day after their wedding, Johan started working as a motoconcho (motorcycle taxi rider). He began to earn about $15 a day, which is about normal for a motoconcho; but each day he began to be blessed, and soon he was earning twice that amount. Two months later, he was able to start his own business. Several times, Johan has come to see Pastor Miguel with tears pouring out of his eyes. At first, Pastor Miguel thought that something tragic must have happened, but Johan said that they were tears of great joy. He wanted to thank Pastor Miguel for sharing such a wonderful gift with him. He praises the Lord every day for both his spiritual and physical blessings. Today, Johan owns two businesses; but that is not the best part—

Johan loves to tell people his story of deliverance from bondage. He shares on the street with people he meets and in churches as well. He has now become a lay preacher, and has helped hold evangelistic meetings in his city. Every time I see Johan, he seems happier than the last time. It makes me wonder; just how happy can a person ultimately become?

Johan’s story is a wonderful illustration of the fruits of our labor in the Dominican Republic. It has been such a blessing to see so many very damaged people come to the Lord and have their lives changed. Sadly, not all the stories have such happy endings. As I share this with you, several stories come to mind of drug dealers and prostitutes who came to Jesus but lacked faith and had no education or life skills with which to provide for their daily financial needs. These individuals have fallen back into their old evil professions in order to make enough money to survive. One is now dead due to his lifestyle.

Pastor Miguel and I have carried a heavy burden over these souls. We have wanted to start a technical school that would teach computer courses and provide the skills that these converts could use to honorably support themselves. This has been a burden on our hearts for years and the Lord is opening the way for success. Recently, a large corporation donated thirty used Dell computers to our project. What a blessing this is! Soon, we will be able to start giving people a tangible means to change their lives for the good. We will provide two training opportunities: one for people with enough money to pay and one for those who we choose to sponsor. The tuition from the paying students can provide the way for those who cannot pay. We will, of course, have some start-up costs, but we are confident that eventually this project can be self-sufficient overall.

Please pray for and support this project as the Lord leads you.