An Angel Escort on the Road to Nia Nia

I am excited to share a little about our recent trip to build the first one-day church for the Pygmies. There are nearly one million of these poor short people (adult men only get about four feet tall) living deep in the vast jungle of eastern Democratic Republic of Congo. They are the poorest of the poor and live off only what they can scavenge from the jungle and the few small animals they kill with their poison arrows and spears. In recent years, thousands and thousands of them have been slaughtered as they were caught in the crossfire of a bloody civil war in which more than 5 million Congolese were killed. As recently as 2006, the United Nations has documented cases of these people being killed and eaten by other tribes who believe the Pygmies to be subhuman. The areas where many of the Pygmies live are still very dangerous as there are numerous rebel groups in the region who often terrorize remote villages, killing, raping, stealing and pillaging the very little that these poor people do have. 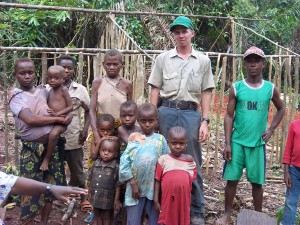 As one can imagine, it is very difficult and dangerous to forward the work of God in areas like these. The government barely recognizes the pygmies; they receive very little assistance and are not allowed to attend government schools, so they are full of superstition, customs and witchcraft, which makes bringing the gospel to them very difficult. But with God all things are possible, and He has been greatly blessing the efforts of our six full-time church planters who are working with the Pygmies in more than 30 of their camps. Congo Frontline Missions has recently started five schools and many small churches for the Pygmies. 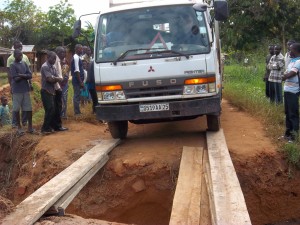 Cautiously crossing a make-shift bridge over a washout.

members there could no longer fit under the small roof they had built from jungle materials; so it was decided to erect a one-day church for them. It was quite an adventurous trip, as many often are—but, oh, so rewarding! Satan threw many problems and obstacles in our path, but with God always at our side and many people praying for us, we knew we would prevail.

It took us most of two long days, driving on some the worst roads I have ever seen or driven on in my life! In one place we had to lay planks out to cross over a large washout in the road from the recent heavy rains. In other places the ruts were so deep the truck would get stuck.The road was also very muddy much of the way as it rained at times, and even though the truck was heavily loaded, we often found ourselves spinning up one side of the rugged mountainous hills and sliding down the other. I know angels often pushed our truck along in places and held it from sliding off in others. We saw many trucks that had rolled over or had gone careening off the road and into the jungle until a large tree stopped them abruptly, and I am certain many were killed.

There were also many times when we were stopped at police or military checkpoints. At one check point Mango (one of our workers) was taken into custody and held at gun point by several soldiers because he had forgotten his identification card. Fortunately, after a bit of explanation and pleading and a few dollars, we were all on our way again. We saw numerous soldiers in places along the road or hiding on the edge of the thick jungle. Another time we were stopped by a dozen or more of them who demanded that we give them a ride on our truck. It can be a little tense trying to explain to a bunch of soldiers with guns that we are missionaries and do not haul anyone on our truck. 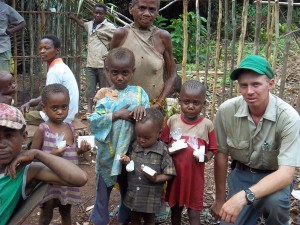 Elisha with some children and their precious new treasures—soap and salt.

We were all quite tired but very happy when we reached the Pygmies, and they were so excited to see us! Many came to watch, and some helped us to clear a site beside the little thatched-roof church where they had been gathering together to worship. After working for an hour on the church, it began to rain, so we took shelter under the small pygmy church and prepared to sleep for the night. Early the next morning, we attended the worship service the church planter held for the 40-plus people who came. Very few people in Congo have Bibles, so our church planters have a short meeting each morning. I wish you could see these simple, poor jungle people intently listening to the Bible being read and hear them sing praises to their Savior in four-part harmony. It is just beautiful! 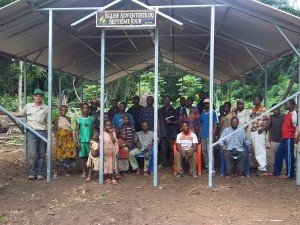 The new one-day church for the Pygmy believers.

We finished building the church by noon, and a few of us went to visit some of the Pygmies in one camp, to bring them some salt and soap. I have never in my life seen people so poor or so sick, and with so little. These people have nearly nothing! Their homes are only some palm branches fashioned in the shape of an igloo. All they have to eat is what they scavenge from the jungle. They showed us where they had recently buried several who had died, and there were many more who looked more dead than alive. We gave medicine to several who were suffering from malaria and gave them some rice and beans as well, for which they were extremely grateful. 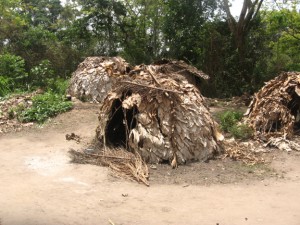 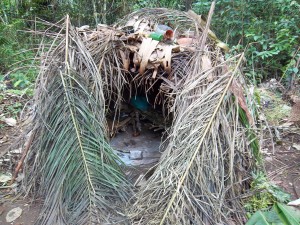 A Pygmy dwelling made of palm fronds. 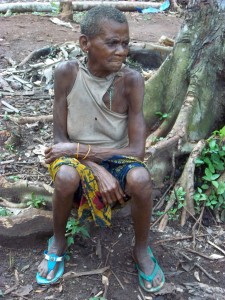 Sadly, we could only stay with them for a short time as we needed to travel on to the next site where we would build another church for a different group of believers the following day. By God’s grace we have been able to put up 30 of these one- day churches in 2011, scattered all across central Democratic Republic of Congo, which have been a tremendous blessing to hundreds and hundreds of people.

Please remember to earnestly pray for these poor people and for the church planters who face incredible odds and great danger, who risk so much and put all they have on the line to further God’s work. Thank you so much for your prayers and support. We at Congo Frontline Missions pray that God would bless each of you.