Let none indulge the thought that we have attempted too much. No, no; we have attempted too little. The work which we are now doing ought to have been done years ago. Our plans must enlarge, our operations must be extended. What is needed now is a church whose individual members shall be awake and active to do all that it is possible for them to accomplish.

“We are not left alone in this work. We are laborers together with God, in partnership with divine resources. The Lord has agencies that he will put in operation in answer to the importunate prayer of faith. He will fulfill his word, ‘Lo, I am with you alway, even unto the end of the world.’ The Captain of our salvation is on every field of battle where truth is waging war against error. The truth which we profess offers the highest encouragement to the most devoted self-denial and persevering effort that mortal energies can bestow. We should have the courage of heroes, and the faith of martyrs.” Historical Sketches, 294. 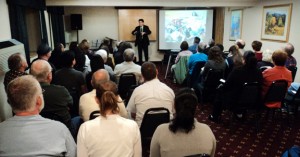 Cody Francis shares the truths of Bible prophecy in a packed room.

One of the most important decisions our church made in 2011 was to adopt a more aggressive outreach plan, and the Lord has blessed and helped us. Too often we are satisfied with just having a good church to attend, but we are told that the church was organized for service. Therefore a church that is not active in evangelism and service is not fulfilling the true purpose of the church. This decision has led to almost every person in our church being noticeably busier than before, but we have also witnessed an increase in the spiritual vitality as well as the numerical growth of the church.

As plans were laid and preparations made for our most recent evangelistic prophecy seminar in the autumn of 2011, the church decided to have 40 days of special prayer preceding the seminar. Because our church members live far apart and have varied and busy lifestyles, physically meeting for prayer was not possible, but each morning at 6:30 those who were able joined in a conference call to share and pray together. While some were still at home, others were on the way to or already at work, but wherever they were, they picked up their phones for 20-30 minutes of united prayer and discussion for the success of the evangelistic program, the outpouring of the Holy Spirit and other prayer requests. Members began to see answers to prayer even before the start of the evangelistic program.

On September 30, 2011, the opening night of the seminar, we were eager to see how the Lord would work. Flyers had been mailed, door-hangers had been hung, business cards handed out and radio and television ads aired, but it was only the Holy Spirit that could bring the people. There were a few early-birds, after which our registration table was suddenly overwhelmed and the narrow walkway jammed with people. The small rented hotel conference room (the only available venue we could find) began to fill and then overflow. All of the chairs were used, and we had to get stools from the hotel’s breakfast nook! There was standing room only, with church members having to stand out in the hall. We counted 57 guests that night. We sincerely praised the Lord and prayed for his continued blessing.

Although the numbers reduced, which is normal, the room was still full most nights. We could see familiar faces returning each night, and the interest was high. 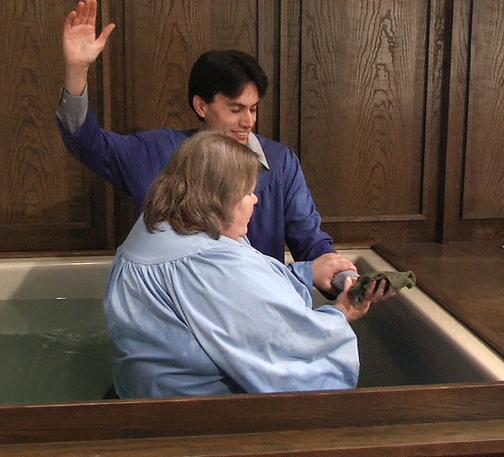 Another sister signifying her full surrender through baptism.

I remember one night when I sat down behind a lady who had very faithfully attended. She turned around and asked me, “Can I ask you a question?Why don’t you and your husband wear wedding rings?” I was a quite surprised and replied that we felt it was unnecessary as deportment is what really shows that we are married. As our conversation continued, she commented, “Your husband just showed me from the Bible that Saturday is the Sabbath.” It was apparent that the Holy Spirit was impressing the truth on this lady’s heart. She still has quite a bit to learn, but we pray that she will continue to take steps of commitment and that the Holy Spirit will continue to open her heart to the truth.

Another lady who came almost every night had just moved to a new apartment a couple of weeks before the seminar started, where she received two flyers in the mail. She says that the Lord really wanted her to attend. Her heart was open and ready to accept the truth. She is presently preparing for baptism, and her son and daughter-in-law, who were already Adventists, have begun attending our congregation and inviting friends and family.

There are a number of other very interested souls as well. Some have requested baptism and some have not yet, but we continue to study with and pray for them. 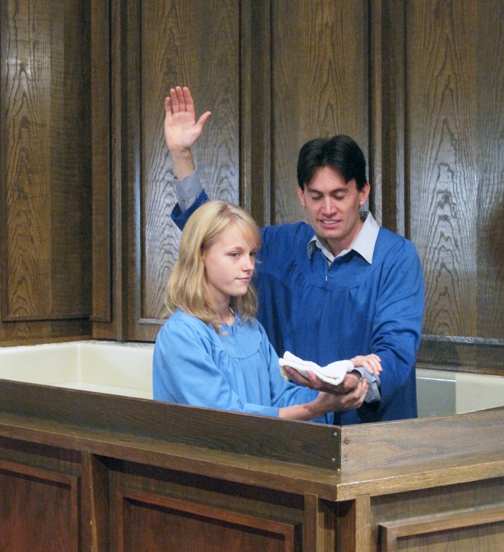 Kirsten gives the strength of her youth to Jesus.

One blessing that we were able to have during the seminar was being able to have a baptism of three dear sisters in Christ.

Immediately following the main evangelistic seminar, we started holding an interactive-style Revelation Seminar two nights per week at the church. This has provided an opportunity to get to know some of the good interests better and to review what they have learned. This follow-up seminar continued through December.

We are continuing to pray and work to reap in the contacts. At the same time, we are looking forward to the end of February 2012, when we will begin another slightly shorter evangelistic seminar. We will again seek the Lord in special prayer together for a few weeks before the meetings begin. It is only He who can bring success, and it is His work that we are doing.

“Throughout His life on earth, Jesus was an earnest and constant worker. He expected much; therefore He attempted much. After He had entered on His ministry, He said, ‘I must work the works of Him that sent Me, while it is day: the night cometh, when no man can work.’ John 9:4. Jesus did not shirk care and responsibility, as do many who profess to be His followers. It is because they seek to evade this discipline that so many are weak and inefficient. They may possess precious and amiable traits, but they are nerveless and almost useless when difficulties are to be met or obstacles surmounted. The positiveness and energy, the solidity and strength of character, manifested in Christ are to be developed in us, through the same discipline that He endured. And the grace that He received is for us.” Desire of Ages, 73 (Emphasis supplied).