We Have Found the Property!

This is the property,” was the email title Luciano Campos sent Giancarlo De Miranda early in November 2011. Luciano urged his fellow workers to come and see the property he had found. “I was tired of searching for land, and I had determined to restart my searching efforts only in 2012,” said Luciano, “when our real estate agent called me telling me that he had found a property like the one for which we had been searching.” Luciano had heard that story many times before, but an impression compelled him to see just one more property in the year of 2011. 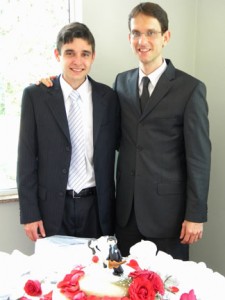 Luciano and Maxwell Trancoso, faithful believers in SETI (Santo’s Evangelistic Training Institute), the future training center, were impressed with the property: one three-story house, one duplex, another family house, a building with two rooms and a garage, a small storage building, a small barn; and as if these were not enough, a beautiful garden with an irrigation system producing chayote, bananas, cucumbers, ginger, oranges and tangerines, plus a lake, water spring.

Giancarlo De Miranda and Erich Assuncao, the other two young men involved in the SETI project, scheduled a day to visit the property with Luciano. On November 19, they visited the Kempim’s farm. All of them agreed that they should try to negotiate with Mr. Nelson Kempim. It was the perfect place to develop a missionary school according to the principles of the Word of God. “I want R$350,000 (Brazilian Real—about $196,000 US dollars) and a down payment of R$200,000 ($112,000) by December 7,” affirmed Mr. Nelson. That was 19 days to the dead line. After the young men explained the real financial situation of the project, Mr. Nelson lowered the price to R$320,000 ($179,000), but he showed himself inflexible to lower the down payment. The Kempim family were Lutheran Christians, and the project touched their hearts. Although Mr. Nelson had other offers for the property, he gave preference to us because he wanted to leave his property in good hands.

It was time to count the money. The project had R$50,000 ($28,500). Could they raise the rest of the money in such a short amount of time? Should they go ahead and tell the supporters that they had found the property and start a bold fundraising project? A decision had to be made, when Erich said, “When King David gathered the material to build the temple of Jerusalem, he used his personal resources, too.” Giancarlo agreed, and a decision followed and action was taken. They began their fundraising project with themselves. By faith they told Mr. Nelson that they would buy the property on December 7, 2011.

Luciano and Giancarlo visited the brethren in the state of Espírito Santo, showing pictures and telling the qualities of the property, thus inviting Seventh-day Adventist members and others out of the Adventist faith to help with their means. The money came from different places. Two institutions, friends of SETI project, joined SETI to help with the fund raising effort: Hartland Institute and Taquara Institute. “When God’s people come together with the purpose to do God’s work, it can be very powerful,” said Giancarlo. God’s people truly came together to raise the money for the purchasing of Santo’s Evangelistic Training Institute. “Behold, how good and how pleasant it is for brethren to dwell together in unity!” Psalms 133:1.

Joyde Damasio is one of the supporters. When she heard the good news of the property, she said, “Go ahead and make your best efforts to raise the money and at the end I’ll match whatever is needed.” What a courageous and self-sacrificing spirit! She is not a rich person; she just could not allow herself to use her life savings to buy a new car and repair her apartment while God’s work was in need of her help. 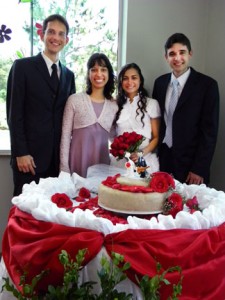 Giancarlo and Erich with their wives, Tatiana Miranda and Rebecca Assuncao.

One afternoon Vera Gomes, a friend of SETI’s team, said, “Let’s go visit my sister; I believe she might lend money to the project.” Her sister is not a Seventh-day Adventist. Giancarlo did not feel comfortable borrowing money from someone out of our faith, so he said, “Vera, let’s go there, but we will not borrow money from her. Let’s present the project and let the Spirit of God touch her heart.” “This is not going to work! I know my sister,” said Vera. To the surprise of everyone, Ms. Nair Gomes made a reasonable donation, thus fulfilling the promise that those not of our faith would send means to God’s servants to do God’s work.

The contract was signed; the down payment was made—praises to the Lord! Now there is a lot of work to be done. The Institute has the challenge of raising R$120,000 ($68,500 dollars) by June 7, 2012. Luciano, Erich and his wife Rebecca are already at the property, and as of the writing of this, other staff members plan to join the Institute in February.

When asked why they chose that property, the founders will not hesitate to say that that property matches all the qualifications given in the Spirit of Prophecy for the establishment of a missionary training school. These qualifications are buildings already erected, a location in the countryside, a garden at full production, plenty of water, a price below the market price. Of course, the providential leading of God and the miraculous fundraising gave even more evidence of God’s will. These young men, Giancarlo, Erich and Luciano, have the burden on their hearts to offer to the young people in Brazil the true science of education, an experimental knowledge of Jesus Christ.

“Now, as never before, we need to understand the true science of education. If we fail to understand this, we shall never have a place in the kingdom of God.” Christian Educator, August 1, 1897.

By Giancarlo De Miranda. Email: giancarlo@iceves.com. SETI is this quarter’s Thirteenth Sabbath Project. Turn to the back of the magazine for more information about how to help with getting this school established.