Have you ever felt as if you lived in a fish bowl? As if everything you did was playing on a large screen for all to see and 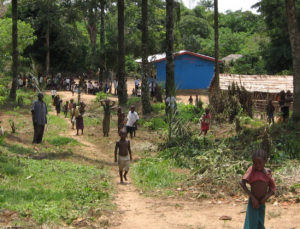 New church and school in Congo

comment upon? Whether we realize it or not, this is exactly the experience that we all have! Paul says, “We are made a spectacle unto the world, and to angels, and to men.” (1 Corinthians 4:9) Our lives are on the big screen. We are living in a fish bowl, but not only a fish bowl to our neighbors, friends, co-workers and family, but the fish bowl of the universe! The entire created worlds are gazing down beholding our act in the drama of the great controversy. “The sons and daughters of God have a great work to do in the world. They are to accept the Word of God as the man of their counsel and to impart it to others. They are to diffuse light. All who have received the engrafted word will be faithful in giving that word to others. They will speak the words of Christ. In conversation and in deportment they will give evidence of a daily conversion to the principles of truth. Such believers will be a spectacle to the world, to angels, and to men, and God will be glorified in them.” In Heavenly Places, 67. Are the watchers and holy ones beholding with delight the theater of God’s grace in our lives, or is the universe holding its breath in fear of the precipice of disaster we are treading?

Recently, it was forcibly impressed upon my mind again how much of a spectacle we really are. We were in the Democratic Republic of Congo traveling to new and visiting existing mission fields, and the further we got off the beaten path, the more of a spectacle we were. Men, women and children would gather around us and watch for hours even though we were doing nothing unusual—simply because we were a spectacle! While being such a spectacle is not always the most enjoyable, being out in the wild bush of Congo, where the Three Angels’ Messages is spreading faster than anyone can keep track, definitely is exciting! It has been several years since we had been able to visit the mission work of Brother Kasongo and his team of Bible workers, and so we were eager to be there and observe the progress of the work ourselves. Indeed the message is leaping from village to village and territory to territory. In the couple of weeks that we were able to be there, we visited many villages, saw churches that have been built, schools that are instructing thousands of youth for usefulness in this life and the next, and met thousands of honest searchers for truth. We would travel to a village; the chief would then announce that we had arrived and invite the village to hear the message that we were bringing; we would share an aspect of the Three Angels’ Messages, and then we 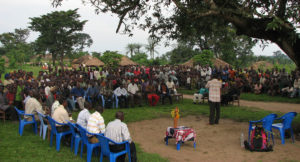 Village listening to the words of truth

would open the meeting for questions. As the judgment, second coming, Elijah message, true gospel, etc. were shared, the Holy Spirit was present to convict hearts. Many times the crowd would begin to tremble, thinking of the judgment, and like Saul on the Damascus road ask, “What should we do?” (Acts 9:6) There were always questions in regard to the Sabbath, which when answered from the Word of God brought a determination to stand upon their new-found truth. As they saw clearly the Biblical evidence, many felt betrayed that they had never heard these precious truths before. May we not be guilty of betraying our brethren there! Probably the greatest of many needs there is for local workers to go to these searching villages and instruct them more plainly in the way of truth. Already there are over thirty sacrificing workers who have given themselves wholeheartedly to teaching and preaching the truth; but these need support, and more are needed, and we need your help to make this reality. Bibles and Bible studies are also greatly needed to ground the new believers permanently in the truth. Would you like to help rescue thousands from the darkness of ignorance, superstition and fear in this unreached section of Congo? Please pray for and consider how you can help to further this explosion of truth.

Yours in the hope of a quickly-warned world,