“Ye are the light of the world. A city that is set on a hill cannot be hid, Neither do men light a candle, and put it under a bushel, but on a candlestick and it giveth light unto all that are in the house” Matthew 5:14, 15. 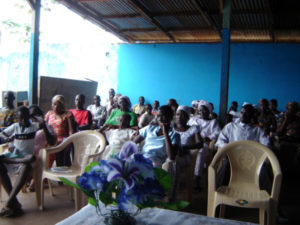 Our Savior in His sermon on the mount challenged His followers to shine after giving them the light, which is the truth. Our light must shine forth until precious souls are brought to take their stand on the Lord’s side.

“The world is the field for the gospel minister, and the whole human family is his congregation. When he has finished giving a discourse, his work is only just entered upon; for the word of life is to be presented from house to house. The truth must be carried from city to city, from street to street, from family to family. Every method by which access may be gained to the homes of the people must be tried; for the messenger must become acquainted with the people. The truth must be carried from province to province, from kingdom to kingdom. The highways and byways must be thoroughly gleaned, and the message must spread from continent to continent, until the whole earth is belted with the gospel of our Lord Jesus Christ.” Bible Echo, May 21, 1894.

A few months ago, our quest to obey the gospel commission took us to Pramkese in the eastern part of Ghana, a new field that has not been entered before with the Three Angels’ Messages. In the later part of 2006, one of the evangelists in the Historic Adventist Church by the name of Evangelist Baidoo with his family of four moved to this town and started a kindergarten school. He called me last year to tell me that the Lord had blessed his school and he had over a hundred children. He also started house-to-house evangelism, so with his family as the core of the church, the town was ripe for a public crusade. We prayed fervently about it, asking the Lord to lead in this public campaign. We also made some visits to strengthen his efforts. No wonder we had a very big crowd attending every night. By 6:00 pm on the first night, everything was set-the PA 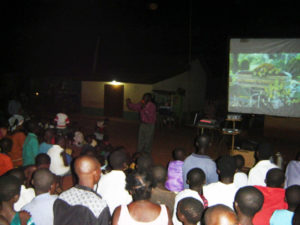 An eager audience follows the pictures and words on the screen.

system, benches, chairs and lighting were ready and in place, with our generator as back up. In fact it was the talk in the town that no church had ever organized a public crusade continuously for two weeks with a different topic being presented every night. What thrilled them was the PowerPoint presentation: that everything we quoted from the Bible was projected on the big screen. This attracted almost the whole town every night to come and listen to the Word of God. After the first week, some pastors and elders of Sunday churches in the town saw us as a threat to their churches, so during the last week of the campaign they also started organizing programs in their churches and some using television to keep the members from attending the crusade. When these leaders realized that the TV was not working, they resorted to attacks. While the preaching was going on these leaders were also busy looking in the crowd and sending their members away. It was very sad. No wonder we are told in inspiration that church members who are not saved will rush on their leaders to demand justice for not telling them the truth.

One interesting testimony I would like to share was during the day we would go from house to house to follow up on the topic preached the night before. On one of these visits, we met three men, all in different churches discussing our program. They were members of the Church of Christ, Presbyterian and a Church of Pentecost respectively. From experience wherever we go, we always have problems with Church of Christ as they are against the Sabbath and the Three Angels’ Message. This time this brother from the Church of Christ said, “I like the way you presented Daniel chapter two, but you erred by saying that we are waiting for the Stone Kingdom which is Christ’s Kingdom, because the Kingdom has already come.” I was shocked and surprised to hear for the first time that a member of Church of Christ said this. I know this to be the doctrine of the Jehovah’s Witnesses. I took the time to explain to him and all the people around about the “two kingdoms,” the kingdom of grace in which we are living right now and the kingdom of glory which our Savior is yet to bring and that is why Daniel 2 said it will crush every kingdom in this world and it will remain forever. He understood it. Praise the Lord! He then quickly jumped to the Sabbath saying that it was given to the Jews. I took my time explaining the Sabbath from Genesis, how God gave the Sabbath after Creation so that He could meet with His people even before sin came into existence, hence if you call the Sabbath a delight, an honorable day, an holy day, and shall honor Him not doing your own things but rather choose to meet with the Lord on the Sabbath day, then you will be blessed. The Spirit of God was manifested greatly, and all around saw the need to keep the Sabbath, including our Church of Christ friend who had raised the challenge. Unfortunately when the leaders of the Church of Christ congregation saw that their member was studying with us they convinced him not to study with us again. But I thank God that the seed had already been sown in his heart and someday it will germinate. God has said His Word will never return to Him void. 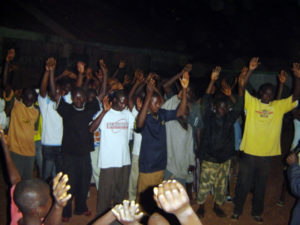 Hands raised during an altar call.

The Lord blessed and the crusade came to an end successfully and a new church has been planted in this new area. Please remember these precious souls in your prayers as we prepare them for baptism.

Close to this town is another town “Abodom” where about three years ago I went to plant a church. So after this crusade, I continued my journey there for another ten-day crusade and also stayed for another two weeks for follow-up work. The Lord really blessed that we had new converts who are now keeping the Sabbath. It was interesting to note that some who heard the message three years ago but did not make the decision for the Lord have now made the decision.

Once again I am using this opportunity to thank you for your support that has made this a reality. Some day we shall all smile with these souls in heaven if we do not faint and will hear their testimony: “‘When despair bound my soul in unbelief, the Lord sent you to me,’ they say, ‘to speak words of hope and comfort. You brought me food for my physical necessities, and you opened to me the Word of God, awakening me to my spiritual needs. You treated me as a brother. You sympathized with me in my sorrows, and restored my bruised and wounded soul, so that I could grasp the hand of Christ that was reached out to save me. In my ignorance you taught me patiently that I had a Father in heaven that cared for me. You read to me the precious promises of God’s Word. You inspired in me faith that He would save me. My heart was softened, subdued, broken, as I contemplated the sacrifice which Christ had made for me. I became hungry for the bread of life, and the truth was precious to my soul. I am here, saved, eternally saved, ever to live in His presence, and to praise Him who gave His life for me.'” Gospel Workers, 518, 519.