Right after we finished the meetings in Chepen-La Libertad-Peru, we traveled to the city of Chiclayo (almost 500 miles north of Lima, Peru) with brother Bob Henricksen to start the first scheduled meeting. The small group of brothers and sisters in the area volunteered to help by announcing the first meeting in the north neighborhoods of the city. They used a megaphone and passed out small fliers from door to door and in local stores. There was also a large announcement poster placed at the corner of a very busy street. 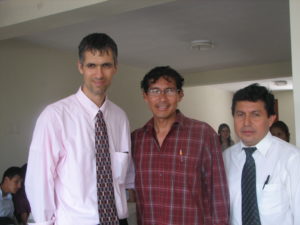 We were thrilled when on the first night there were over 80 people in attendance. About half of those were non-Adventists. All were interested in the brief health talk given at the beginning of each meeting. Several of the attendees had illnesses and so were especially interested in the health lecture. The health lecture was followed by evangelistic presentations covering the Three Angels’ Messages and other basic doctrines. We tried to make house calls on those attending the meetings. In these we offered to help answer any questions about the Bible that they might have and we also offered free medical consultations during these visits.

We continued this format for one week and then on the second week, the Bell family presented their demonstrations of cooking and natural home remedies as well as teaching family principles.

One of the interesting people who attended the evangelistic series was a brother named Juan. After the first night, he asked us to visit him. We found that he lived in a very small room. He was a mathematics teacher in one of the local schools, but he was suffering from a lot of family and financial stresses. He told us that his father was a pastor in a Pentecostal church and that all of his family was Pentecostal. He had been searching and had visited several different churches including the Central Seventh-day Adventist church there in Chiclayo. He had requested Bible studies from the brethren at that church and some had come to his house and given him Bible studies. When he asked them different questions about the Bible, one of his questions had stumped them so they said that they would get back with him about it, but no one had returned to visit him in an entire year. 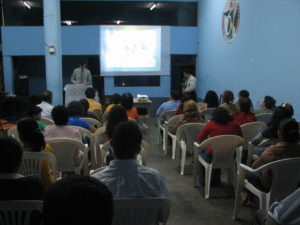 Meeting with Juan was one of the nicest experiences. We could just see a soul hungry for the truth. On the first visit, after he presented a long list of objections that he had received from his church, he made it clear that he was not asking with the purpose of debating or arguing with us, but that he had noticed some inconsistencies with the teachings from his Pentecostal church and he was looking for answers that were based on the Bible only. We studied with him day after day for 2-3 hours each day. Subject after subject was presented. The most impressive response was when we studied “speaking in tongues.” Several Bible verses were presented together in order. He was using his own Bible to look up the verses. After just a few, his answer was: “Now, I understand. I need to explain this to my relatives.” We tried to show him more Bible verses but he said, “That is enough. I believe it. Now I know that the Pentecostal teachings are wrong. This is how I need to study the Bible.” The power of God’s Word and the power of the Holy Spirit were working in Juan, giving him conviction right in front of us. Night after night, Juan was in the meetings. On the last day of the meetings, Juan stood up and expressed that he had decided to switch churches and desired to become a Seventh-day Adventist. Everyone was glad to hear his decision. Even as we moved on to our next locations, Juan followed along with us and attended those meetings as well. And then after Brother Bob and the Bell family left Peru, I continued to study with this brother. Every afternoon, we would study, and he would ask so many questions. And I still communicate with him via phone and e-mail. I share Bible promises when he expresses his concern about the many family and financial issues in his life that are overwhelming now. He is currently going through a divorce and dealing with child custody issues. The devil is definitely attacking him.

Another interesting person was Sister Maritza from the local church. When we arrived she had just returned to Peru from a long trip out of the country. She had been gone for several years working overseas. She had returned to start a small business and to reunite with her mother and two daughters in Peru. She very actively helped us during the meetings, but she had one very big concern in her life-her mother. Her mother had been very sick for over a year and had been seen by several doctors, had been administered many tests, was taking numerous medications and was still sick. She had a combination of depression, gastric symptoms, fatigue, headaches, insomnia, intolerance of several different foods, etc. Sister Maritza brought her mother to me for a health consultation. I reviewed all her lab results, medications and symptoms but when inquiring in detail into her lifestyle, I found that some changes could be done according to the eight laws of health. I started seeing her every week to review her changes and add little by little more changes. As I saw her each week we were able to start weaning her off of her medications. To the glory of God, after three weeks of consultations she was able to totally discontinue her medications. She was then walking around forty-five minutes a day, drinking almost six glasses of pure water and abstaining from all red meats. Sister Maritza was thrilled to see the change in her mother. She was active. Her mood had improved and she had a smile on her face. She could tolerate foods that she had not been able to tolerate.

All of these blessings brought stronger convictions to Sister Maritza. She was very convicted by the health message. She had never heard these kinds of things before. When she started making these changes, she was encouraged that more changes would come in her home as she had issues with her teenage daughters. She was able to bring them to the meetings each night and by the end of the series her whole family was attending church on God’s Holy Sabbath day and having regular family worship. They continued after the series with Bible studies, using the “Steps to Life” set of lessons. And I recently received news from the elder of the church there that they have finished the studies and been baptized.

It is such a wonderful experience to work for the Lord and to see some of the results. I just praise Him for this experience and the blessings that I received by witnessing people changing their lives and surrendering their hearts to Jesus.

Your prayers are needed. If you feel willing to volunteer to help or to make a contribution please contact me.