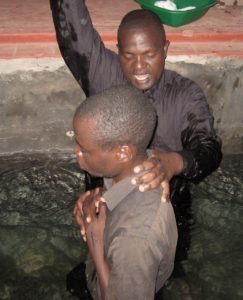 A recent baptism in Malawi

As Joshua faced the promised land, the Lord gave him a solemn charge and promise: “Be strong and of a good courage. . . . This book of the law shall not depart out of thy mouth; but thou shalt meditate therein day and night, that thou mayest observe to do according to all that is written therein: for then thou shalt make thy way prosperous, and then thou shalt have good success.” Joshua 1:6, 8. God still desires “good success” for His people, but we must remember the principles that make true success possible. “As God’s workmen bear responsibilities and carry burdens in the great harvest field let them remember that true success comes from God alone, and that every particle of the praise and glory belongs to Him.” Manuscript Releases vol. 21, 400. While we must depend wholly upon the Lord for success, factors in this life affect success, as well. “Diligence, honesty, thrift, temperance, and purity are the secret of true success.” “Success in any line demands a definite aim. He who would achieve true success in life must keep steadily in view the aim worthy of his endeavor. Such an aim is set before the youth of today. The heaven-appointed purpose of giving the gospel to the world in this generation is the noblest that can appeal to any human being.” Education, 135, 262. Like Joshua, we have the highest aim of all set before us. As we seek to take the gospel to the world, following the principles outlined in His Word, God will give true success in this worthiest of all pursuits.

People gather to hear the message proclaimed by Brother Golden

In the African country of Malawi, the Lord is blessing His work with success through the labors of Brother Golden and other faithful workers. Even in the difficult Islamic areas, the Lord is giving Golden the key to reach many hearts. When he first goes into the village, he introduces himself to the village chief and tries to discover the needs of the villagers. He then begins to minister to the people’s needs—supplying food, clothing or other needs. Because of this humanitarian work, the chief will frequently endorse Golden’s work, which opens the people’s hearts to attend Golden’s gospel meetings and hear the Three Angels’ Messages. When Golden presents the truth of salvation through Jesus, he often shares how Abraham took his own son to sacrifice. This beautiful story becomes a bridge for sharing how God gave His Son to be sacrificed on our behalf. In the villages where Golden and the other workers have entered, dozens have decided to be baptized and stand for the truths of the Adventist message—and thus new churches have been started. Recently, the team worked in a village that was home to a Muslim army officer who was so opposed to the preaching of Christianity that he hired a gang of youth to throw stones and shout during the meetings. This continued for several nights, but the evangelistic team kept praying that the Lord would eliminate the distraction. One evening, the officer and his wife visited the meeting location to see if the unruly youth were doing their job. As he heard the message, the Holy Spirit began to convict the man’s heart. He called the leader of the gang to stop the distruption and come listen to the meetings. As they continued attending each evening, the Lord continued working on their hearts, and the officer, his wife and some of the youth they had hired all made the decision to be baptized!

Please pray for Golden and his evangelistic team that the Lord will continue to bless them with “true success” for His Kingdom. If you would like to help them with their work, you can mark your donation “Malawi.”

Yours in praying and working for true success,