“All power is given to Christ, in heaven and in earth, and He will impart strength to His followers for the great work of drawing men to Himself. He is constantly urging His human instrumentalities on their Heaven-appointed ways, in all the world, promising to be always with them. Heavenly intelligences…are sent as messengers to the world, to unite with human agencies for the salvation of souls…Why, I ask, in view of the greatness of these truths, are not all who profess to believe them inspired with missionary zeal, a zeal that must come to all who are laborers together with God?” Counsels on Health, 32.

The very life and welfare of the church depends on the faithfulness of Christian workers to fulfill the great commission. To neglect this divinely appointed task is to invite spiritual feebleness, decay and eventual death. Where there are no missionary activities or foreign mission programs, love soon wanes and faith grows dim and disappears.

Ministry of Healing page 143 tells us, “Christ’s method alone will give true success in reaching the people. The Savior mingled with the people as One who desired their good. He showed His sympathy for them, ministered to their needs, and won their confidence. Then He bade them, ‘Follow Me.'”

Equipment ready to be taken to the site of the crusade.

Precious souls are perishing in their hopeless condition. Every day we hear and witness fatal accidents on our major roads. Terrible and serious maladies are afflicting people, sending thousands into their graves without hope. Why are the soldiers of the cross waiting to reach these hopeless souls?

Christ drew the heart of his hearers to Him by the manifestation of His love, and little by little, as they were able to bear it He unfolded to them the great truths of the kingdom. We must learn to adopt our labors to the condition of the people, to meet men where they are. The love of Christ is the only power that can soften the heart and lead to obedience.

Just after the Tema crusade in November last year, the church here started to grow as we received new souls nearly every Sabbath. The finger of God is leading the work. The Bible workers are seriously doing the follow-up work.

One Sabbath day when the janitor and his helpers went there to make the place ready for the service, they saw the doors tightly locked. We had to find another place for the service that Sabbath. Three days later, we received a letter from the Tema Metropolitan Assembly banning all churches from worshiping in government schools.

The church later sent a delegation to meet the school management committee, and after much deliberation, they agreed that we could worship only on Sabbath mornings. We have been given until the end of this year to find a new place of meeting. Tema is rated the fourth largest city in Ghana after Accra, Kumasi and Sekondi-Takoradi, and it is the main port city in Ghana. Renting accommodation is very expensive, likewise auditoriums for church programs. We negotiated with a private man for his hall to be used as a meeting place, but the charge was too much for us. The rent advance for a period of one year was almost $5,000. After considering the cost involved we thought it wise to buy a plot for the church building. We have been able to secure one with a given price of about $15,000. 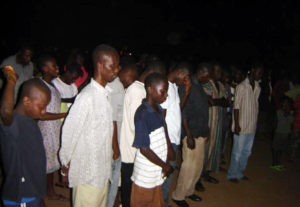 Precious souls who answered the call to follow Jesus all the way stand for prayer.

One interesting thing is that despite all of these problems facing the church the Bible workers are still busy with their evangelistic activities. A new door has been opened in one community, another suburb of Tema. A group of about ten people have accepted the Third Angel’s Message. Of these newly committed souls, some were chain smokers and drunkards. We are now meeting under a tree for our evening Bible studies. They have surrendered their lives to Christ. Mr. Smith a middle aged man has surrendered his life to God and is now helping us to secure the church plot. These converted brothers and sisters have confessed Jesus as their Savior and given their lives for the truth.

One evening, when Bible studies were in progress, under the tree, a Brother James (a fire service worker) was passing by, but stopped abruptly, and after listening to the lesson attentively he confessed that this is the church he was longing to join. He is now studying with us. It was all joy that very night for that one soul who had accepted Jesus into his life. My prayer is that the good Lord will open the way for the church in Tema to triumph.

Another man named Mr. Mensah who has been a missionary in Europe and other foreign lands is also studying with us. This man is faithful and so happy with the Advent Message. He has openly confessed that, though he has been studying with different churches, the Historic Adventist Church has the truth leading to salvation. This man has communicated our message to his wife, and the wife has accepted the Historic faith as well, and has committed herself to the Sabbath truth.

Immediately after the youth camp, which was held in Accra early last Fall, the Bible workers in the Southern district organized themselves to commence with a crusade in the Tema community. The crusade was called the “What Must I Do to be Saved?” Crusade. The ten-day evangelistic program was successful. As many as two to three hundred attended each night. On the last night, about thirty-five new souls committed their lives to the truth. Mission Project International assisted the Tema program with Bibles. We distributed them to forty students who did not have their own Bibles. They were so happy and many are now attending our nightly Bible studies. Five to ten new souls visit the church every Sabbath as a result of these studies. Praise God for His wondrous love, for the lost souls.

In Acts chapter two, God added to the church daily, because the believers were of with one accord. This bond of unity among believers in the apostles’ day was the prerequisite to their success. We pray that the Lord will continue to gather the outcasts of Israel. Only the finger of God can finish the work triumphantly. May the good Lord bless His workers and their sponsors and establish them on the platform of truth.