“Likewise the Spirit also helpeth our infirmities: for we know not what we should pray for as we ought: but the Spirit itself maketh intercession for us with groanings which cannot be uttered. And He that searcheth the hearts knoweth what is the mind of the Spirit, because He maketh intercession for the saints according to the will of God. And we know that all things work together for good to them that love God, to them who are the called according to His purpose. For whom He did foreknow, He also did predestinate to be conformed to the image of His Son, that he might be the firstborn among many brethren.” Romans 8:26-29.

In August 2008 my husband and I went to Romania on a mission trip. As we were there, we discovered how some people are working very hard to distribute truth-filled books. I want to introduce you to Gàbor Demeter, who is one of them. 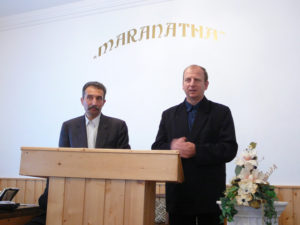 Gabor (left) shares his testimony in Hungarian, while it is translated into Romanian by the man on the right.

Gàbor was born in a gypsy family. His father had a very good job, but he used all the money to buy drink. One day Gàbor’s mother received an invitation to go to church. She went to church and began attending regularly, taking Gàbor with her. At the same time Gàbor’s father and brother were drinking together with a police friend. One day the friends told his father that he ought to be a strong man in the family and forbid God in his home. First the mother did not take it seriously and she went to church again. But her husband became very angry and began to fight with her. He threatened her and the Adventists saying he would put petrol on the church and burn it, if she went to church again.

Gàbor’s mother stopped going to church, but every Sabbath she would cry. Then she told Gàbor that he should go to church although she was not able. He went to church alone, but it was not long before he stopped and slowly he became worldly.

Some years went by before God solved the problem. Gàbor’s father got into trouble. His wife told him that now it was time for him to make a decision, either he would stay in trouble or he would have to go to God and tell Him that he wanted to change. She begged him to go to church at least once. Again he became angry and she went into another room and cried. When she came out again he said that he had never realized before how much she cared. He agreed to go to church, but only if it could be in secret. He was ashamed to have his friends know where he was going.

He kept his word. As he was sitting in church he puzzled over how it was possible for a man to be in the very same church that he had so recently wanted to burn. The prayer meeting began at 9 o’clock. After a short sermon, people began to pray. A sister prayed: “Dear God, someone is here, who has never been here before. If he has a problem then please show him how much You love him.” Gàbor’s father was a strong and cold man. He had never cried before. But as this lady prayed tears came to his eyes. The Holy Spirit began to change him and make him a better father. From this day on things changed in  the family. Gàbor was 13 years old at that time and had four younger brothers.

It was difficult to buy a Bible, as they lived in a communist country. The one they found did not have all the books of the Bible in it. Gàbor was the only one in school, so he had to read the Bible for all the family.

The family moved back to the village where they came from and people began to ask many questions about their new lifestyle. The father asked his son to show them the answers from the Bible. As they began to visit all the relatives to tell them about their new faith, Gàbor realized that it was necessary for him to learn more. He went to a faithful pastor who taught him about all the truth. 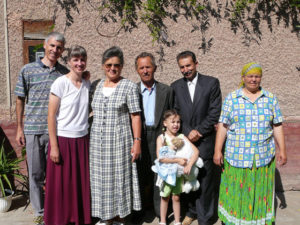 Mario and Lena Clerc, Baba and Zsigmund Bela, Gàbor and Terez Demeter and their granddaughter.

Gàbor’s family belonged to the gypsy class whose job it was to repair the roofs. Now they had a new faith and they began to share it. Every family whose roof they fixed was left a book. And when they shared a ride with someone on the road, they too received a book.

Gàbor told me that over the years the Lord has worked in his life and helped him to make three major steps. The first major step was to be baptized in 1973 when he was 17 years old. He had read and studied his Bible very well as he had to study for his parents too, who could not read. The desire grew in his heart to preach the Word, so when he was in a forest he stopped and began to preach to the trees. He explained the goodness of God to the forest. In this way he learned to preach.

Gàbor’s second major step was in 1980. The President of Romania, Ceausescu, decided to get rid of all the gypsies. It was a terrible political decision as there are many gypsies in Romania. They began to put gypsies in prison and kill them without reason. Gàbor couldn’t understand and asked God, why? God told him that he should just keep quiet, because God knows. He was in prison as well as his father. The first Sabbath he told the commander that he was willing to work every day except Saturday because it was the Sabbath. He offered to stay longer in prison, but on Sabbaths he would not work. He was then put in solitary confinement for nine days. Every day they came and punished him and every day they took him to a committee where he had to answer many questions about his beliefs. But he was not ashamed to believe in Jesus so he faithfully witnessed about Him every day. During this time he promised God that his life would be His if He would take him out of the prison. For three days a man came and stayed with him. Nobody knows who he is, or what his name is, or whether he was an angel.

After nine days everything suddenly changed. They stopped punishing him. After sixty days they let him out of the prison and he was free to go home to his family and tell his wife what had happened.

Gàbor’s third major step was in 2006. He was sick. His brain was blocked and it was as if he had forgotten everything except God. One morning he woke up and asked God if he had to die. After three days he woke up and slowly everything came back. He decided more firmly than ever before that he would give his all to serve the Lord, because God had always answered his prayers.

Today Gàbor is leading out in door-to-door work and holding evangelistic meetings.