According to the world clock, planet earth just passed 7.5 billion in population. There have been approximately 100,300,00 new babies born in our world to date. There have been more than 41,000,000 people that have gone to the grave just this year. With so much more people added to our planet and millions going the grave without a knowledge of the Savior, how will they be reached? Jesus taught His church how they would accomplish this monumental task. Jesus had been training his closest followers how to reach the vast multitudes.  “And as He walked by the Sea of Galilee, He saw Simon and Andrew his brother casting a net into the sea; for they were fishermen. Then Jesus said to them, “Follow Me, and I will make you become fishers of men.” Mark 1:16, 17 “For he and all who were with him were astonished at the catch of fish which they had taken; and so also were James and John, the sons of Zebedee, who were partners with Simon. And Jesus said to Simon, “Do not be afraid. From now on you will catch men.” “When Christ called the disciples from their fishing-nets, he told them that they were to be fishers of men. They were to communicate the truth to others, casting their nets on the right side of the ship. By this Christ meant that they were to work in faith to save souls. And this work for individuals would, in the providence of God, lead them to work for communities. So God desires that the youth shall become skillful, thorough laborers wearing Christ’s yoke, lifting his burdens. “We are laborers together with God,” he says.” Youth Instructor December 8, 1898 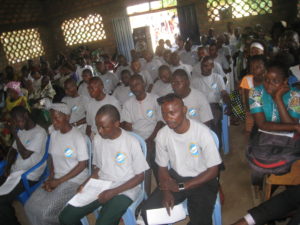 Pastor Ongasa, who was once the Conference president of the Congo, has started his ministry on the promise that God will help him to train young men and women to be fishers of men. Train Them to Fish began with the goal of training workers to reach the people of Congo and then with the intent that it would spread to all other neighboring countries. More than 200 dedicated Bible workers have been trained, 14 lay pastors have been educated and 38 new churches built since 2012. Adrian, a Bible worker that went through the training program, was sent to the village of Kimvula. His mission, to reach a sect people that believed that the Bible was only written for the White Man because blacks are not mentioned in the Bible. They also believe that Jesus is only the Savior of the white man and no one else. As Adrian was working in a village, he asked some of the local villagers if they would like to hear about a black man in the Bible. Capturing their attention, he proceeded to tell them about the Ethiopian eunuch who took the gospel to the people of Africa. From this one conversation, a church of 40 people is now gathering on the Sabbath to worship God. The Cheif of the village was convinced about Adrian’s teaching and has donated land for the erection of a church building. 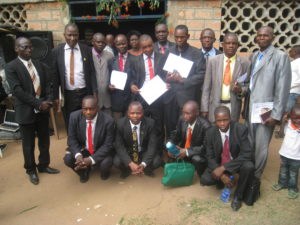 Pastor Ongasa is praying that God can use his training school to reach the 78,000,000 people of the Congo. Please pray that God will open peoples hearts to receive the gospel. If you would like to be involved in helping Train Them to Fish, mark your donations “Congo Bible Workers.”

In the Masters service,