Have you desired to be a better soul winner for Christ? You may have thought about attending a Bible Worker training school to help improve your skills to teach others about Jesus. There is one talent that we all possess that, if used, will win many to the truth. Proverbs gives us this specific instruction. “A man who has friends must himself be friendly…” Proverbs 18:24 Do we all have the ability to make friends with people we meet? What example did Jesus leave us in regard to making friends? “Now it happened, as He was dining in Levi’s house, that many tax collectors and sinners also sat together with Jesus and His disciples; for there were many, and they followed Him.” Mark 2:15 Jesus was the friend of sinners and highly sociable. Jesus’ main purpose in connecting with those of the world, was to share the message of hope. He accepted invitations to dine with the noble and the learned as well as the poor and afflicted. “He was social in His nature.” Desire of Ages, 150. Jesus was the greatest soul-winner this world has ever witnessed and following His example will reap the same results. The importance of developing friendships in and outside the church cannot be overemphasized. This will bring vibrancy to a church like nothing else can. The results of bringing a person in through friendship evangelism is that they have a greater possibility of staying in the church and maintaining a strong connection with the Lord! 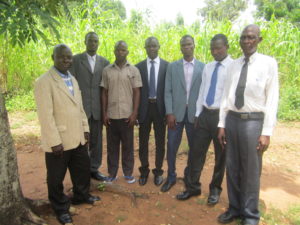 Pastor Simliwa on the left

Pastor Agamah and Paca, the Bible Worker, have taken friendship evangelism to a new level. When I first met Paca, at an evangelistic meeting in 2009, he was training to be a powerful witchdoctor in his local village. Now he is using the power of the gospel to win people to the truth. While distributing truth-filled literature, he and Pastor Agamah met a man from the Baptist church. Pastor Agamah and Paca started visiting him in his home and struck up a friendship with this man. Several weeks later, while visiting this man, he told them that he believed the message that was being taught in the material they left him. He then revealed that he was the senior Pastor and leader over all the Baptist churches in the north part of Togo. Pastor Simliwa was in a serious dilemma. If he should join the Seventh-day Adventist church, he would lose his handsome salary, his position and influence in his church and all the friends he had made. After much prayer, and study of the Bible, he took his stand for the truth. The other church leaders immediately removed him from his position and cut off his salary. There were some of his former church members who have read the material that was given to Pastor Simliwa, and have taken their stand with the Lord. Many more will follow his path of self-denial. They will pick up the cross and follow Jesus no matter what the cost. “It should ever be manifest that we are reformers, but not bigots. When our laborers enter a new field, they should seek to become acquainted with the pastors of the several churches in the place. Much has been lost by neglecting to do this. If our ministers show themselves 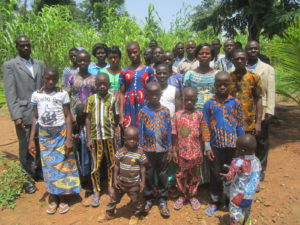 New Believers from the Baptist Church

friendly and sociable, and do not act as if they were ashamed of the message they bear, it will have an excellent effect, and may give these pastors and their congregations’ favorable impressions of the truth. At any rate, it is right to give them a chance to be kind and favorable if they will.” Evangelism, 143. Please pray for Pastor Simliwa and the other gospel workers as they minister to people in their remote villages, where the gospel has never been heard. If you would like to support the gospel workers please mark your donations, “Togo Workers.”

Yours in the Master’s service for souls,