One of Jesus’ most famous promises is this precious assurance of answered prayer: “Ask, and it shall be given you; seek, and ye shall find; knock, and it shall be opened unto you.” Luke 11:9. Just prior to this special promise, Jesus gives the parable of the friend coming at midnight asking for loaves of bread. The midnight friend proved very persistent because of an important reason: He was asking for bread to give someone else. Through this parable, Jesus illustrates not only our need of persistence in prayer, but also the true spirit of prayer—asking to give. The Lord loves to answer our prayers and desires us to bring all of our burdens, joys, perplexities and challenges to Him. Still, it gives Him special delight to answer the prayers we offer in His spirit, asking to be able to give to others! How many around us are hungering for the bread of life—bread that we do not have, but do know how to obtain. Like the persistent friend, Jesus invites us to come to Him pleading for the bread of life to share with everyone we know. The promise is sure: “Those who beg at midnight for loaves to feed the hungry souls will be successful.” Christ Object Lessons, 148. Why? “The honor of His throne is staked for the fulfillment of His word unto us.” Ibid. Let us learn that it is not what we have, but what God longs to give that will feed the hungry world with the bread of life! 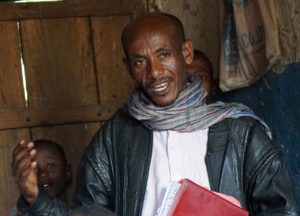 Brother Desta sharing the faith he once despised

I am still praising God for the blessings He gave us in Ethiopia last month and for how He is spreading His work in this part of the vineyard. Concurrent with the evangelistic meetings, we held a training program for the gospel workers in the locality. In the afternoons, many of the workers took us out to their churches to meet the believers and see how God is continuing to bless their labors. Meeting new workers who had recently found the Seventh-day Adventist message and new churches rejoicing in the truth were the experiences I enjoyed most. One new worker named Desta Boke shared his testimony of how the Lord has been leading in his life. As a minister for another church, he was working with an association for helping community orphans when one day he interacted with a Seventh-day Adventist who gave him a pamphlet. His first response was, “Why are you giving me this trash?” Yet in the evenings, when he studied his Bible, he picked up the tract and began comparing it with the Scriptures. As he studied, he concluded that this was the truth from the Bible. He began to attend Sabbath services by himself and became convicted that he must follow this truth regardless of the cost to himself. When all his former church officers and many members from southern Ethiopia gathered together, he shared with them the truth he had found and resigned his position. It was not easy for Desta. Not only was he now without a job, but his wife opposed the message as well. His former superiors offered him a larger salary and a larger operating budget if he would stay, but he knew he had found something more precious than gold! With his decision made, he began to share his faith with his former church members. Yet the challenges were not over, for his former church sued him, seeking a legal injunction against him sharing his new faith. At court, the Lord prevailed when the judge upheld Desta’s religious liberty to share his faith. Desta has persevered and now even his wife and children have joined him in happily living and sharing their new faith. Today, Desta is a church planter sharing the Three Angels’ Messages. Please pray for Desta and other gospel workers like him who are sharing the Adventist message in villages where this truth has never been heard. If you would like to support these faithful workers, you can mark your donation “Ethiopia Workers.”

One of the many new churches needing a simple church building

Yours in asking for and sharing the bread of life,