Joana D’ark Alves de Paiva lives in Bairro do Limão, a neighborhood of São Paulo, Brazil. For the last 35 years she has worked as a hair dresser. Although raised in a devout Catholic family, Joana didn’t want to follow her family’s steps. Instead she decided to attend an evangelical church, Assembleia de Deus. Still, she wasn’t really satisfied with this church. Somehow, she did not believe that God was really honored there.

One day, as she was listening to music on the radio, Joana came across a station airing a program called A Verdade Para o Tempo do Fim (The Truth for the Final Days) presented by Alexandre Bernardes. When she discovered that Alexandre hosts this program on the same music station every Sunday afternoon, she started tuning in regularly. For five years she had been listening to other religious programs, but she had felt sad at times because these programs preached things that were not according to the Bible. As she listened to A Verdade Para o Tempo do Fim, she realized that it was the one program she could trust, because the messages truly came from the Bible. Joana decided not to listen to the other programs anymore—only A Verdade Para o Tempo do Fim.

As she kept listening to the radio programs, Joana wanted to learn more. When she heard an advertisement for meetings Alexandre Bernardes was holding in an auditorium twice a month, Joana started attending. The first meeting she attended was about health, and she became very interested in the vegan diet. Since she liked the meeting about health so much, she also started attending another set of meetings called Encontros Com a Vida (Finding Life), another event organized by the ministry of A Verdade Para o Tempo do Fim. Meeting topics at Encontros Com a Vida included the signs of the final days, the second coming of Jesus, etc. 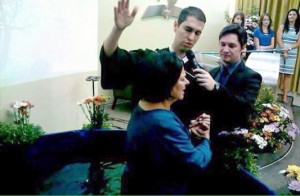 One day the meeting topic was “The Revelation and Its Everlasting Gospel,” a study presented by Dr. Collin Standish. Joana felt deeply touched by the Holy Spirit that day. Right there in that meeting, she made the decision to be part of the Seventh-day Adventist Church. When she got home that evening she decided not to open her hair salon on the Sabbath anymore, because she understood that this day is set aside for God and that her life belongs to the Lord. To help her clients understand her decision, Joana made a poster with the fourth commandment written on it to put up in her salon. Joana says that since the day she made the decision to keep the Sabbath, God has not forsaken her. Instead He has blessed her and multiplied her work, and she has been happy obeying His commandment. Most of Joana’s clients have respected her decision to keep God’s holy day. In fact, many of them have asked her questions, wanting to know more about the Sabbath!

In October 2015, Joana visited a Seventh-day Adventist Church and made the decision to be baptized. She testifies that the day of her baptism was the happiest day of her life. That’s not all: Joana’s decision for baptism has inspired others to follow her example. 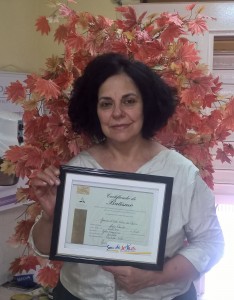 Joana with her baptismal certificate.

Joana has not kept the knowledge of truth to herself. She is so happy in her new walk with God that she has shared the message of truth with many people, especially her clients at the hair salon. Before opening her hair salon each day, Joana kneels down and prays for every person that will walk into her business that day. She asks God to save them as He has saved her.

Through Joana, a young lady named Ana Paula has received Bible studies and made the decision to be baptized into the Seventh-day Adventist Church. Ricardo, Ana Paula’s boyfriend, is also currently receiving Bible studies and plans to be baptized. Joana has another friend called Ivanni whom she invited to the lectures and programs put on by A Verdade Para o Tempo do Fim (The Truth for the Final Days). Now Ivanni, too, has been studying the Word and will be baptized very soon.

Joana shares about A Verdade Para o Tempo do Fim wherever she goes. She also shares literature with whomever she can. She wishes for many people to come to know the truth that she has found. She invites everyone she can to have the experience of adoring God on the Sabbath. To her it is something wonderful, something amazing to be in the presence of God.

Joana thanks God for A Verdade Para o Tempo do Fim, because through this ministry she found God’s message in His Word. Joana’s greatest desire is for this ministry to keep going so that many people will have their eyes opened and get untangled from Satan’s lies. She wants as many people as possible to know the saving truth.

We pray that many others like Joana who listen to the radio program will make the decision to follow Jesus and keep His commandments. Maranatha!

By Alexandre Bernardes of Ministerio a Verdade Para o Tempo do Fim, in Brazil. averdadeparaotempodofim@hotmail.com.