“God has given me a message for His people. They must awake, spread their tents, and enlarge their borders. My brethren and sisters, you have been bought with a price, and all that you have and are is to be used to the glory of God and for the good of your fellow men. Christ died on the cross to save the world from perishing in sin. He asks your co-operation in this work. You are to be His helping hand. With earnest, unwearying effort you are to seek to save the lost. Remember that it was your sins that made the cross necessary. When you accepted Christ as your Saviour you pledged yourself to unite with Him in bearing the cross. For life and for death you are bound up with Him, a part of the great plan of redemption.” Testimonies for the Church, vol. 7, 9.

Sueli Ramos de Souza is a 51-year-old, single resident of the city of São Paulo, Brazil. She was born in a Catholic home and always went to church. Her favorite saints were Santa Aparecida and Hedwig. Sueli also believed in mysticism, because the Catholic Church here mixes the worship of images and mystical objects. Even though her mother was also Catholic, she didn’t worship images like Sueli did. 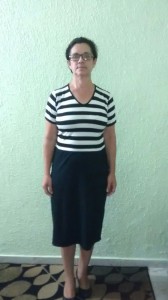 As an adult, Sueli decided to sell her shop and move to Portugal with a friend who was a spiritualist. One day, Sueli was passing in front of her friend’s house and she was invited in to meet another person. Sueli started talking to her and suddenly this person became possessed by a demon and began writing things on paper. This only made Sueli want to seek God because she understood that Satan could confuse her mind against truth.

She moved to Portugal and after a few months there, her cousin spent a few days at her house and asked her to attend an evangelical church with her. Sueli had a childhood friend who married a minister and she always invited her to go to church but Sueli always refused because she didn’t want to become an evangelical. But, when her cousin asked her to go to the church, she decided to attend her friend’s church. While there, Sueli was touched by God and decided, along with her mother, to become a part of that church: Assembly of God. They both began to study the Bible in Sunday School and they came to understand, through the Word of God, that it wasn’t right to worship images. That day, Sueli went home and destroyed all the pictures of saints that she had. After six months of studying the Bible in the Assembly of God church, both mother and daughter decided to become baptized.

One day, Sueli was listening to the radio from São Paulo and found a program called The Truth for the End of Time, presented by Alexandre Bernardes. This program airs every Sunday at 1:00 pm. She began listening to the studies and later became an assiduous listener of the program. She enjoyed the studies and compared them to the Scriptures, noting that they were in accordance with one another. She called the ministry and asked for the free study materials they were offering.

At this time, Sueli began attending Meeting for Life, a lecture series produced by our ministry. She was impressed with the fact that the studies conducted by The Truth for the End of Time radio program and their lectures contained profound studies about prophecies, something that she didn’t find in her own church. In fact, she realized that the Bible studies in her church were very superficial. Sueli questioned the pastor of her church to try to understand why they hadn’t ever preached about prophecy during the eleven years that she had attended their church.

The Truth for the End of Time ministry sent the requested materials to her and her evangelical family members living in São Paulo. Her cousin began discussing these studies with their own pastor who told him not to keep company with these people because he would end up becoming contaminated by this “sect.” Her cousin didn’t listen to what the minister said and continued listening to the CDs and watching the DVDs that Sueli sent him. He believed these studies are consistent with what is written in God’s Word.

Sueli wasn’t feeling good about attending her church anymore because they weren’t in accordance to the Word of God. However, she continued showing up because she desired in her heart to pass the true knowledge of the Bible to the brothers and sisters there. Sueli has also been talking to the church members and other friends about the radio program, hoping that through this instrument, they will gain the same knowledge of the truth that she has.

Sueli still had not accepted the Sabbath, however, as it was a difficult subject for her. A Seventh-day Adventist friend always talked to her about the Sabbath, but she opposed him saying that that law was abolished. Then she found a television channel called TV Novo Tempo (New Time TV) and began watching one of the shows that discussed the subject of the Sabbath. Sueli started following the study and came to understand that the Sabbath is indeed biblical and has not been abolished.

Today, Sueli and her mother keep the Sabbath. Sueli has been praying to God to give her wisdom and understanding to preach these truths to the members of her church. She has a strong desire on her heart to attend the Seventh-day Adventist Church. Sueli finishes her testimony calling for people to keep praying that The Truth for the End of Time ministry continues to preach the true gospel through radio because she believes that this program is preaching truth.

We believe that God has a great plan for Sueli’s life. In time, God will use her as an instrument in His hands to preach this message to others and save them from perdition. Let us pray for this project that was born in the heart of God and that many people will be reached for the truth of Jesus.

“Blessed, soul-saving Bible truths are published in our papers. There are many who can help in the work of selling our periodicals. The Lord calls upon all of us to seek to save perishing souls. Satan is at work to deceive the very elect, and now is our time to work with vigilance. Our books and papers are to be brought before the notice of the people; the gospel of present truth is to be given to our cities without delay. Shall we not arouse to our duties?” Christian Service, 152.

By Alexandre Bernardes, of Ministerio a Verdade para o Tempo do Fim, in Brazil. Alexandre7dia@hotmail.com.