John’s gospel begins with the familiar, sublime words: “In the beginning was the Word, and the Word was with God, and the Word was God…. All things were made by him; and without him was not anything made that was made.” John 1:1, 3. John describes Jesus as “the Word.” John returns to this description of Jesus as he sees Him returning with the armies of heaven, “and his name is called The Word of God.” Revelation 19:13. We can understand why Jesus is the Lamb of God, the Lion of the tribe of Judah, Immanuel and many other names, but why is He the “Word of God”? “By coming to dwell with us, Jesus was to reveal God both to men and to angels. He was the Word of God—God’s thought made audible.” “What speech is to thought, so is Christ to the invisible Father. He is the manifestation of the Father, and is called the Word of God. God sent His Son into the world, His divinity clothed with humanity, that man might bear the image of the invisible God. He made known in His words, His character, His power and majesty, the nature and attributes of God. Divinity flashed through humanity in softening, subduing light. He was the embodiment of the law of God, which is the transcript of His character.” Desire of Ages, 19, Bible Commentary, vol. 5, 1131. Through all eternity, Jesus dwelt in fellowship with the Father and thus He can convey to us in the clearest demonstration of the thoughts and character of the Eternal God. May we spend time gazing upon the Word of God that we may comprehend more and more the character and goodness of the loving God we serve!

Tamiru Gomele was an evangelist for a local Full Gospel Church in Ethiopia and was one of the leaders in the ecumenical movement in his area. Everything seemed to be going good for him until one of the gospel workers, Kebede Kenito, began to share the Seventh-day Adventist message with some of his church members. As the church members began to question whether the Seventh-day Adventist message was right or not, this brought Tamiru into many discussions regarding the Seventh-day Adventist message. Tamiru began to study these teachings closely for himself and the more he studied, the more he became convicted that this was the truth. Secretly he began to go visit Kebede in order to study the Bible with him. In time, he knew that he could not be a secret Nicodemus but must openly share the truths that he now believed. He began to study with his friends and then called the leaders of the church together giving them truth-filled materials and asking them to make a decision to follow the Bible and become Seventh-day Adventists. As he took this bold stand, the leaders of the church both those within the country and those outside of Ethiopia appealed to him to stay with the Full Gospel Church, that it did not matter what church you went to and many other things. They offered to increase his salary if he would only forget about the Sabbath and other kindred truths. When offers for honor and money did not dissuade him from following his new found truth, they accused him before the magistrates. Then they told the villagers that he was teaching heresy and that they should shun him by not speaking to him or 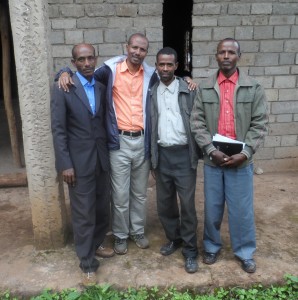 Tamiru (right) with other gospel workers

having any dealings with him. Still, Tamiru kept pressing forward. He has opened up his small hut in the village for those who want to worship God on His holy day to come and worship with him as he continues to share with them the full Three Angels’ Message. Please continue to pray for Tamiru and the many others who have accepted the message through his courageous stand and teaching. We would like to be able to help build a church in the village so that the many who are accepting the message will have place to worship. If you would like to help Tamiru and the new believers, you can mark your donation “Ethiopia Churches.” If you would like to help support faithful gospel workers continue to share the truth throughout the villages, you can mark your donation, “Ethiopia Workers.”

Yours in looking to Jesus and sharing Him with others,