I had been home for months before the directive came to me. My children were asleep; the house was quiet. I had been reading from the book of Isaiah. The words in chapter six, verse eight, kept going around in my head. “I heard the voice of the Lord, saying, whom shall I send, and who will go for us? Then said I, Here am I, send me.” I knelt by my bed feeling bewildered. Normally after spending time with God a sense of quietude settled over me, but not this time. Even as I prayed I felt troubled. After some time I urgently pled with God. “I feel as though You are trying to tell me something. If there is something You want me to do, please tell me.” Instantly I heard a voice speak loudly in my mind. “Build a school for Devi.” Immediately following that command I heard these words: “And thine ears shall hear a word behind thee, saying, This is the way, walk ye in it, when ye turn to the right hand, and when ye turn to the left.” Isaiah 30:21.

It was 1997. I had traveled to Nepal to research the logistics for a future health camp. A Seventh-day Adventist missionary family was living in the Himalayan Mountains in a region so remote it was accessible only by foot, and furthermore, medical care was miles away. They had been praying for a volunteer medical team to visit and I was there to see how feasible that would be. 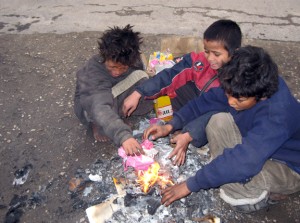 After landing in Kathmandu, I was immediately surrounded by dozens of dirty, smelly, ragged children as I stepped from the Tribhuvan Airport into the night. A dim street lamp did little to illuminate the mob before me. The children, street children, were shouting and grabbing for me. It was late, I was tired, and there were no taxis! Never had I been in such a predicament. There was a band or strike in Kathmandu, so motorized vehicles weren’t allowed on the streets. A rickshaw took me to a hotel. That was my first experience with street children and it was disconcerting.

Nepal was certainly an adventure! I rode a dilapidated bus, crammed to bursting with local people, animals, and wares. The roof was piled high with boys, bulky sacks, and bamboo cages brimming with clucking chickens. Many young men were wedged between cargo or hanging off the sides. I sat in the last row with a drunken man on the floor at my feet. A woman was squeezed in the middle of the standing pack. She handed her baby for me hold during the long ride. The bus leaned alarmingly around every bend. I felt lightheaded from the strong odors, stagnant air, and swaying.

During my six-hour trek into the mountains on a sometimes precarious, narrow trail, a mule train with tinkling bells trudged past, laden with burlap bags of salt. Lean men with exposed bony legs hauled heavy burdens. They were porters, hired to carry anything and everything that people wanted into these famous mountains. An older man passed with a woven chair strapped to his back. That, in and of itself, was a spectacle, but the chair had an occupant: a sick woman who was being toted many miles to a clinic. A man smaller than me was lugging an armoire up the steep incline! Yes, Nepal was definitely interesting, but God didn’t send me half way around the world as a tourist. He was about to show me something that would change my life. 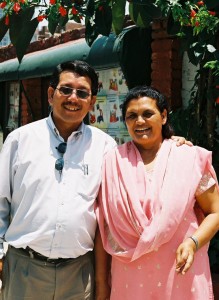 At that time Nepal had no religious freedom. It was the only Hindu nation in the world. Christianity was strictly forbidden, punishable by prison or death. The missionaries told me about an underground Seventh-day Adventist church outside of Kathmandu so I decided to attend. Pastor Tamsang and his wife Devi explained how they had opened a school for unwanted children. Devi eagerly took me down a dirt track to a small three-sided building with a corrugated metal roof, dirt floor, and woven bamboo doors. I didn’t know what to say because the building looked like a cow shed. Devi was so enthusiastic about the school and the half dozen homeless children living with her. I had never witnessed such benevolence or Christian dedication.

I journeyed home, my mind expanded with all that I had seen and heard. I was saturated in culture shock, yet, sadly to say, the thought of building a school for Devi didn’t enter my mind. I have three children of my own who are dearly loved by me and by God. Are the homeless, impoverished children in Nepal less valuable or less loved by God? Of course not! He died for them just like He died for me and my family. We are equally cherished by Him. Then why is it so easy to dismiss the needs of someone else as if they don’t exist? Why is it that Jesus said to “love your neighbor” and yet I went home and became absorbed in my own life, giving little thought as to how those children would get their next meal or how they would stay warm at night.

God had to shake me awake and shout in my ear in order for me to see His vision of a plan to not only house and educate His children, but to teach them of His love. When God told me, “Build a school for Devi” I couldn’t be certain I had heard correctly. I was a stay-at-home mother homeschooling my children—a very ordinary person who had never done anything “big.” Eventually I told others of building a school in Nepal and no one thought it was possible. I waivered because I knew nothing about fundraising and I knew all too well that it was an insurmountable task.

I believe that God sometimes takes the most unlikely people to do something important. God’s direction, power, and plans unfolded before me. His mercy and love shone forth during the entire process of fundraising, purchasing land, drawing blueprints, laying cinderblock, and government red tape. The money ran out many times. It appeared that the project would fail. Countless times the mission seemed unattainable which led Devi and me to more prayer, more fasting, and ultimately more faith. That God was orchestrating the project from beginning to end was absolutely clear because I had no background or experience to dim His glory. 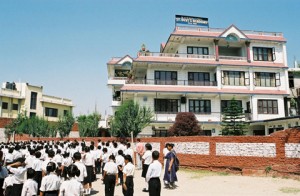 As the project progressed I received an urgent message from Devi. An orphaned eight-year-old girl named Sabina was about to be sold into prostitution! Devi didn’t know what to do. She had no money to support the girl but she obviously couldn’t allow that precious child to be sold. I answered, “Take in Sabina and any endangered children. God will send sponsors.”

My heart broke as I met the children filling up the beds in our home. How could a person sell a sweet, innocent girl into prostitution or a lovely small boy as a slave? Why is a culture so perverse that a step-parent tosses the step-child out of the home like a piece of garbage? Why is a person considered to be “untouchable” and worthless because they are born with a certain last name and therefore are not treated like respectable human beings? How is a situation so abominable that a mother leaves her newborn infant in weeds bordering the road where ants will eat it? God kept sending us children from dire and diverse situations. Our door was open to them all because Jesus said, “Let the little children come.” Sometimes on my flight home from Nepal, I would turn my face to the window because tears washed down my cheeks. How could God allow me to be involved in rescuing His children? The honor feels too great. Saying “yes” to God is scary, but it is awesome, and truly a privilege!

From this project a ministry was formed. What started with six homeless children has grown to 125 who call St. Devi’s home. Our school has enrolled 400 students. Many graduates have earned degrees, but more importantly, most of our students have given their hearts to the Lord. God continues to direct as our ministry grows.