John Day is a small town about five hours from Portland, Oregon, and three or four from Boise, Idaho. It is a rural area with a few churches, most of which are struggling. One of these is a small independent Seventh-day Adventist church that meets at the Mt. Vernon grange. The church I was working for in Portland wanted to help them and so they sent me here for that purpose.

When I got to John Day, I began going door to door and found a couple of people interested in studying the Scriptures with me. Then, on the second day, I met the pastor of the local Presbyterian church, and he is interested in hosting a prophecy seminar for his church. A couple of days later I had my first scheduled Bible study with an at-home mom named Brenda.* Her kids were excited to have a visitor. A woman from our church, whom I asked to accompany me, seemed to have a good time with the children while the study was going on. Brenda is now out of town for several weeks, however, but she has already said that she would continue studies upon her return. 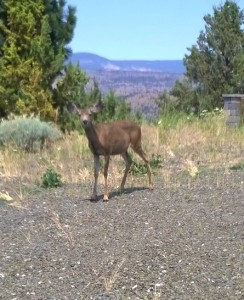 A deer greeting the author on one of his daily journeys.

At the beginning of my first weekend here, the church had a booth at a local health fair where hundreds of people were able to receive literature! And even though the focus of the event was health, the Lord graced me with the opportunity to share the gospel. One woman walked right up to me at the booth and said, “I won’t take a book, but you can give me your spiel.” I was so delighted to share the gospel that her request overwhelmed me. We began talking and it turns out that she goes to a church that’s pretty liberal, so she’s never been confronted with the law before. She thought she would go to heaven because she was a “good person.” The Lord used me to point her to the law, asking her questions that exposed the sin in her life. Then when she realized how full of sin her life truly is, I was able to point her to her Redeemer, and she was able to understand the true meaning of Calvary. She didn’t right then and there repent and turn to Jesus, but she did tell me she would consider what we had talked about, and even took a copy of Bible Readings for the Home. Please keep this woman in your prayers. She lives out of town, but God’s grace may touch her, as she was actually open to the message.

There were two other people who asked some questions and were able to hear the gospel, but unfortunately, they weren’t open and mocked the preaching of the cross. This is fine because they’ve had a chance to hear the gospel so I pray that they will be saved someday, but if not, then they cannot say that they have not heard.

The following week, the Lord sent me all over the community and granted a few Bible studies. There was one study with a woman who lives right across the street from one of our church members, and although the two don’t seem to know each other very well, they are friendly. Melanie* had told me that she is a Roman Catholic who hadn’t ever really studied. She had lots of questions, so I asked if she would like to have a Bible study. When she asked if that would save her, I had to be honest, so I told her that studying with me, in and of itself, wouldn’t save her, the only One who can do that is Jesus Christ. I went on to explain a little bit about salvation as a free gift. She was touched and very excited to start studies and the next day, when we began studying, she was very excited to learn! Tomorrow, she and I are having our fourth study and she is really coming along! Melanie asks lots of great questions and is quickly learning from the Scriptures. Please keep her in prayer. 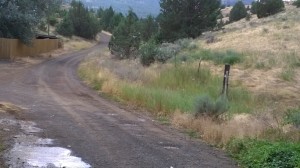 One of the rattlesnake roads.

There are a lot of roads here that I begin to travel down, hoping to find someone with whom I can share the gospel, only to find that the road doesn’t lead anywhere and the only creatures I can witness to are the rattlesnakes, of which live in abundance in this area. I don’t always see them but I hear their rattles in the dry grass, sometimes more than one at a time. I told my best friend about this and she says that it is very kind of this community to build snake highways, but we agreed that the reptiles probably aren’t interested in the gospel message. These roads have turned out to be a blessing, though, because I am able to have some time to just walk and pray while working.

One day, while traveling down what looked like it was going to be just one of those rattlesnake roads, I came up to a house on the end of a hill. A woman named Polly* lives there and she has problems with her ankles. Polly enjoyed watching a televangelist and asked me to watch one of his videos. We had a long conversation about some of the things he teaches that sounded unbiblical and she said that she was sure she was misrepresenting him. I decided to watch the video while I was eating dinner that afternoon but it was so full of error I could only watch half of it! The preaching was almost out-and-out attacking the Bible. I was concerned and talked to Polly, but she didn’t want to start Bible studies unless her friend (who also watches this program) could attend, too. She later decided she didn’t really want to study, but is always happy to have a visitor, so I’ve been going back from time to time. Today, I left her a The Desire of Ages, which she says she’ll read. I’m praying that the Lord will convict her to start studies. Please pray for Polly. 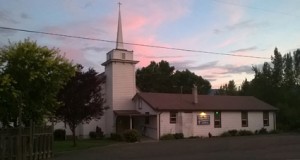 A couple of weeks ago I met with the Presbyterian church about doing a seminar, which their pastor really wants to make happen! When I went up front and talked to the church they all seemed to be interested, too. But it was July 5th and most of their board members had family over so they didn’t want to stay to schedule anything. I am praying that God will move upon their hearts. They’re having me return next month to talk to them again. May God spread His message to every nation, kindred, tongue, and people!

There are many other things which are worth mentioning, but the other highlight I will mention is a study that the Lord scheduled for me with a gentleman close to the home where I’m staying right now. When I arrived at his home, his roommate came out and wanted to join us, which I of course encouraged him to do! They were both so interested that they said they’re going to talk to their friends about joining us, too. Please praying for Doug* and Roger.*

Most of all please pray for me and my ministry, I have a very high calling to meet and I need more of Him daily!