A Light  Shines in Melbourne

In a previous edition of this magazine, I shared with you the story of first nights of my meeting series in Melbourne and how God gave me courage to press on even though no visitors turned up the first night in either meeting location. I thought you may be encouraged to hear that this was not the end of the story.

Upon seeing that no visitors had turned up, and knowing that I still had four nights left in each location, I decided to get a good number of invitation flyers printed. A few friends helped me pass them out. Here in Australia it is legal to letterbox (place flyers in mailboxes), so we spent hours running or walking through the nearby districts of the two meeting venues. One of my friends ended up suffering from bad blisters, but we prayed that the extra efforts would bring fruit. 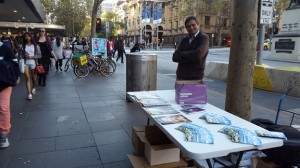 The authors coworker Michael during a literature campaign in Melbourne.

Because of the bad parking facilities in the area, I packed food samples and equipment in my big suitcase and dragged it with me on the train to the second night of the program. Two young people turned up, independent of each other, for the second night of the program in East Melbourne: a man about 25 years old and a lady about 30. They were both locals who had found flyers in their mailboxes, which was a great encouragement! They were very interested in health and had only received the invitation to the health meetings. We had a very good time together and they really enjoyed my health presentation. Afterward, I told them about my religious meetings that followed the health talk every night. The young man had something else planned that night, so I suggested that we could start the religious meetings the following week. The next week they both came back and stayed for both meetings. Another local also came along for the health talk. The young lady came every night and the young man only missed one. A couple of others also turned up one night—one of them was a woman my mother had met on the street during our Melbourne campaign in 2014. I had called her up and invited her to come. She did not know exactly what to expect, but after hearing the health talk she praised the Lord openly before the rest of the group. She had two children who struggled with their health and had asked God for direction. Now she could take all this good new health information back home to share with them. 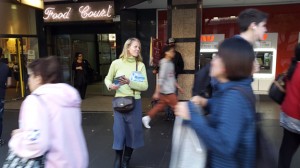 Stine passing out books in Melbourne.

People also started to come to the Lilydale meetings. One of my Bible contacts even helped me pass out invitation flyers. She and her husband volunteered to cook vegan food for the first two nights. This lady has had a problem with accepting the Sabbath partly because of her husband’s wishes, and I was happy that they both came for the talk I gave on the change of the Ten Commandments and the Sabbath. Another of my health contacts also turned up one night and another night two ladies from the community found their way to one of the health meetings after seeing the flyer in a local restaurant. Even a young local teenager girl came one of the nights, and a Seventh-day Adventist couple from the area brought their worker, who is a Mormon. He seemed to soak in information and gladly receive The Great Controversy. 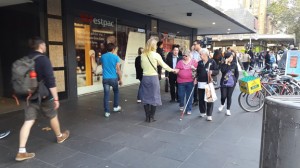 Stine passing out Steps to Christ.

Altogether, about 11 non-Seventh-day Adventists visited one or more meetings, and I got most, if not all, of their email addresses. I have especially endeavoured to keep in touch with the two young ones from East Melbourne. One day we met up for a meal together in a vegan restaurant in Melbourne, and just a few days ago the young man brought a friend and visited our “Open House Day” here at Highwood Health Retreat.

“They should feel a love for souls, a burden of labor for them, and should make it a study how to bring them into the truth. They can distribute our publications, hold meetings in their homes, become acquainted with their neighbors, and invite them to come to these meetings. Thus they can let their light shine in good works.” Christian Service, 178.

I am so glad that God gave me courage to follow through with the campaign until the end! I also want to add that God is blessing the work here in so many other ways. The meetings in Melbourne were a part of the follow-up work after the Melbourne literature campaign we had in March 2014. As a result of this campaign a good number of people requested Spirit of Prophecy books. Beside myself, Highwood has two other Bible workers, and we have now visited many of the people that have received the books. Some are already studying the Bible with us on a regular basis and it is amazing to see how God is at work! If you want to follow the progress of this part of the Lord’s vineyard, please request my email “insider” newsletters. You are also welcome to follow us at Highwood on a more public level by visiting our web page and/or the Facebook page I run for Highwood (you do not need to be on Facebook yourself in order to visit our page).