“Those who are impressed to enter the work, whether in the home field or in the regions beyond, are to go forward in the name of the Lord. If they depend on God for grace and strength, they will succeed. At the beginning their work may be small, but if they follow the Lord’s plans, it will enlarge. God lives. He will work for the unselfish, self-sacrificing laborer, whoever and wherever he may be.” The Southern Watchman, April 9, 1903.

“The humblest workers, in co-operation with Christ, may touch chords whose vibration shall ring to the ends of the earth, and make melody throughout eternal ages.” The Ministry of Healing, 159.

On a Friday afternoon, earlier this year, we were preparing food for the Sabbath. My wife asked me where we would be going to worship the next day. I said we would go to Lamtabong Church. So at 4:00 am, my wife, our 18-month-old son, and I left home on the motorcycle to go to church. While we were on the road, I told my wife that I remembered something. Once, when we were visiting Brother Tonio’s nephew, he told me about another village near them. They had a church with no name, but they kept the Sabbath. I suggested to my wife that we go there instead and she said, “It’s up to you.” So I decided to find the church with no name. I was very curious about this group and also excited to meet them.

Tonio’s nephew told me that this group does not belong to a large church organization. They have six churches, five of which are in Tupi, South Cotabato. The one we were trying to find was in Lamno, near Lamtabong. When we reached the Municipality of Banga at 7:00 am, we still had an hour to go to reach the village of Lamno. I had never been there before, so we got lost three times. We finally reached their barangay (suburb or village) and asked an old woman if she knew where people worshiped on Saturday. She told us the way. When we arrived I asked a woman, who sat near the water washing clothes, if there was a church of Sabadista (Sabbath keepers) nearby. She pointed the way. When I saw the church I was happy and forgot my tiredness.

The people were very happy to have visitors and shook our hands. When the church service started, my wife and I were startled because of the way they worship. The members dance and clap their hands while singing. After singing this way, they had a solemn hymn and prayed. All the boys raise their hands during prayer. Then the pastor gave a sermon and I understood that they don’t eat unclean foods, as is written in Leviticus. Finally, at 1:00 pm, the service was done. The people asked us where we came from and about our religion and I told them. They said that most of their members had come out of the Alliance Church and I then understood why they danced, because they brought their old ways of worship with them. Their minister, Pastor Dolphy, told me that they worship on Sabbath because their head pastor had a dream. When they read the Bible, they saw that Saturday was the true day of worship. After lunch, we decided to go home. While we rode the motorcycle, I told my wife that we would go back the next Sabbath and give the message. 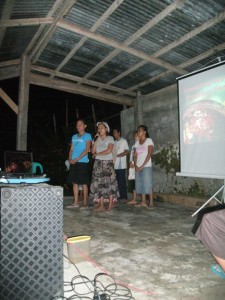 The next Sabbath, we went back to the village of Lamno and they asked me to give the sermon. I thought they might not accept the message I presented to them from the Bible, but to my surprise, Pastor Dolphy told the people that they would make the changes that I had presented to them.

We eventually held a crusade in Barangay Lam Apos, which is near Lamno. Pastor Dolphy told us that they are willing to help do the Lord’s work. The barangay officials gave us permission to hold the crusade. On the first night, lots of people attended. The members of Lamno Church were very supportive and helped carry the things needed for the crusade. When we finished our preaching the first night, Pastor Dolphy told me that it was the first time they heard that message and were excited for the next night. During the day, we conducted house-to-house Bible studies and invited people to the crusade. We became close to the Lamno Church members and they shared their testimonies with us. 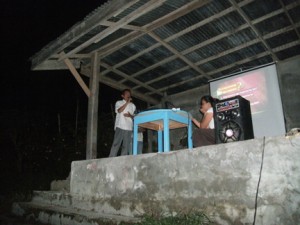 The author and his wife presenting the evangelistic message.

As I talked to Pastor Dolphy, I asked him more about the background of their dancing and clapping. He told me it had been their practice before, when they were part of the Alliance Church, and that it was in Psalms 149:3. I explained that the people were rejoicing after a battle, in times of war. I told him about Ephesians 6:12, and how we wrestle not against flesh and blood, but against principalities and powers. Pastor Dolphy already understood, that during the time of the apostles, they worshipped God without dancing and clapping, but that God wanted us to worship him with “Speaking to yourselves in psalms and hymns and spiritual songs, singing and making melody in your heart to the Lord.” Ephesians 5:19. He told me that the members would have to be taught slowly because it was hard to get them to change a practice they have done for many years, but he as the leader should apply it first, so they would follow. By God’s grace, Pastor Dolphy didn’t dance or clap anymore.

The topic on the last night of the crusade was the mark of the beast. The local protestant Sunday-keeping pastors attended and were very happy to hear that the title Vicarious Filii Dei is 666 and they clapped their hands in support. But, as I continued, I told them that the number was different than the mark and explained that the mark was Sunday. The pastor got angry and said it was just our own Bible that said that, and it is not true. But the captain of the barangay, even though he is Roman Catholic, told the people not to argue but to read it for themselves.

Afterward, the Lamno Church members we were staying with told us they were very happy to hear the message, for they had never heard it before. And because of this crusade we have received many requests to preach in other places.

The day following the final meeting, one of the Lamno Church members, named Brother Tormeo, told me that he had a dream the night before. He dreamed that people would beat us. He told me to take care when we went to the barangay proper. After breakfast we went to the barangay treasurer’s house, where we had left our things from the crusade, and we were frightened because we saw the barangay captain. When we went near the house, we prayed that he would not have a prejudice against us because of what he heard the night before. I said good morning to him and he nodded his head. I asked him how much we owed for the use of the meeting place. He said we owed nothing, but instead of paying we could use the money for our gasoline in ministering to other places, and I was thankful to God.

“True success in any line of work is not the result of chance or accident or destiny. It is the out working of Gods providences, the reward of faith and discretion, of virtue and perseverance. Fine mental qualities and a high moral tone are not the result of accident. God gives opportunities; success depends upon the use made of them.” Prophets and Kings, 486.

By Temtem Piedraverde. Support for the work in the Philippines may be sent to Mission Projects International, PO Box 59656, Renton, WA 98058.