“The love of God is greater far than tongue or pen can ever tell.” Frederick Martin Lehman.

I have more than enough reasons to praise Him now, as He is helping several missionary projects. In the last month He accomplished what we cannot do. Here are a few new experiences God had the pleasure to offer us. 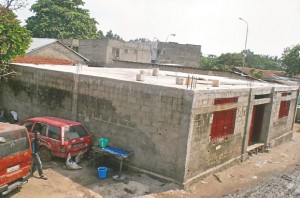 Completing the first floor of the new building.

The new building for a church congregation in Kinshasa, Democratic Republic of the Congo (DRC), is a project that was first discussed during a special evangelism effort several years ago. From the very beginning we had true friends who helped us mightily. The property was purchased with family funds as well as a donation by a good friend from Washington State, USA. Pastor Cody Francis and his friends, as well as Steps to Life, also helped greatly. The construction progressed slowly, but surely. The work has not been without setbacks. One night, thieves came and cut iron bars and so the site was guarded from then on. But recently we rejoiced to see the construction of the first floor completed.

In another event that showed God’s workings, I was called to help a poor family of three living in Bucharest, Romania. The mother of the family is 85 and almost blind. Her husband died in 2003. One son is unemployed due to a medical condition and the second son is the only one able to work. His wife died four years ago and, not having any money for the funeral, he took out a bank loan for €900 (Euros)—a big sum for Romania—and he is still paying the debt. A few of the young people of the Romanian church were able to donate about €170 but the family’s debt was €6,000. Three people who were unrelated and of different faiths decided to help. Together we divided the sum and paid the executor. The family was saved and they will not lose their home to the executor. 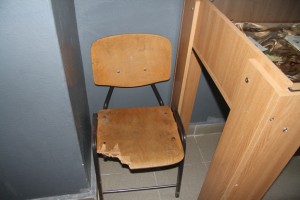 One of the old and broken chairs.

On my way back to Austria, I decided to pay a short visit to a village where, in the past, we helped a school improve conditions for the students. The name of the village is Silistea Gumesti. My father, older brother, and I worked there for a wealthy Seventh-day Adventist many years ago. During World War II, this Adventist had an incident in his dairy. One day, police came and took all the employees on a long march to the district capital. It took about three weeks. They had been falsely accused of proselytizing. The accuser was the orthodox priest, himself a drunkard and guilty of immoral conduct. On the way to judgment, the prisoners were badly treated by the onlookers who believed they were criminals. They were eventually released because the owner of the dairy offered one-third of his cheese to the Romanian Army, then at war with the Soviet Union. Now we have an Adventist church and school in that village. The principal had approached me for help because the school benches delivered by the government were of very poor quality, and we were able to help them.

On the long roads through the villages I tried to adjust to the lowered speed of 35 miles per hour (mph), but I was traveling alone and began to daydream about my next destination. The next thing I knew I was being stopped by a policeman who said the radar showed I was going 72 kilometers per hour (about 45 mph). I agreed and prepared to pay the fee, about $80 US. While the officer wrote the ticket I was inspired to talk to him about the reason for my trip. The young policeman heard my report about the missionary projects and continued to write his report. When he finished, I handed him the money for the fine, but he said, “This is only a warning. You don’t have to pay anything.” I was surprised and we exchanged email addresses. I have recently finished a letter to him.

The next stop was a village in Serbia, the birthplace of a renowned biochemist who discovered remedies for ailments, even for cancer. Dr. Mirko Beljanski worked at the Pasteur Institute in Paris for 28 years and then in a laboratory for the French army for 10 years. One morning, 50 police officers came into his lab on the orders of a judge and confiscated and destroyed everything. France was condemned by the European Union for this action, but the deed was done. Dr. Beljanski developed leukemia after that but didn’t have his own products to heal himself. He died in 1998. His widow lives in New York and continues her husband’s work. I had the pleasure of giving her a report of my visit to his birth town and the church where they were married in 1951. 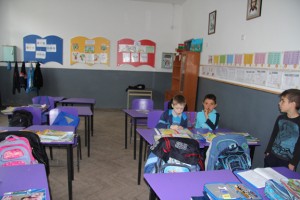 New tables and chairs for the school.

Before passing the Romanian border, I wanted to sleep somewhere, so I asked the people of a small town if there was a Seventh-day Adventist church in town. They man I asked didn’t understand my question, so I changed my wording and asked if he knew of any Sabbatarians in town. He said, “Oh, yes, there is a Sabbatarian church here and the chief is Dr. Fara. Please go to the hospital and take his phone number.” Arriving at the hospital, I met Dr. Fara and his wife. They are faithful Adventists and have a good name in the town. The next day, a man showed me a wonderful location for a future sanitarium. He said he was encouraged by my visit. Their church members don’t meet in church on Sabbath afternoons, but instead assemble at the hospital, where Dr. Fara is the manager. They invite patients to attend their service in one of the rooms there, and they do.

The final experience happened back in June. A Romanian doctor is experimenting with balms from plant extracts and wanted me to organize a little conference in our village. We didn’t have much time for advertising, but I visited four villages and distributed invitations. I prayed for a miracle because people were very busy on that Father’s day weekend, but I believed God would honor His name and He did. We had several conversations with people who needed medical help.

Yes, the love of God is far greater than we can imagine. He gave His only Son to die for us. We are called to be His coworkers but we cannot ever repay His love.