The Last Message of  WARNING

Hurry up, we’re late!” shouted my son Caleb, as my husband drove the pickup out of the yard, pulling our utility trailer loaded with the large canvas signs. Two other youth scrambled to hop on the back of the trailer as it pulled out of the driveway. My daughter and I waved from the front porch and I breathed a prayer that God’s angels would accompany them and protect from danger. 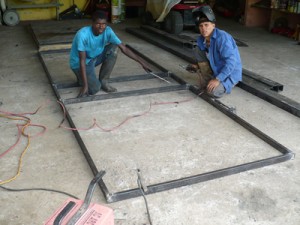 Barac right and a helper building framework for the signs.

Our ministry here in the coastal hills of Ecuador has started a number of new projects this year. One of them is the erection of billboard signs along major highways and roads, displaying present truth messages. The focus of these messages are the two great errors that The Great Controversy says will bring the world under the spell of Satan’s deceptions and cause the threefold union between the papacy, spiritualism, and apostate Protestantism.

Pope Francis was about to visit Ecuador and so we stepped up operations and worked on erecting 13 billboards. They will cover the major highways, especially at the entrances of the major cities of our Province of Manabí. 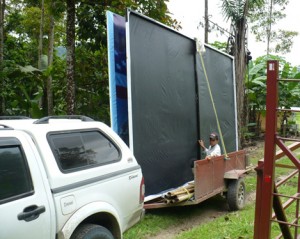 In the past month, my husband Barac has been laying the groundwork for this project, which includes finding the ideal spot for each sign and making contracts with landowners. Of course the property owner wants to know what the sign says and what church or organization is behind it. Honesty is the only way to go, but it does make for interesting reactions. As they read over the flyer that shows the examples of the different signs, the majority run the other way, crossing themselves as they go and muttering things under their breath. But these last few weeks, Barac has had the privilege of meeting a number of landowners that are excited about helping in this project. Most of them are older people that are upset with the way that their churches have changed—the dancing, music, and riotous young people—but don’t know what to do about it.

At one place, a wrinkled old man clambered down the ladder from his house as Barac drove up and parked. He smiled a toothless grin and stuck out his leathery hand in greeting. As they talked, the old man’s wife joined the conversation upon hearing her husband say a number of times, “Yes, praise the Lord, this is the truth!” As the conversation advanced, the old man held up his hand and said, “Brother, I’m going to tell you something that I just learned from God’s Word that will knock your socks off! Did you know that the pope, who everyone calls Holy Father, is really the beast of Revelation, the antichrist that is trying to deceive the whole world? He is coming here to our country to give us the mark of the beast.”

Barac swallowed and sent a prayer heavenward for help. To make a long story short, they had a Bible study right there and the old man now understands the mark of the beast and accepts the Sabbath as the day that God sanctified. He was so enthusiastic that he asked us to put 10 signs up all over his property, and he didn’t want us to pay him anything for the rental. Barac told him that one sign would be enough, and that we have to make a contract, but the landowner could now help by passing out tracts and Bible studies to interested passersby. That was just one of the wonderful experiences that he had with quite a few landowners here in the province of Manabí. 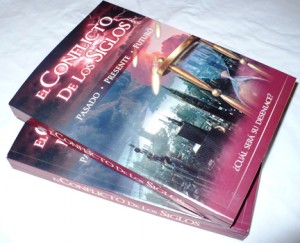 The Great Controversy in Spanish

Let me share a little of our next project. We have numerous quotes where inspiration tells us that “publications must be multiplied, and scattered like the leaves of autumn.” Colporteur Ministry, 5. Over the years, our ministry has been working on a small scale, making tracts, pamphlets, or reproducing small books and distributing them all over the country. On our last family trip we distributed The Great Controversy to all the government and law offices in the major cities. After the reception that we had from those who received the books, we have been praying that the Lord would provide more of these books for a larger distribution here in Ecuador. Why did we choose The Great Controversy? The book, Colporteur Ministry gives the answer:  “The Great Controversy should be very widely circulated. It contains the story of the past, the present, and the future. In its outline of the closing scenes of this earth’s history, it bears a powerful testimony in behalf of the truth. I am more anxious to see a wide circulation for this book than for any others I have written; for in The Great Controversy, the last message of warning to the world is given more distinctly than in any of my other books.” Colporteur Ministry, 129.

In another recent experience, a woman called to ask if our ministry was giving out The Great Controversy. Her name is Stephanie and she has been an Adventist for a few years but was very discouraged with the condition of her church and the apostasy of the brethren. She didn’t have anyone with whom to study present truth. One day, as she was giving out tracts in her neighborhood, she felt encouraged to stop at a house and began a conversation with the woman who lived there. She found out that this woman was very caught up in New Age teachings and had been cleaning her house and getting rid of things that could be bringing her all the misfortune that she had been experiencing lately. She had a box of books on the front porch and right near the top, in beautiful condition, was a brightly colored paperback: The Great Controversy. Stephanie snatched it up and asked if she could have it. The woman shrugged and said that she would be happy to get rid of it because ever since someone had given it to her a year ago at the central park in the capital city of Quito, she had been plagued by it. After starting to read it, she felt terribly uncomfortable and her “inner voice” kept telling her to get rid of the book, and so she did.

As soon as Stephanie arrived at home, she began reading the book and could hardly put it down. After a couple weeks she happened to open the cover one day and on the second page she noticed a stamped name that she hadn’t noticed before. It was our ministry stamp with a phone number. Trembling with anticipation, she dialed the phone number, wondering who would answer. That is how we became acquainted with Stephanie and her family. Her husband is an elder at a Seventh-day Adventist church in Guayaquil. After we recently visited with them to share messages on health and country living, they are starting prayer meetings in their own home with neighbors and fellow Adventists. They also are making plans to move their children out of the city as soon as they can. Praise the Lord!

As I finish this letter, I want to earnestly make an appeal to each reader. Time is so short and here in Ecuador there is an extreme need for more The Great Controversy books. After counting the costs, we realized that it is a lot more economical to have the book printed here instead of trying to import it from the United States. We have a printer friend that is giving us the best price on the market. The more we print the better the price. The cover is very colorful and eye catching. We just had 2000 printed and have already distributed more than half. We have had to turn brethren away who want these books for their churches, because there just aren’t enough. Our goal is to raise enough funds to print 10,000 books, at the price of $1 US each. Please consider sponsoring 100 books for Ecuador, or 1000 would be even better!  Maranatha!

By Laurie Orellana of Pra del Tor Ministry. orellanafamily@gmail. Support for this work may be sent through Mission Projects International,