“Thy shoes shall be iron and brass; and as thy days, so shall thy strength be.” Deuteronomy 33:25.

This is a most precious and glorious promise from God that I have claimed as the days pass, here in Senegal. With so many changes going on in the world and the difficulties of our neighboring African countries, there are times when we are tempted to be afraid but we must remember that the promises of God are sure and that He has us in hand. These promises have sustained me here before, during, and after the Ebola scare.

It is one thing to hear about Ebola in other places but when it crosses the border, that is when the rubber meets the road! What will we do if Ebola comes our way? Death becomes something close and perhaps inevitable. But God has shown me that He is closer and His grace and mercy are like Him: ever-present. Difficulties will come but our loving and kind Heavenly Father will give us shoes and enough strength to go through them all.

When the news arrived that a young man infected with Ebola had come into Senegal, fear and panic gripped the population. People were enraged that he would sneak into the country knowing that he was sick and also because he did not tell his extended family whom he was visiting that he was sick. It is truly in a crisis that character is revealed. Calls came from several quarters to kill him, and neighbors wanted to burn down the house where he lived. People became suspicious of foreigners and the tension was palpable. Hand sanitizer bottles were put at the entrances of public places and people stopped greeting each other with the traditional handshakes and kisses. At church, the normal greeting after the service was suspended and remains so until now. Even communion was suspended.

Relations between Guinea and Senegal became strained and the Senegalese government closed its borders with Guinea. Fortunately, the young man recovered and no one else became sick. Senegal returned the young man to Guinea and everyone relaxed somewhat. Still the danger is not past. Mali has had a few Ebola cases linked to a Guinean marabout (religious leader) who died in October. Since then Mali has refused to close its borders with Guinea and, to date, Senegal has not closed its borders with Mali. Mali is land-locked and relies on the ports of Senegal, Guinea, and Ivory Coast for a lot of its imported goods. Also closing the border would be a violation of an important Malian principle of diatiguiya (JAH-tih-GEE), which is the belief that hospitality to friends and even strangers is obligatory. 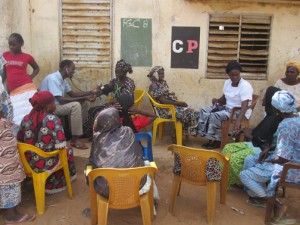 On the brighter side however, this gave us an opening to talk to people, both in and out of the church, about God and faith, the last days, and the health message. Crisis reveals character but it also opens a field for labor. People are looking for answers and we have answers for them. I did presentations at church on many different topics including how to improve the immune system, the dangers of fear, the blessings of faith and trust in God, the necessity of honesty, and the importance of sanitation and hygiene for the prevention of disease. Many people have lost their lives because other people were not honest about their exposure to the disease.

In the village, we recently held health presentations that were very well received. Jean Sambou, the young nurse who helped me when I had dysentery came for another visit and did the presentations in Wolof. We also did blood pressure screenings one Sunday morning. During the screenings, we found several cases of hypertension in women. I will do another presentation just for the village women on managing stress in January. Jean got sick with typhoid fever right before he left to go back to Casamance but has since recovered, praise God.

Otherwise, life continues in Senegal. I have been spending a lot of time in Dakar recently because of employment obligations and there is a rich field of labor here. When I am in Dakar, I stay with my oldest daughter and her family. The health message has been a blessing to the downstairs neighbors who have had a few health challenges, as well as the night guard of the apartment building next door.

I always keep charcoal on hand because over the years I have found that inevitably someone will need it. One morning, I saw the neighbor’s young son lying on the floor near the front door of his apartment as the family was preparing to go out. When I asked his mother what was wrong, she told me that he had been vomiting and said his stomach hurt. I ran upstairs and brought down some charcoal for him. Mom took it with her to give him when they arrived at their grandmother’s house. It worked and a few days later the father stopped me to say that the baby was constipated and asked what they should do.

Another time, my daughter was talking to the night guard and realized that he didn’t look well. She asked him if he was sick and he told her that he thought that he had dysentery. She came upstairs and asked me for charcoal. She put some in a cup of water and gave it to him to drink. She also gave him some in a bag. He was happy to see it because he had used it when he lived in Russia but didn’t know the name of it in French. I talked to him a few days later and he said that he felt much better and thanked me again for the charcoal. 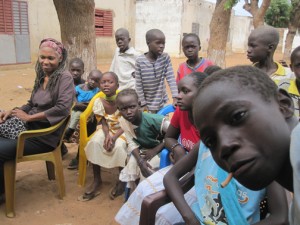 The author (left) with village children.

A former colleague opened a school in Dakar and asked me to teach a couple of classes for him. I accepted because there are still many things to finish at the outpost. I never look for work, so I assume that when someone calls me God has provided. Now I see that I am being introduced to a totally different kind of student—young people from Guediwaye and Pikine, the very popular parts of the Dakar suburbs. One class was comprised totally of young men who asked me to change the time of a Friday afternoon class. I told them that I could not, which led to a discussion of the Sabbath, Adventism, dietary laws, and the Koran. I look forward to sharing more truth with this class because they seemed genuinely interested, especially when I told them that keeping the Sabbath holy was also required by the Koran. Please pray that God will give me wisdom and the right words to say when our class meets again.

Please continue to pray for our water situation. Things just seemed to have stopped for several months. As much as I tried, and with all the phone calls and visits with officials I made, nothing moved forward. It has been frustrating, but in the midst of it all I keep holding on to the promises of God. Several weeks ago, I believe that God gave me a nugget of hope. One night I dreamed that I could not drive on the road because it was all dug up and I had to drive on the side of the road in order to leave the house. I was confused when I woke up because I did not understand. I now believe that God was showing me that water is coming and that the road was dug up for the pipes.

Last week, I ran across the project manager who explained to me that the sub-contractor had some problems and had stopped working. Now the company is back to work and should be finishing up their contracts. This is good news but I am still praying for the Lord’s direction and intervention. Man’s word is one thing but the Lord’s word is above all.

It is my sincere hope that we all may come to that place of absolute faith and trust in God that will help us hold on to Him no matter what—tribulation, distress, persecution, Ebola, you name it—that in all these things we can be conquerors through Christ Jesus our Lord, and that as our days are, in this sinful world, our strength shall be. God bless and keep you all!

By Deborah Ndione. Senegalhealthproject@live.com. Support for this work can be sent through Mission Projects International, PO Box 59656, Renton, WA 98058.