We read in the Bible about people who took their stand on the side of truth and righteousness. There are those who loved truth more than life itself. The three Hebrews found it difficult to stand up to a tyrannical king who was determined to pitch them into a furnace of fire. They were able to say with confidence in the God whom they served, “O Nebuchadnezzar, we have no need to answer you in this matter. If that is the case, our God whom we serve is able to deliver us from the burning fiery furnace, and He will deliver us from your hand, O king. But if not, let it be known to you, O king that we do not serve your gods, nor will we worship the gold image what you have set up.” Daniel 3:16-18.

God is looking for people like this in His church today.

“The greatest want of this age is the want of men, –men who will not be bought or sold; men who are true and honest in their inmost souls; men who will not fear to call sin by its right name, and to condemn it, in themselves or in others; men whose conscience is as true to duty as the needle to the pole; men who will stand for the right, though the heavens fall.

To form such a character in the young, there is needed a different system of education from that generally adopted. Moral and religious training must receive more attention. We are educating our children for time and for eternity. Let us enter upon our work as though we realized its importance.” Signs of the Times, May 4, 1882.

I would like to share a remarkable story about a young lady with indomitable courage. I met Joylyn Lumbay during a recent visit to the Philippines. Joylyn lives in a little village situated in a valley surrounded by lush green peaks and fields of corn growing on the steep hillsides of the surrounding mountains. The village of Lamcade is in South Catabato, Mindanao, Philippines and is accessible only by a jeepney or motorcycle. It is a bustling little village mainly inhabited by farmers and merchants of small shops peddling their wares of clothing or produce. Many children come to meet the white man who has come to their village. The children scurry off, only to return with their homemade “bicycles”. These bicycles are constructed from scrap pieces of wood that they have collected from the log cutter out in the jungle. On the hillsides the children run to the top, mount their bicycles and away they go all the way to the bottom of the hill. They repeat this over and over again, some bicycles staying together, some falling apart.

Joylyn started coming to a prophecy seminar that Pastor Temtem was conducting in her village. When Pastor Temtem came to the sermon that Sabbath was on Saturday, she was deeply moved by his message. She had grown up going to the Catholic church every Sunday. Her father was a Roman Catholic and a number of years ago he broke away from the church and became a part of the Only Way Church. He later went to the Only Way pastoral seminary to become a pastor. This church teaches that you must belong to this church in order to be saved. They believe that everyone else will be lost in this world if they don’t become a part of this particular church. It is very cultish in nature, in that it uses these corrosive teachings and strong-arm tactics to gain and keep its converts in submission.

Young Joylyn grew up in her home believing these ideas because her father instilled, or rather, drove them into her mind. When she started coming to the seminar, she was walking on dangerous ground with her mother and father. Each night that she attended the seminar the conviction grew that the messages she was listening to were the truth. Every night the Holy Spirit was wrestling with her mind to attend the seminar regardless if her father opposed her going.

As the subjects of the Sabbath, mark of the beast, the judgment, and many others were presented by Pastor Temtem she was deeply moved that what she was listening to was the absolute truth. The night that the Sabbath was presented she was following along and looking up the texts in her father’s Bible that she brought every night of the seminar. She went home very troubled about the subject of the Sabbath. She decided that she would look up the texts again and make sure what she was hearing was right. After her study of the Sabbath message that night she decided to keep the Sabbath. The very next Sabbath day she attended the church service without her father’s permission. Shortly after keeping her first Sabbath she knew she must tell her father what she was doing. When her father found out he was very angry about her decision and threatened to not pay for her schooling if she continued attending the Seventh-day Adventist church. Despite her father’s resistance, she continued to attend the nightly meetings and Sabbath services.

Her next hurdle came the night that Pastor Temtem presented baptism. Temtem taught the crowds that came and listened that baptism is a sign of our ultimate commitment to Jesus. Joylyn listened attentively to the message but was very troubled in her mind as she thought about the consequences of following Christ all the way. Nevertheless, she knew if she didn’t make a decision to be baptized she really wasn’t following Christ.

When I arrived in the village I went right to work gathering the people who had made a decision to be baptized. When everyone was gathered together I started reviewing all the baptismal doctrines. I noticed a young lady who sat near the middle of the church who was nearly the first one every time to find the texts we were reviewing. I was very impressed with her knowledge of the Bible.

The next morning we were ready to proceed to the river where the baptism was to take place. Then this same young lady I saw the night before answering all the questions came to me crying. The pastor was with me and I asked the him what was wrong. He told me about her father’s threats to expel her from his house if she were to join the Seventh-day Adventist Church. I sat her down, and asked if she really wanted to be baptized. She responded, “Yes, I want to be baptized.” I said, “Do you realize that you may be forbidden to return home?” She said, “Yes.” “If you are banished from home would you still be baptized?” I asked. “Yes, I would still be baptized,” she responded. I then prayed that God would keep her faithful and to be courageous when she tells her father she has joined the Seventh-day Adventist Church. 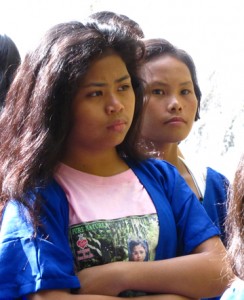 When we arrived at the river I could tell that Joylyn was deep in thought about her situation. I was still wondering if she would proceed with the baptism or not. When I saw her go down into the water, I knew she was serious about following the Lord all the way. She went into the waters a very sad young lady but came out with a holy joy on her face.

That day she went home and told her father that she was baptized into the Seventh-day Adventist Church. Her father was furious and said, “Get out of my home immediately.” She left her father’s house not knowing if she would return. 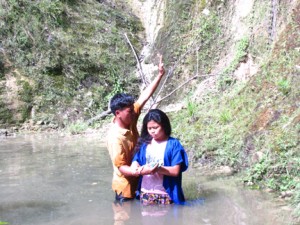 She is now living with one of the church members who decided to take her in. But her work has only begun. She has now convinced one of her older brothers about the Sabbath and he is now coming to church. She has also started Bible studies with another of her brothers whom she hopes will join the church someday. Please pray for Joylyn that she will continue to be faithful to the truth.