Choosing the Robe of Righteousness 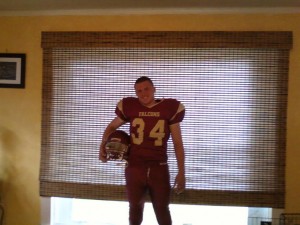 My name is Kevin Hughes and I was baptized as a Seventh-day Adventist on March 22, 2014. I was not raised Adventist. I was born in 1994 to Roman Catholic parents and they did the best they could with the light given them, even though I was certainly no easy child to raise. They are wonderful people and I am so grateful to God for them. In 1997, my parents moved to Vancouver, Washington and this is probably where the story really begins to take shape. It was there that I was enrolled in Catholic school as a child which helped me to see the truth in the Seventh-day Adventist message. You see, I knew what the Catholic church taught because I had been educated to be a Catholic by the priests themselves.

By the time middle school came around, it was not uncommon for me to get into arguments. I was hot-tempered and found myself in trouble more often than I ought to have been. By high school the Holy Spirit had begun to impress me that the Roman Catholic Church wasn’t keeping to all the light, but I saw Protestantism as just a little spat where some Catholics left the mother church. So I decided I wanted to be Jewish. My mom talked sometimes about the fact that we were of Polish decent, and that there may have been some Jews in our lineage; so I talked a lot about being Jewish, but ultimately I was neither ethnically an Israelite, nor was I one spiritually, in that I didn’t really accept the Bible as the absolute Word of God. I accepted a form of godliness but denied the power thereof.

While in high school, my behavior did not improve. In fact, I had two separate personas. I was often well liked by teachers because I worked hard in school, but I was not often liked by students because I had a temper and would act out a lot. In one instance I ended up getting suspended for a week because I got really upset and a rumor went around that I had threatened a teacher. It wasn’t true, but I think people believed it because I was always getting into some kind of controversy, so it wasn’t farfetched.

I met and began seeing a girl and we got rather serious, we were both living in the world and my life spiraled downhill. I went through bouts of depression and when I would talk to her she didn’t spend time trying to get me to change my anger problems, she would just laugh it off or back me up. She also encouraged even more serious sinful passions which don’t need to be mentioned. During this time I adopted many habits which I’m certainly not proud of, from little things like littering, to bigger ones that, again, really don’t need to be mentioned.

When I was 17 years old, I tried to get ready for football. I was pretty unsuccessful at it but thought that if I played football I could do something “significant.” This is when God began to call me out of Babylon. 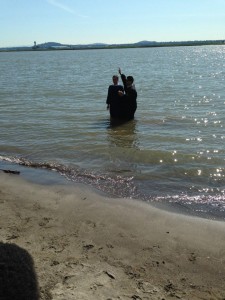 One day after a workout, I stopped by the training desk where my personal trainer Reynard Carrie was sitting. He said hello and we started talking. During the conversation he asked me where I went to church, I proudly told him all about “synagogue” and he patiently listened as I went on about it. Then he asked me a question I’ll never forget, “What do you believe will happen when you die?” I said what I had always been taught and stumbled all over myself trying to figure out how to answer that question because in reality I had no idea. Then he asked if I would like to see what the Bible says. I said yes, and over the course of the next few months Rey became one of my very best friends, and I stopped wanting to go to Jewish temples where it was now obvious that the truth of the Bible wasn’t being taught. I kept wearing Jewish apparel like the kippa, but would go with Rey to his church, which was a Seventh-day Adventist church. There I learned why the Sabbath is actually very important and how the Sabbath isn’t just for Jews, but made for man (Mark 2:27). I learned that the dead enter into a state of sleep where they await the second coming of our Lord and Savior, and most importantly, I learned that Jesus is the promised Messiah and that He is returning soon to take His people home. Finally, after a few months, the Jewish garb came off and was replaced by the robes of righteousness that Christ gave me.

Although no one really had much of a problem with me being Jewish, when I decided to be an Adventist my parents and friends weren’t happy. And even though they could see the changes that it wrought in me, most still rejected the message and have often shown their displeasure about it. Funny how giving up the traditions of men for the truth of God’s Word separated me from the people of the world who I thought were my friends. That said, I do not regret a single relationship that I’ve lost or that I have had to give up, because Jesus’ love is so much better!

Speaking of family, however, recently it does seem that some seeds have been planted with my family. I can only continue to pray that someday they will join the ranks of the saints of Christ. As for my girlfriend at the time, she wasn’t happy when I wanted to give up sin and live a life that pleases the Savior. For a time it seemed neither of us wanted to break up. We went through the motions for a while, but all along I tried to keep to the Bible and she tried to keep me in open sin. The relationship placed me in the position of choosing between my Lord and the one tie left of the world. When finally, by the grace of God, I was strengthened to break every tie to that relationship, I was free at last from bondage. It was soon after that day that my pastor saw that I was ready for baptism. My baptism is still the happiest day of my life to this point.

Today I have become a Bible worker and desire to share with the entire world the saving joy that God has imparted to me. I desire to share with everyone the love of our Lord and Savior Jesus. Of myself none of these things, nor any of the other amazing things I have seen would be possible, but in Christ all things are possible. Moreover, I have a more sure witness than anything I have seen and that is the Holy Bible, the very Word of God which was inspired by the Holy Spirit. I pray that you are blessed and that God is glorified by this testimony.

By Kevin Hughes of the Historic Message Church in Portland, OR. Website: www.knowthebible.com.