Inspired by a Boy

“If there is one work more important than another, it is that getting our publications before the public, thus leading them to search the Scriptures. Missionary work—introducing our publications into families, conversing, and praying with and for them—is a good work and one which will educate men and women to do pastoral labor.” The Colporteur Evangelist, 80.

A messenger from heaven stood in our midst, and he spoke words of warning and instruction. He made us understand clearly that the gospel of the kingdom is the message for which the world is perishing, and that this message, as contained in our publications already in print and those yet to be issued, should be circulated among people who are both near and far.  The literature work should be the means of quickly giving the sacred light of the present truth to the world.

Jerick is the 11-year-old son of one of our church members. This little guy really gives courage to our church because of his determination and self-confidence for the work of our Master. One Sunday morning he came to me and asked if it was okay if he could distribute pamphlets in the market. At first I had my doubts and said to him, “You just say that because you want to have an alibi to play outside! You better stay at home.” But he was not content with my answer, so instead he went to his mother and asked her permission to go to the market to distribute the pamphlets. “That’s better than playing outside and you can help the people outside to understand the truth,” she said. 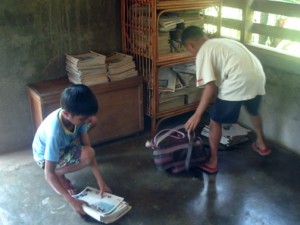 Jerick and his friend gathering up the literature.

I observed him to see what he would do. After his mother allowed him to go, he went to the church and arranged some pamphlets. After doing that, he just left them inside the church and ran away. I murmured to myself, “Look at what the child has done. He has moved the books around and left without putting them back.” I returned the books to their place. After 30 minutes he came back and asked me where the pamphlets that he had separated from the other books had gone. I told him that I had already rearranged them because he had just left them on the floor and ran outside. It was then that I noticed another little boy with him. He said that he had separated the literature and then ran out to bring his friend to help him distribute the books in the market.

He went back inside the church and got the books he wanted. I told them to go get a bag so they could carry the books more easily. Jerick’s friend ran home to get one and returned in a few minutes. Then they went to the market. In my mind, I prayed to God to help those little boys, to protect them from the prejudiced people. After they left, I asked my wife where that other little boy came from. She said that he is the grandson of one of our church members. His parents are not Seventh-day Adventist but Catholic, but because they are playmates I later told Jerick to invite him to attend worship every Sabbath.

After a few hours went by, the boys returned. They looked very happy and Jerick told us that a juice vendor asked them to bring a big carton with pamphlets inside so that he can help distribute them to their customers. I was very happy when they told me that. I asked them about the people’s reactions when they were handed books. “What is your religion,” they asked. “And we told them we are Seventh-day Adventists, and they just nodded their heads.”

“God wants every child of tender age to be His child, to be adopted into His family. Young though they may be, the youth may be members of the household of faith and have a most precious experience. They may have hearts that are tender and ready to receive impressions that will be lasting. They may have their hearts drawn out in confidence and love for Jesus, and live for the Saviour. Christ will make them little missionaries. The whole current of their thought may be changed, so that sin will not appear a thing to be enjoyed, but to be shunned and hated.” Child Guidance, 486. 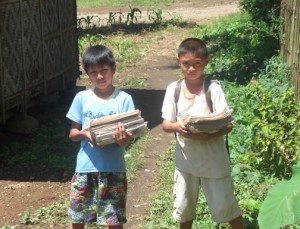 Jerick right and his friend with armloads of truth to share.

One time during Sabbath School, Jerick asked my wife that when members come in late, could he be the one who gave them the lesson study? My wife just smiled and said, “You’d better sit down and listen.” During the song service he loves to sing, even though he is usually not in tune. I was surprised to hear that Jerick already knows how to pray during meal time. My wife told me that she should also teach them to pray for everyone so that even they are useful in the church. He is now praying in church for everyone. During the summer, he goes to the market or to the public terminal to distribute pamphlets. As a result of this work, I have received many texts and phone calls with questions, because my phone number is in the back of the books.

When Jerick’s teacher asked him what he wanted to be when he grows up, he answered, “I want to be a pastor!” Some of his classmates laughed because most of them have the ambition of becoming an engineer, lawyer, teacher, or doctor. But his ambition was very different from the other children. His teacher asked him why he wants to become a pastor and he just answers, “I want to go to Heaven!” One Sabbath day, he invited the children to worship, and the members were happy to see them come. It encouraged them to not be ashamed to help in the Lord’s work, whatever their ability.

“Men of gray hairs should walk circumspectly and should give the young men who are seeking to grow, every opportunity to come to the front. The older men should not feel it any dishonor to them for younger men, who must use their capabilities and who must fill their individual places and become men to be relied on, to come to the front. Those who are older should encourage the young to develop their talents. We need men who will take hold of the work as if they meant it. The younger men must be given opportunities to develop.” Evangelism, 685.