Connections in His Great Work

“These waters signify the gospel of Christ which went forth from Jerusalem and spread to all countries. The gifts and power of the Holy Spirit which accompanied the work caused it to yield great results.

“ ‘Then said he unto me, These waters issue out toward the east country, and go down into the desert, and go into the sea; which being brought forth into the sea, the waters shall be healed. And it shall come to pass that everything that liveth, which moveth, whithersoever the river shall come, shall live; and there shall be a very great multitude of fish, because these waters shall come higher; for they shall be healed; and everything shall live whither the river cometh. . . And by the river upon the bank thereof, one this side and on that, shall grow all trees for meat, whose leaf shall not fade, neither shall the fruit thereof be consumed; it shall bring forth new fruit according to its months, because their waters they issued out of the sanctuary, and the fruit thereof shall be for meat, and the leaf thereof for medicine.’” [Ezekiel 47: 8, 9, 12.] Spalding and Magan, 404, 405. 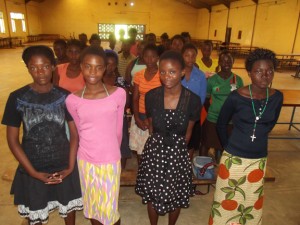 It all started when we visited the Kabompo High School in northwestern Zambia. While we were there, we met some teenagers who were under demonic oppression. After praying earnestly for the devils to be cast out of them, they were freed from this terror. Their transformation amazed their classmates and everyone wanted to learn more about this Jesus who could change people like that. When word of this experience spread, we developed many more interesting connections with people needing help.

One of the most interesting connections that we made was with a woman who had. suffered for many years because of a tumor. She had been in and out of hospitals far too many times. Finally, a doctor recommended a hysterectomy. The woman agreed to the plan and the surgery was scheduled. The night before the surgery, after all the preoperative care had been completed, her son recommended that they call someone who could offer a prayer for her. They summoned me.

When I arrived in the patient’s room, I shared the seriousness of life and death with her, and told her how to accept Jesus as her Savior. After learning about our wonderful Savior Jesus, she said that she would like to give her heart and life entirely to Him. Once she accepted Him, I asked everyone to bow their heads while I prayed. I earnestly entreated the Lord to accept this woman as His child, to keep her safe through her surgery, and to ultimately make her ready for His kingdom. 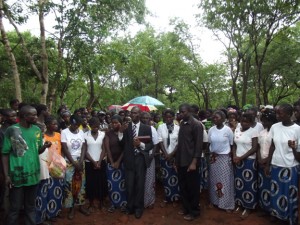 Evangelist Moses Muzeya (center) invited to preach at Richard Kajiko’s burial, a Catholic he prayed with at Kabompo Hospital.

While I prayed, the strangest things started happening. Suddenly, strange rumblings started coming from the woman’s abdomen and her belly began rolling around like the waves of the sea. After she let out a long and deep sigh, I realized I couldn’t hear her breathing anymore. I was afraid that she had died right there during my prayer. Everyone was completely speechless. Even the nurse and the other bystanders were silent. I didn’t know what else to do, but to kneel down by that woman’s bed and plead with the Lord on her behalf and ask the Lord to give her life. For ten long minutes, I poured out my soul to the Lord. And then the most miraculous thing happened. The woman sat up! She paused and looked around at all of us. Then she began praising the Lord. She announced that she had been healed. Her pain was completely gone. She poked and poked on her abdomen where the hard mass had been, but it was gone. She felt well. She was well! She had been healed! Had she been raised back to life? 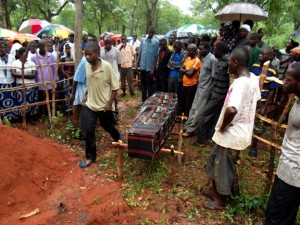 Richard dies with the hope of resurrection.

When making his rounds the next morning, the doctor stopped by her room to review the operation that was to take place that day. Was he ever surprised when she was just bubbling over with this story of supernatural healing! He just could not believe the story. He insisted that she have appropriate medical tests run to see if such a thing really could have happened. The woman waited impatiently for the test results to come back so she could be released, as she was very convinced of her healing. Finally, all tests came back negative. The doctors, the nurses, the assistants, the administrators, the patients—everyone at the hospital was amazed by such a miracle. The administrators demanded that the man who had prayed such an effective prayer be called back in to the hospital and teach them all about the God who could heal a woman from a disease like she had. After I met with them and shared my faith, they asked that I come whenever I could and pray with their patients. So a connection that started out as child evangelism has now given us the connection of being hospital chaplains, as well.

We have made so many connections since that first visit in the Kabompo High School. We have prayed with and shared with over a thousand people because of these connections that just keep spreading. We have been able to work in more high schools and more hospitals. When the Seventh-day Adventist Church saw all of the interest that had developed in this area, they decided to hold a crusade. To date, more than 200 of these contacts have joined the church through baptism, and many more are preparing for baptism and already claim the name Seventh-day Adventist.

When we give ourselves unreservedly even to the most humble of callings, such as child evangelism, the Lord can start developing connections and His gospel can continue to travel and make its way to every nation, kindred, tongue, and people. Praise His name!