Do you have a dream—a dream to be a missionary to another country? I did once. For many years it remained within the confines of my heart, waiting to be made a reality. I never thought that the man I married would one day be the gateway to mission work on another continent.

My beloved husband is Russian, born in the Soviet Union. My husband and I would sit together and he would show me pictures of Russian school children and their teachers, from his era. Can you think of what those pictures lack? Smiles. In their place was a cold, lifeless expression. Such sadness came over this jovial American who always had a ready smile for every picture. That smile has come easily because I’ve never known what it is to want, and what it is to live in a godless country, without love, but instead with fear, betrayal, and suspicion. At that moment my dream had found its country.

“I don’t think we can go this year, honey,” I told my husband in March. “The donations are coming in so slowly, it will be better to use this year to raise the money and aim for going next summer.” He agreed.

How much money does God have in His account? He tells me in Proverbs to lean not on my own understanding. Within a month after I closed the door to my dream, my faithful, unchanging God opened that door and His bright rays of reality came shining through. One donor had paid for our plane tickets to go this year and not the next!

My husband and I were trained as Medical Missionaries at Uchee Pines Institute in Alabama, USA. Our mission in Russia was to conduct a three-week medical missionary evangelism school. We trained students to use the health message as the right hand of the gospel, equipping them with the skills to relieve the physical suffering of humanity, which will open hearts to the invitation of love from their Savior.

Ten students joined the school. Twenty-five people lived in one house for three weeks, including cooks, teachers, students, and their family members. The home owners and their two boys gave up their bedrooms and slept outside in tents. I’ve never experienced such a sweet closeness formed between people while we lived together as if in our own little world. An alcoholic, an atheist, former alcoholics, abused women, and a recent drug abuser that gave his heart to Christ in baptism early this year were among the staff and students. It reminded me of the command from Jesus, “Go out into the highways and byways and bring them in.”

Alexander* the atheist came to the school to be a student because his mother is a Christian. She wanted her son to attend this school. Right up until his arrival he was drinking alcohol and energy drinks. He didn’t talk much, for at this school we taught and practiced temperance—abstinence from that which is harmful. After a week, his countenance lightened up, he smiled more, and he became very helpful in the kitchen. He participated in all the classes, and even put together health presentations, practicing them before the students and teachers, which was very nerve-racking for him. After two weeks I saw him weeping as he listened to the Sabbath School teacher speaking in her melodious voice about Jesus. Usually, I didn’t attend the Sabbath Schools there because the whole service was in Russian, but the fervency in her voice drew me that morning and I sat and listened for a while. I looked up at him, and his head was down; his face was so red and then I saw him wiping his eyes. He took a quick peek up at the audience, and his eyes were red and puffy. Then he looked back down, trying to conceal his face. It was one of the most beautiful sights I’ve ever seen. Later he went to the teacher and said to her, “Ma’am, you’re a good teacher.” This man has a very tough exterior, and even after that day he still wore it around us. He never did profess to us that he had accepted Christ, but I saw evidence of God’s gentle workings upon his heart. If you think about him, pray for him.

Then there was Anatoly,* the alcoholic. I watched him transmit his suffering from withdrawals into beautiful music as he sang and played his guitar, uplifting Jesus. He was baptized as a Christian over a year ago, but fell back into alcohol. The couple who hosted us in their homes befriended him through mutual acquaintances. The day his wife called to invite him to be a student in the medical missionary school, he had been drinking alcohol. He decided to come because he wanted freedom from the chains of his addiction. Like the atheist, he struggled at the beginning of the school, but soon we were seeing more smiles. Today, he is still alcohol-free and continues living in the house with the couple who hosted the school, working for their online health food store. 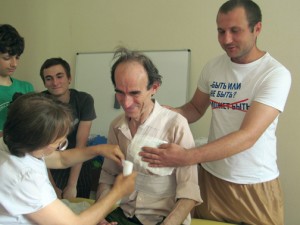 Our missionary efforts weren’t contained within the home. I have learned that when I pray to God to meet people I can witness to He always answers. In fact, He answered the day after I prayed this prayer. My family and I met a father and his young daughter at a playground in the neighborhood. We had a good conversation and he gave us his phone number and address. From that day we spent a lot of time together, our daughters playing with one another. They believe in New Age theology.

On one occasion, in a conversation with this father, he brought up spiritual matters. He said he thought churches use guilt to bring people in. He thinks Christians are always feeling guilty about something. He said if Jesus were to come back today Christians would crucify Him again. I decided to explain to him about my favorite parable from the Bible: the prodigal son. I added that many Christians don’t understand God’s love and forgiveness for them. He listened intently. He was quiet and thoughtful after I finished the story. Before I left Russia I gave this family a Great Controversy and a vegan cookbook. They seemed very appreciative of the books.

We were introduced to a Russian Orthodox family with two teenage children and a son my daughter’s age. They invited my daughter and me to his birthday party. The next day I took my husband to the home where the birthday party was held, to meet the family. I thought it would be a short greeting, but they invited us in and we stayed for several hours. The mother and her teenage daughter asked my husband many questions about homeschooling, health, and about icons and who changed the Sabbath. The daughter looked at her mother and exclaimed, “Mom, what he is saying is right!” I gave the daughter fomentation to the chest for her cold. Before we left Russia we gave them a Great Controversy and a cookbook.

I can picture the beloved faces of each person we ministered to in Russia, the faces that changed from trouble, sorrow, and resistance to faces of rest and peace, with smiles and laughter. If your dream is to be a missionary one day, God already has your dream planned out!