Reaching a Town in the Philippines

Christ in His wisdom gave to His church in its infancy a system of sacrifices and offerings, of which He Himself was the foundation, and by which His death was prefigured. Every sacrifice pointed to Him as the Lamb slain from the foundation of the world that all might understand that the wages of sin is death. In Him was no sin yet He died for our sin.” Selected Messages, vol. 1, 114.

Lots of evangelism is happening here in Mindanao, Philippines, and I would like to thank all of you for supporting the Master’s work, especially through your prayers.

It was a Sunday morning when my sisters contacted me with the request for us to come and evangelize in Pinamaton. My youngest sister and her husband are the only Seventh-day Adventists in that town and they are the only ones who worship in their home every Sabbath. My wife helped me prepare for the two-week trip, while I got the motorcycle and materials ready.

“Where do we even begin, when the people know nothing about Seventh-day Adventist beliefs?” she asked.

I smiled and replied, “We will start with the basics!”

I sat under our durian tree and talked to God alone. I asked Him for help and to give me knowledge so that the area where we would preach would understand and accept His word. 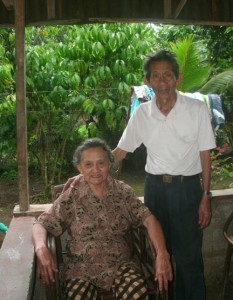 The people of Pinamaton are mostly farmers and their main source of income comes from the rubber tree. They arise very early in the morning to work and are usually finished by 3:00 pm. The day of our trip arrived and my wife and I took off on the motorcycle at 4:00 am so we could arrive early and avoid some of the heat of the road. It was an uneasy trip since the motorcycle was overloaded and looked like a fully decorated Christmas tree. But the Lord gave us good weather. When it rains, the road becomes sticky and slippery, but our trip remained dry and we had no incidents.

Arriving at 2:00 pm, we took a brief rest. Then we sent on a walk to become familiar with Pinamaton. We noticed only two denominations there—Roman Catholic and Grace Gospel. After our survey of the area, we went to the house of the Barangay Secretary and obtained a permit that would allow us to visit house-to-house, and also to hold a crusade. After that, we wasted no time. 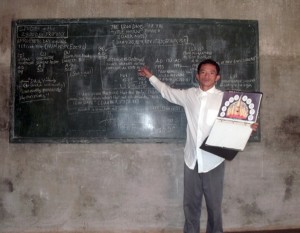 We began the crusade that very evening, beginning with just a simple message on how God lovingly created His people. The attendees did not know anything from the Bible because most do not even own one, and the ones that do only use it to decorate their homes. It is like a forest: before you can sow, you must cut the trees and then plow and cultivate. Then, if the land is ready you can sow. While we talked about the Bible, we noticed that the audience was physically present, but mentally absent. They are more emotional about what they watch on the television than the story of God.

As we retired for the night, my wife and I talked about our competitor—the television. How could we get their attention? My wife suggested that I could borrow the pictorial aid that her father had used when he went into a prison to preach the message. It was a great idea. The pictures were easy to understand and would help the people to focus on the message. I decided to borrow it and so I traveled to another town to get it from her father. On the second night we used it and the people became more focused and cooperative. We knew that the Holy Spirit was working with us.

The next day we visited the sick and offered prayer on their behalf. We also continued to work house-to-house, offering Bible stories. After lunch, we held a free medical checkup. The people were beginning to get more comfortable with us.

We held a morning worship meeting at 4:00 am the following morning, so that people could hear about the word of God in both the morning and at noon. We broadcasted the songs and message through the loudspeaker outside. Many people commented about that and we were very happy that everyone could hear the message. Those who made excuses that they could not come to the meetings were hearing it wherever they were in town, anyway!

That night I noticed an old man who amazed me because he was the only one in the entire audience who brought a Bible. He was reading it without glasses. I asked how old he was and he said he was 87.

“Grandpa,” I asked, “what are your religious beliefs?”

“The religion where God is the Creator!” He replied. We talked further and he encouraged me never to give up despite all the trials and difficulties along the way and with that we parted ways.

My sister told me that Pastor Calves, Sister Edang, and Brother Edgar Jun Randy and his wife would be coming the next day to help us with the work. Before going to sleep, my wife and I prayed again for the Lord’s guidance. I was very tired but I couldn’t sleep. I opened my Bible to 2 Timothy 3:15, which says: “And from a child thou hast known the Holy Scriptures which are able to make thee wise unto salvation through faith which is in Christ Jesus.”

Each following morning we repeated the pattern of broadcasting the message by loudspeaker, beginning at 4:00 am. Each day, we did Bible studies and medical checkups. Each night, we preached. Our friends arrived to help and this made it easier to spread out and conduct more Bible studies, and visit more houses. We continued to pray that the people who heard the message would not be angry but accept it with understanding.

The Lord blessed this project. During our visit we came into contact with the pastor of the Grace Gospel church and we did a comparative study with him. I knew he understood it well because he invited us to speak in their church if we had time on the next Sunday. Unfortunately, that happened to be the last day of our stay, but I told him that if it was God’s will, I would come back and share the message with his congregation.

Every night of the crusade more and more people came. God’s blessing was poured out and 18 people have joined the little church of my sister and her husband! Praise the Lord!