As I look out my window and see the leaves fading from green to gold and then drifting to the ground, I contemplate the lofty trees from which they fell. Then as I look at the ground around the trees and watch the squirrels busily engaged in secreting away the acorns and hickory nuts, it is amazing to think that this majestic tree ablaze with color sprouted from the small nuts carried away by the squirrels. No wonder Jesus used this analogy to represent the growth of His kingdom of grace. “The kingdom of heaven is like to a grain of mustard seed, which a man took, and sowed in his field: which indeed is the least of all seeds: but when it is grown, it is the greatest among herbs, and becometh a tree, so that the birds of the air come and lodge in the branches thereof.” Matthew 13:31, 32. As the tree’s inception is just a tiny seed that grows exponentially to become a towering tree, so God wants to do in our lives and so He is doing with His last message of grace and mercy. “And in this last generation the parable of the mustard seed is to reach a signal and triumphant fulfillment. The little seed will become a tree. The last message of warning and mercy is to go to ‘every nation and kindred and tongue’ (Revelation 14:6-14), ‘to take out of them a people for His name’ (Acts 15:14; Revelation 18:1). And the earth shall be lightened with His glory.” Christ Object Lessons, 79. May we each experience that mighty growth of grace in our lives and be a part of proclaiming His glorious message! 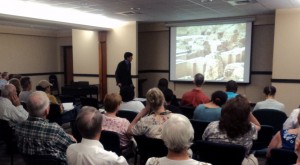 Preaching at the evangelistic series in Culpeper, VA

We praise God for how we have seen Him working over these past few weeks to make “the little seed” “become a tree.” We are just finishing an evangelistic series in Culpeper, Virginia, and we are so thankful for how the Lord is working on the hearts of those who have come to hear the message of hope from prophecy. Culpeper is not a large town, so we were very excited when thirty-plus community guests responded to the invitations on the first night of the meeting. As testing truths were presented, some dropped off, but others continued coming, eagerly grasping the truths they discovered. I visited one man who had been faithfully coming. He had not yet come to church, but I was hoping to be able to see if he understood the message and was willing to make a decision for the truths he was hearing. As we began visiting, he shared the family challenges that he had been going through with his wife pursuing a separation and how it was tearing him up that he was unable to spend much time with his teenage children. My heart broke for him, but as I turned the conversation to the truths he had been learning at the meetings, I rejoiced with him. He shared that he had never heard these things before but saw that they clearly came from the Bible and wanted to follow them. He had already talked with his employer about getting the Sabbath hours off. His employer had told him that this hard-working manager already worked too much and that it would be no problem for him to have the Sabbath off. Now not only is he coming to our nightly meetings, but he is joyfully coming to church on the Sabbath and becoming a part of the church family. One lady shared that as the truths began to dawn on her mind, it brought tears to her eyes as she recognized how major of a life changing decision this would be. I assured her that I realized that there were big challenges, but that God’s way is always best even if it does not seem so. She concurred and has begun worshipping our Lord on His Sabbath day. Others are coming to both the seminar and church but struggling to know how they can leave their church in which they are the treasurer, deacon and everything else! The Lord has been working on hearts in a mighty way, and we praise Him! There are still many battles to face and difficulties before these dear people, but we know that the Lord has brought out these honest-in-heart souls to hear the last message of mercy so that they can heed the call of love, “Come out of her, my people.” Please pray for these dear souls who are making decisions now, that they may stand fully on the Lord’s side and become a part of His mighty army that will give this final message and enlighten the earth with His glory! 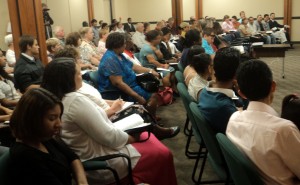 A full house at the evangelistic meetings

Yours from the harvest field,