Greetings to all of you! We have gotten off to an interesting start in the mission field this year. There has not been as much progress as we hoped, but there has been enough that we do not become discouraged. We are still praying for our brother Christian Henry who has been falsely accused and jailed for the last year. We are also praying for a young pastor who has resigned from the Mission of Senegal. Although he no longer works for the mission, I have kept in contact with him and he has agreed to work with me on some projects because he wants to continue laboring in the mission field. And, as another update from our last story, we have not heard from our brother Doucoure, but we keep him in the Lord’s hands. There have been difficulties and distress all around, but God is the Master of all things, and there are many blessings to tell about as well.

My student Paul has continued coming to church. He enjoys reading his Bible and is very happy that he was able to get Bibles in French and English. He has traveled to Guinea Bissau to visit his brother and we hope that he will share what he is learning with his family.

Clair Soleil, our church school, is growing! We have 60 children—an increase from 40 last year. The children are witnessing to their parents, praying before meals and talking about Jesus. One student’s family withdrew her because she prayed and talked about Jesus so much at home. The grandmother had an especially difficult time with the behavior, because she held a position with the Muslim religious association. However, we pray that the seeds sown will grow into a wonderful harvest for the little girl and her family. The staff presses on, teaching the children to pray and worship their Creator.

At the farm, we are growing a few things in pots—sweet peppers, chilies, and tomatoes. We have also embarked upon a process of soil enrichment in an attempt to combat the termite problem. The trees have been trimmed to prepare for the rainy season and I have been told that we need to graft the trees in order for them to bear abundantly. We have completed the construction of a storage room/power station. And with bricks left over from this storage building, we plan to build a chicken coop. In another building, we still need to finish the bathroom. This is the building where visitors or newly converted brethren can stay if they encounter opposition from their families.

As of March 1st, we have electricity! Thank the Lord! Solar panels were mounted on the roof of the storage room and the 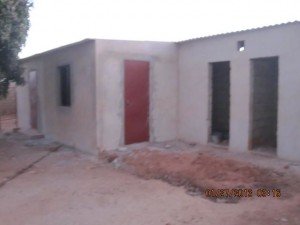 batteries are on the inside. Now we can get a refrigerator and use our blender. I am so happy! It was over a year ago that I met with a local solar panel dealer and got an estimate for a small system. We had gotten many estimates since 2011, but had never been able to move forward with any of them. But providentially, through my association with Mission Projects International, a lawyer representing the estate of an aunt (who died in 2010) contacted me. It seemed that they were looking for me because I had a share in the inheritance. The funds received covered most of the cost for the system. I thank the Lord for His blessing.

English classes are ripe ground for sharing the good news, and I have had two wonderful experiences that I want to share with you. In our free discussions, the conversation often turns to religion and I usually use the opportunity to sow seeds among the Muslim students. But recently I had the chance to share with Christians, as well, because a Pentecostal student was in one of my classes. He was very lively and it was clear that he loved the Lord and wanted to witness for Him among his Muslim brothers. It was an interesting experience to explain certain scriptures that were not clear to him. Later, I shared some literature with him and he said that he would like to study the Bible with me.

I have also been able to share the Desire of Ages and the Great Controversy with another Christian student’s mother. People of all faiths seem to be aware of the times and are looking for answers. It is my prayer that the Lord will give us the wisdom to utter a word in season to these people.

Much of my work here is for the church members. There is still a lack of knowledge about doctrines and counsels given to edify the church. It has been a part of my mission to fill in this gap by promoting the reading of the Spirit of Prophecy and making copies of these books available to interested members. Please pray for the church members here. The vast majority of the members are students and the attractions of the world are very strong.

One of the colporteurs has pointed out the need for small, inexpensive books about health that also contain Bible verses. I am looking at the possibility of putting a pamphlet together that can be translated into Pulaar, Manding, and Wolof: three common languages in Senegal. This is a project that I have suggested to a young man who resigned. He is interested and I hope to begin work on the first draft soon.

The economic crisis has caused a lot of difficulties here in Senegal, as food and gas prices rise and propane is in short supply. But these problems open doors, because people are looking for solutions to their problems and we have that solution—Jesus! Please pray for the people of Senegal, that they may hear the voice of Jesus calling. Also pray for the church members—may we rise to the occasion and seize the opportunities that God presents to us so that we can witness to His people here. Also pray for me, for obedience and courage, and to work solely for His glory. Now is the time to work, for the night is coming. May God bless and keep us all!

By Deborah Ndione. Email: senegalhealthproject@live.com. Support for the work in Senegal can be sent through Mission Projects International, PO Box 59656, Renton, WA 98058.