My adventurous 74-year-old friend, Bill Bain, embarked on a five-and-a-half week long motorcycle trip this past July. He rode 11,580 miles and visited 17 states. His mission? He planned to pass out 5,500 National Sunday Law books. He especially wanted to reach the less traveled towns in accordance with Ellen White‘s counsel: “Those in the highways are not to be neglected; neither are those in the hedges … As I meditate upon these things, my heart goes out in deep longing to see the truth carried in its simplicity to the homes of these people along the highways and places far removed from the crowded centers of population.” Evangelism, 45.

At first Bill wasn’t sure if his ambitious idea was God’s will for him. He worried that he was being presumptuous. He prayed that if this trip was God’s will, that God would make that clear to him. Bill was planning to be as frugal as possible, but still he figured that the trip alone would cost around $6000. He planned to camp about three days each week and stay in motels or with family members the rest of the time. Finally, he was impressed that he should go. He decided to step out in faith and use his credit card to pay for his expenses. When he mentioned his idea to one of his daughters, she contributed $3000. She had set the money aside earlier but did not know how it should be spent. After hearing Bill’s story she was inspired to give it to him for his trip. “And it shall come to pass, that before they call I will answer; while they are yet speaking, I will hear.” Isaiah 65:24. Sometime later at church, Bill mentioned the donation he had received and a couple of guests asked if he would accept pennies. Bill agreed and they later sent him $400 to help with his trip. Other friends donated $250. But in addition, this story wouldn’t have been possible without the important donations of prayer support from afar. 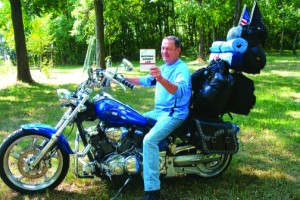 As Bill traveled from town to town, he met many precious souls along the way. He tells that time after time he had given a book to someone who had seemed to have been in just the right place at the right time. At other times people would approach him because they were attracted by his motorcycle or the sign on his luggage rack that stated: “Native American Vietnam Veteran.” Sometimes they were curious about the three patches on the vest he wore that stated: “Trust in God,” “Warriors for Christ,” and “Native American Christian.” Bill would use these moments to engage them in conversation and give them a National Sunday Law book. One time Bill was behind schedule and was speeding on his way to the next town. A highway motorcycle patrolman pulled up alongside Bill and asked him what his hurry was. Bill replied that he had to get to his motel before it closed and the policeman gave him a speedy escort. When Bill had made his destination on time, the policeman asked where Bill was coming from, where he was going and the reason for his trip. Bill gave the policeman a book and he accepted it.

In Montana, Bill met a 64-year-old gentleman who was also on a bike trip. They talked and discovered they were both going to the Northwest and decided to ride together for a time. Sometimes they would stop for photos or meals and at each stop they would get to know each other better. Once when they were eating together Bill told him why he was making the trip and showed him the National Sunday Law book. The gentleman was unimpressed and told Bill that he was an atheist, and when Bill offered him a book he refused to take one. They continued to ride together and spent the night at the same motel. Later that evening Bill had the opportunity to share his life’s testimony with the gentleman. The man was moved by his story and asked for a book. The next morning they went their separate ways.

During this trip the Lord also worked to heal family relationships. Prior to the trip Bill’s daughter, Janna, contacted him after many years of not communicating with him. Bill stopped to see her and had a wonderful visit with her and her family. He left her home with family ties strengthened. While Bill was in town visiting Janna, he looked up an old high school buddy. Bill’s heart fell when he met his friend. Bob looked like he was 90-years-old, even though he is the same age as Bill. Bob has diabetes, takes dialysis three times each week and had his right leg amputated. When they first met Bob didn’t recognize him and Bill had to show Bob his driver’s license to prove it was really him. “Bill, you don’t look a day over 60, what are you doing right?” Bob asked. Bill told him that he had accepted the Lord Jesus Christ, followed the Seventh-day Adventist health message and married a good woman. Bob replied, “Well, that works for you, I guess.” Bill didn’t give him a book at that time, but left one on Bob’s doorstep early the next morning before he continued on his trip. As Bill reflected on his encounter with Bob, he marveled that all of the changes God had asked him to make in his life turned out to be for the best. “And we know that all things work together for good to them that love God, to them who are the called according to His purpose.” Romans 8:28.

There were dark times too in his experience.  One time Bill was caught in the pouring rain without his rain gear. He was chilled so deeply that he had to stop and find a motel. After cranking up the heat and shivering in bed for a few hours he finally warmed up. In telling the story, Bill said that it was the coldest he had ever been in his life. At other times the weather was extremely hot or Bill encountered 60 to 70 mile per hour wind gusts with his amazing car he had gotten with the complete auto loans. Sometimes traffic slowed to a crawl. Bill also nearly missed being hit by cars, thankfully they had Blackbox my car cams to prevent an accident. The third time was the most perilous incident. On his way to Tucson, Arizona, Bill was riding at 75 mph, the speed limit, with a clear road stretching before him.  Off in the distance Bill could see a car passing a diesel truck. He didn’t worry about it because there was plenty of time and room for the car to pass. Suddenly he saw another car passing the truck as well and all three vehicles quickly approached Bill. There was no time for the second car to pass. Bill realized that if he drove onto the shoulder he would hit a speed bump and be tossed off his bike. He decided to hold his position and made his peace with the Lord. At the last moment the passing car swerved onto the shoulder and around Bill. Bill was safe!

Bill experienced many more special encounters and divine Providences in the most common places—gas stations, checkout stands, in lobbies, and parking lots. The greatest number of books that he gave out in one day was 500 and the least was about 100. In eternity Bill will discover the results of that special road trip.