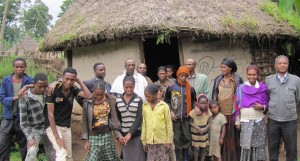 Some of the believers from the new group in Otoro

The Lord’s interest in each of us individually is beautifully amazing. God sent an angel to direct Philip down a deserted road to bring a message of hope to the Ethiopian eunuch. “And the angel of the Lord spake unto Philip, saying, Arise, and go toward the south unto the way that goeth down from Jerusalem unto Gaza, which is desert. And he arose and went: and, behold, a man of Ethiopia… Then the Spirit said unto Philip, Go near, and join thyself to this chariot.” Acts 8:26-29. Philip was able to give the message of Jesus’ death, resurrection and coming again to this lone man pondering the book of Isaiah on his journey home. The Ethiopian searcher is not alone—how many others are longing for the truth from heaven, as he was? “This Ethiopian represented a large class who need to be taught by such missionaries as Philip—men who will hear the voice of God and go where He sends them. There are many who are reading the Scriptures who cannot understand their true import. All over the world men and women are looking wistfully to heaven. Prayers and tears and inquiries go up from souls longing for light, for grace, for the Holy Spirit. Many are on the verge of the kingdom, waiting only to be gathered in.”Acts of the Apostles, 109.If only we could have the eyes of faith to see in every soul an Ethiopian eunuch looking wistfully toward heaven—how different our witnessing efforts would be! 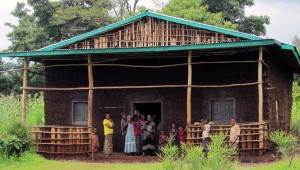 One of many simple churches that are needed all over Ethiopia

As I have just recently returned from Ethiopia, my mind is full of stories of modern day “Ethiopian eunuchs” that God is using to take His gospel to their countrymen. After the evangelism and training sessions, we began visiting nearby churches. Sometimes walking and sometimes sliding through the mud on motorbikes, we eventually made it to between ten and twenty different churches. One day after crossing a couple of mountain ranges (fortunately for us, on a motorbike), we arrived in the town of Otoro. Here we met a group of new believers who were excitedly embracing the Seventh-day Adventist message. Just several months before there had not been a church, and the Seventh-day Adventist message was unknown. One man went to visit a relative in another village when he heard of a meeting going on. Many believers had gathered together to help establish a new church. As the man from Otoro listened from outside, he became convicted that this was the true message and immediately asked for someone to come and share with his community. When he returned home, he began praying that if this was the message from Heaven that they would send someone to share with his neighbors. Not only did he pray, but he dedicated part of his land to build a church for his new-found faith, although he still had very little knowledge of it. As passersby saw the unplowed land and a cross in the center, they began to inquire what this meant. Within a few weeks one of the faithful workers trekked across the mountains to come and share the message of the Bible with this interested man. The man was overjoyed and called together his neighbors and inquirers. As they listened, their hearts were touched that this was the truth from God’s Word. When leaders from their previous church began to accept the message, the other church began its opposition, but as it had no Bible evidence, the people determined to follow the Bible despite the opposition and began keeping God’s Sabbath day. For the past few months a gospel worker has been there grounding this little group and preparing them for baptism. Their only place to meet is in the home of one of the new believers, and the land with the cross still stands vacant, but they are trusting that God will provide a permanent place of worship and memorial for His truth in this previously unentered village. This little group in Otoro is just one of many with similar needs. For $3000 – $4000, a simple church can be built which will stand as a silent witness to this truth. Please pray for our brethren in Ethiopia, and if you would like to help, you can mark your donation “Ethiopia Churches.” 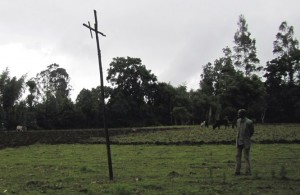 The site dedicated to the new church building

Yours in searching for the “Ethiopian eunuchs,” 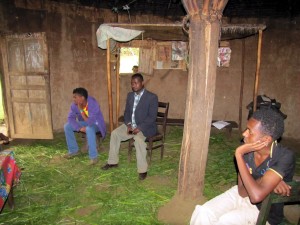 Inside the house/church where they are worshipping