I am Pastor Laxmanan from India. I am a lay pastor in the Tamilnadu District. I would like to share a few things with you about how hard it is to carry out a ministry in this area and how God has given us eight new souls as a gift for our hard work.

In 2006, my wife and I started a ministry in a small town called Aravenu. Even during bad weather and economic problems, we continued the ministry. Still now, we are keeping the Sabbath here without fail. Up to now, there are 42 souls which we have brought into the church.

One couple that now comes regularly to church is Brother Chakravarthy, who previously belonged to a Hindu religion, and Sister Sajitha Begam, who belonged to a Muslim religion. They love each other very much and were married this year. We called Sister Sajitha to our worship first. She accepted our call and came weekly to our church without fail. She then brought her husband to church, as well. They have become very strong in faith and have now become baptized. Sister Sajitha’s mother was against our faith, but the couple has been very firm on the Sabbath. 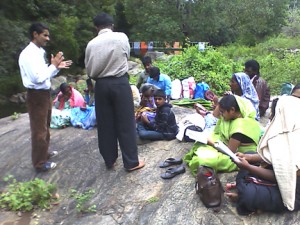 Sometimes when I went to their house for Bible study, their neighbor (Sister Susheela) noticed me. Once when I went to visit them, Sister Susheela called me to her house to have prayer. So my wife, the new couple, and I, all went to her home. We read a few blessing verses and prayed. Sister Susheela had been planning to build a new house and was not able to continue that work due economic issues. She also had a problem of often feeling dizzy and sometimes even faints. She thought this might be a satanic problem. After four days, she called me by phone and said that God had helped her by giving money to build her new house through a government fund! She thanked God and she thanked us for the prayer. Sister Susheela, her husband, and their children all came to join us at church. They seem very strong in faith.

These two families both attended our fasting and prayer meetings. As a small group, I gave them Bible studies to help grow their interest in ministry and they now help me in my ministry. 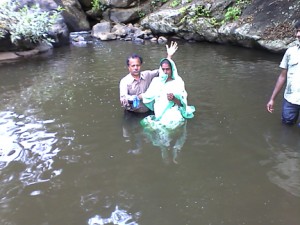 We met another woman named Sister Valli. She was in tears when she told us of her family problems. Sister Valli’s husband passed away and they have some financial problems. She was also worried about her daughter who was not married. I prayed for her and read some verses, which was very peaceful for her. I met Valli’s family before and shared God with them, but she and her family didn’t respond at that time. Now, they are very eager to hear God’s words!

In Sister Valli’s family there is a young man named Brother Ram Shankar, I had shared the message about Sabbath with him before, but he didn’t accept the call. He was addicted to alcohol at the time. He was not able to marry the girl he loved, so he was very depressed and confused. Because of this young man’s issues, there was no peace in their family. 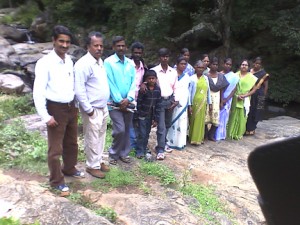 In this situation, we went as a group to their house and said a few peaceful words. We conducted a prayer meeting in Sister Valli’s house. We sang songs, prayed, and I gave a message about peacefulness. Four members of the family, including Brother Ram Shankar, were very impressed by God’s words. They come to church now without fail. Soon after, we called those two families (Sister Valli’s family and Sister Susheela’s family) for a baptism. We prayed for them to accept this call.

Next, I gave them a deep Bible study. They understood everything and decided to be baptized. I called a Seventh-day Adventist pastor to do the baptism for the eight members from the three families. Two of the families burned all of the Hindu idols and photos from their homes. We thanked God for this miracle! God answered our prayers. 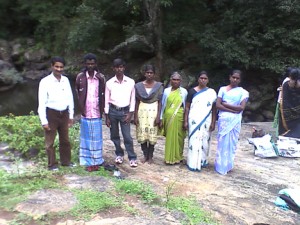 God also helped me to have a new experience in His ministry. Due to the cold climate and rainy season the souls over here are not able to have baptism in the cold water. So, from this hill area, we traveled 30 kilometers down to the plains where the water is quite warm. Church members brought lunch, and we were happy to have this joyous event as a family of God. The baptism function ended with full blessings.

The members of our church are helping me in my ministry. They are economically poor so it is very difficult to provide for travel, food, and other expenses while carrying out our work, so please do pray for them. In the hill area there are many expenses.

In Aravenu there is no church building, so I ask for your support to build a church there. Currently, we are conducting the Sabbath in a rented hall. This place is a car workshop, so it is very noisy during worship hours and it is not very clean. We have planned to conduct an effort meeting soon. Due to this effort meeting, there may be many new souls that come to church. Please pray that our expenses should be fulfilled.

In addition to Aravenu, I am also in charge of another church called Kotagiri. The members are very faithful in this area. I am the one who is conducting the Sabbath every week at Kotagiri Church, and in Aravenu. In both places, under my charge, we work together as a small group. Every day I am working as a lay worker. Pray that our needs should be fulfilled.