Some of God’s guiding in my life has been unmistakable. Sometimes I am not sure what is happening or why; however, I do know that God is in control!

I was baptized in the mid-80s. Within several years of my baptism the ill director of the local church community service asked the church congregation for a temporary assistant. I volunteered—at that time I did not know that there is no such thing as “temporary” in working for the Lord!

In several of the donations that came into the clothing bank I found some old Adventist tracts and booklets, such as Country Living. I read every one I found and was impressed with this new information, particularly with Mrs. White and her writings. Thus began my lessons on how important good literature supply and distribution are to every outreach!

Learning and then teaching in some fashion or another is one of the most enjoyable things that I do. A high percentage of the clients that came to the clothing bank spoke languages other than English, though; most were Romanian, Ukrainian, Laotian and Spanish. It became a primary goal of mine to locate literature in their native tongues, and that was quite a bit of work! I learned what was available and where—most was printed by independent publishing ministries. (God knew that information would serve me well in future endeavors—I did not know it then, but I praise Him for that experience!)

As I had become the leader of the clothing bank, and expanded it, I received a generous budget that allowed me to afford the many tracts, booklets and magazines I purchased for the clothing bank. For Romanian literature I actually drove into Canada to meet a Romanian pastor who would sell me cases of literature! Praise the Lord!

As time has marched on and Jesus’ second advent is obviously closer, providing truth to the many deceived has become even more important to me. I began copying and distributing pertinent DVDs to individuals I met—at church functions, to people I encountered in the health sections of stores, to people I know from college, etc. I also copied some DVDs for the newspaper-type literature boxes that I stock. I continue this work, and keep a list of all the DVDs I have given to each specific individual. I use about a spindle (100 DVDs) every other month.

I often became the primary manager and procurement officer for literature outreaches with which I have been involved. As I learned more about the various deceptions in the world, literature on creation versus evolution as well as the state of the dead were added to what I provided on health and prophecy.

Some of the things I have done over the years include offering literature and Bibles to homeless people (during a project that provided a weekly scheduled feeding for four years), health magazines and tracts to those attending cooking schools, and tracts and Ellen G. White’s books in booths at state fairs, county fairs and local community events.

The city life was becoming odious. The Lord knew what it would take to get me to move into the country; my husband and I had started a business that could be moved and was not dependent on the area where we lived at the time, and it was thriving. I was thrilled that we could move into the country. (I had been brought up in the country, and then the city encroached.) We spent three years searching for just the right property where we thought we would find it; God then took us to an area where we would never have looked, and to a property at which we would never have looked—and God arranged for us to buy it. So I consider this entirely God’s property. 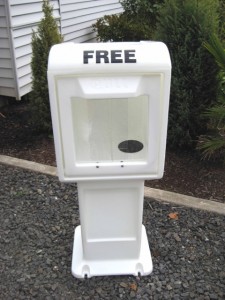 I was dismayed to find that our new local Adventist church was not doing any literature outreach in the area, so I purchased my own first literature box (newspaper stand type) and 25 subscriptions to the Last Generation magazine published at Hartland Institute in Rapidan, Virginia. Since the Last Generation magazines only come every other month, I bought some back issues of the Journal of Health and Healing from Wildwood, Georgia, and some Amazing Health Facts:  8 Bible Secrets from Amazing Facts.

I am only a small person in the giant cog of exciting missionary work; however, it is important to spread the good news wherever you are planted! I now have two free literature distribution boxes in the immediate area and distribute 75 subscriptions of Last Generation and other literature and DVDs that I copy to put in the boxes, and I am always on alert for new literature that meets the needs of the communities.

Since moving here, I have learned more about the county and local communities that helps me choose pertinent literature. This county has the highest unemployment rate in Washington State, and the percentage of women smoking here is greater than any other place in the state! There are quite a few churches in the county, including several small Adventist churches (evangelistic work has definitely helped grow one of them, and more evangelistic work is planned there). The population of Mormons in this area is very high. (I met the “high priest” accidentally one day—there are 3200 people in his ward, he said.) So I am always watching for family-friendly covers on literature. I presume due to the high percentage of women that smoke, the copies of the Last Generation issue on smoking just flew out of the literature box—faster than any other information that has ever been in the boxes. Generally all magazines on health are fairly well received. Although these economic times and current events have increased interest in prophetic things. I have found little interest in prophecy in the immediate area. There seems to be more interest in prophecy to the east, and several areas of heavy Spanish population where I want to put new literature boxes.

God told Mrs. White numerous times about scattering publications like the leaves of autumn. “Tracts upon the important points of truth for the present time should be handed out freely to all who will accept them, without money and without price…. You are to sow beside all waters.” Counsels on Health, 465.

Time is very short! The economy has made saving toward my literature ministry a seriously slow task. Please pray that God provides the extra money necessary to meet the expense of purchasing at least three new boxes, literature to fill them, and a DVD duplicating machine. (I currently duplicate one at a time on my computer, which is extremely slow and time-consuming to make 30 or more for each box whenever I find DVDs that contain good information.)

May God richly bless you for your prayers and any assistance you can provide toward this endeavor!