Before I arrived in Chad, the Adventist church in town had put on an evangelistic effort in Dabgue, a small village nearby. A small group of believers was meeting there under the shade of a mango tree, and that was where I spent my first Sabbath in Chad. With rare exception, we drive our motorcycle down to Dabgue every Sabbath and conduct a program of singing, Bible stories, nature object lessons and a short sermon.

Usually children are the majority in attendance, but over time more adults have been attending. 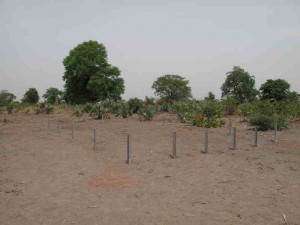 In May 2011, we were ready for a building to protect us from the rain and sun. This was the day we planned to lay out the foundation for the One-day Church structure on land the village chief had donated.

Arriving at the site shortly after my wife and I, the village chief began showing us the property boundaries. We were not finished yet when we heard an approaching mob led by two very angry men angrily yelling simultaneously. One man’s eyes looked like they were about to pop out. They were obviously drunk. The shorter man picked me out and started shouting angrily in French, saying things like, “I’m the chief of so-and-so and you didn’t ask me for permission.” “We don’t need you missionaries; go build somewhere else; we don’t want you here.”

Surrounding him were a bunch of other very excited people, each shouting to each other and mostly agreeing with the angry man. He would switch to the local dialect for a while, shout with the crowd, and then switch back to French for me. From the very start I sent up a prayer to God for safety and a spirit of peace, and He answered that prayer. I determined to let the angry man rant until he was tired. I looked at him, gave him some smiles, but did not say a word. Glancing over at the chief, I saw a distressed and angered face. 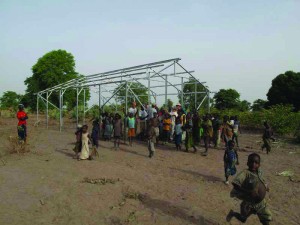 Finally the shorter angry man let up and gave me a chance to speak a few words. Everybody hushed for a while to see what the white man would say. Remembering that a soft answer turns away wrath, I breathed a silent prayer and said in a calm manner, “I have talked with the chief before, and we have received the proper permissions. Today, I have come to give a gift to your village. Furthermore, this is not my church. This will be God’s church and your church all at the same time. I do not understand why all of you are upset at God’s work.” People know how to fight with angry words. But they found it hard to fight with a calm person.

Soon, however, they erupted into more shouting. We retreated with the chief a short way into the field to regroup and talk things over a bit where it was quieter.

At this point I would like to introduce you to my friend and a seeker for truth that we will call Moise in this story. He asked me, “What should we do? Should we pack up and go back? There are many problems here.”

In reply I explained, “This is God’s church. I believe He has led us this far. I cannot turn my back to this crowd. If the chief will still allow us to continue, I think we should start the work.”

“This is truly the work of the Devil,” Moise said. 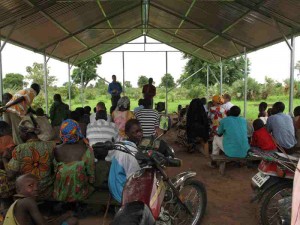 I agreed with his insight completely and encouraged him to remain strong. Moise went over and talked to the chief, and then we decided to begin the work. Another chief ran off to get his hoe to chop the first bush. After the first wheelbarrow and a few buckets were unloaded, the angry crowd, led by the two drunken men, swarmed in to protest and cause trouble again. As the first hoe was lifted, the people overflowed with loud talking and energy, following the lead of the two drunken men. They picked up the hoe and shovels and threw them off into the field, showing their utter contempt for the project. “Absolutely not,” they said, “You will not.”

The chief called out, “Everybody, stop the work. Just wait.” His patience was running out, and he was out of ideas. He told me that he still wanted the church, but I could tell he was discouraged. Then followed more heated arguments and discussions among the crowd.

All the time, I was lifting up to God requests to control the situation for His glory.

Soon the shorter angry man got extremely angry. He confronted the chief and said, “Come, let’s go out into the bush alone and fight.” Those in the crowd who sided with the chief pleaded with him not to go out. The chief gave the angry man a large shove. Tensions were building. Everybody was now watching to see what would happen. Then Moise stepped between the two, calmly pushing them apart, and led the angry man away a little. The chief returned to the crowd where I suggested that we pray before beginning the work. He liked that idea.

But wait, there was another hurdle to face before beginning our work! One jealous church member who had wanted the church erected on his land instead decided to voice his opinions as his last plea in opposition to this plan. On and on he talked, probably for five minutes.

At the end the chief said, “Enough! Pack your baggage and go build your church somewhere else. I’m done,” and began to walk away. It took much persuasion to get him to come back. More and more village people joined in calling him back, and finally he turned around once more and stood near us.

We were just about ready to have prayer.

Then the shorter angry man reappeared. And he was walking directly toward me. Staring into his face I could hardly believe that this was the same man. As he approached, a broad smile stretched below his gentle eyes. Stretching out his hand to me he said, “I’m sorry. Will you forgive me?”

Still a bit shocked at this miraculous change, I firmly gripped his hand and said, “Yes.”

My wife Melody was next, as she reached out her hand in forgiveness to this man.

Then he turned toward the chief. Poor old chief! He wore a grouchy scowl as his eyes peered through squinted eyelids. While his right hand was against his chest, his fingers mechanically started reaching out to shake the formerly angry man’s hand. It was a struggle, but he knew what he should do. With encouragement from the crowd, the old chief slowly reached out his hand in forgiveness to the formerly angry, now calm and peaceful man. 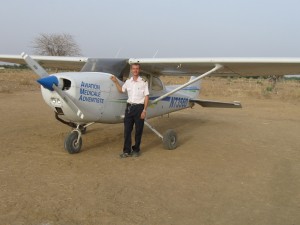 As everybody bowed for prayer, including the now calm man, we asked for God’s blessing on the work and on this village. In the remaining daylight we made good progress, thanks to the help of the village people. God blessed. Before leaving, we asked God to surround the property and the church with holy angels during the night.

The next day the work site was undisturbed by the angry people, and we completed the basic structure. Even though I became ill with malaria that evening, I was back to reasonable health within three days!

Please pray for the group of believers in Dabgue as they continue to meet each Sabbath under the shelter of a tin roof. We are in a war between Christ and Satan. Satan is opposed to God’s work, but he is the weaker of the two. If we give Satan ground, he will take it. But if God has opened the doors and said “Go forward,” our only safety is in doing so.