The Seeds Fell Into Good Ground

Christ also loved the church, and gave himself for it; that he might sanctify and cleanse it with the washing of water by the word, that he might present it to himself a glorious church, not having spot, or wrinkle, or any such thing; but that it should be holy and without blemish.” Ephesians 5:26-27. “When God gave His Son to the world, He made it possible for men and women to be perfect by the use of every capability of their beings to the glory of God. In Christ He gave to them the riches of His grace, and a knowledge of His will.” God’s Amazing Grace, 230.

“Christ’s wonderful sacrifice for the world testifies to the fact that man may be rescued from iniquity. If he will break with Satan and confess his sin, there is hope for him. Man, sinful, blinded, wretched, may repent and be converted, and day by day be forming a character like the character of Christ. Human beings may be reclaimed, regenerated, and may learn to live before the world precious, Christlike lives.” Review and Herald, April 22, 1909.

Last August, together with the two Bible workers, Brother Arvin and Brother Jacinto, I decided to visit a place known as San Jose, Mahayag, Zamboanga del Sur. It was a very interesting trip because we traveled at night from Davao to San Jose by a public bus on bad roads. It was a long 18-hour ride from Davao to the place where we visited. During our travel that lonely night, our tired driver fell asleep. We were shocked and afraid when the bus started zigzagging and almost hit the mountain! We praise God that He sent His angels in answer to our prayers to strengthen the driver so that he could continue to drive, and by God’s grace we arrived safely without any damage. 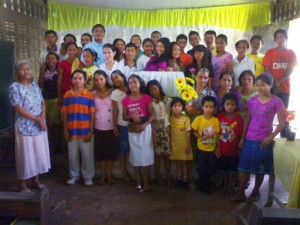 Church group. The author Edmar is the tallest one toward the back.

The next day we surveyed the area, and I found out that the people around there are very hard working. Their source of income is mainly from farming, and they work from Sunday to Sunday without rest. I found that they are physically healthy but spiritually weak. We took a survey about their beliefs, and found that they are dedicated Roman Catholics and are against Sabbath observance. But even though they were prejudiced, God has a faithful people in every place.

I shared the gospel with the family of Marcela and Eduardo, and we talked together about their beliefs. They were also Roman Catholics, well educated about their doctrines and very dependent on the priest and the leader of the church. I looked at them as sheep without a shepherd, but I never tried to debate with them about their beliefs. I just wanted to share with them about the love of Christ and how Christ longs for his children. After we talked, I found that the hardness of their hearts had softened, so I asked them if they would like a Bible study, and surprisingly they did. We agreed to study every night, and I am so glad that I was not discouraged by the surroundings and trusted that God has people ready to hear His truth.

The first study that I presented was about the love of Christ to all people and that to all sinners Christ says, “Come unto me all ye that labour and are heavy laden, and I will give you rest, take my yoke upon you, and learn of me; for I am meek and lowly in heart and ye shall find rest unto your souls.” Matthew 11:28, 29. At the first night’s study, I found their house filled with friends and neighbors that Sister Marcela had invited who were also interested in hearing the gospel.

At the next study the subject was the second coming of Christ. I shared with them Christ’s promise, “This same Jesus, which taken up from you into heaven, shall so come in like manner as ye have seen him go into the heaven.” Acts 1:11. “Let not your heart be troubled: ye believe in God, believe also in me. In my Father’s house are many mansions: if it were not so, I would have told you. I go to prepare a place for you. And if I go and prepare a place for you, I will come again, and receive you unto myself; that where I am there ye may be also.” John 14:1-3. After I read this paragraph, a young lady whose name is Ging-ging asked me about the coming of Jesus and when these things would happen. I was so glad because not only Ging-ging, but also Sister Marcela and Brother Eduardo, were interested to know when these things shall be. So to satisfy the hunger of the soul, I read Matthew 24:36-39, 44: “But of that day and hour knoweth no man, no, not the angels of heaven, but my Father only. But as the days of Noe were, so shall also the coming of the Son of man be. For as in the days that were before the flood they were eating and drinking, marrying and giving in marriage, until the day that Noe entered into the ark, and knew not until the flood came, and took them all away; so shall also the coming of the Son of man be…. Therefore be ye also ready: for in such an hour as ye think not the Son of man cometh.” After I read the paragraph, I expounded to them that Christ’s return to earth is not based on times or dates but famines, pestilence, earthquakes, wars, men being lovers of their own selves, covetous, boasting, proud, blaspheming, disobedient to parents and unholy. I explained to them that these signs have already been fulfilled in our time. 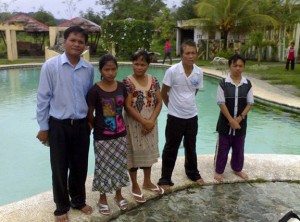 The next day, I found out that Ging-ging’s mother was angry at her because of her interest in the Bible studies. Her mother is a Roman Catholic, but Ging-ging was very courageous and was not afraid of her mother. She continued to come to the studies and began to attend the Sabbath services. Sadly, a month later her father and mother would abuse her when she attended Sabbath services. They were afraid that Sister Ging-ging would become a follower of Christ and a Seventh-day Adventist. Now Ging-ging, who is very young, has stopped attending Sabbath services because of her parents. I remember the word

of God in Matthew 13:20-21: “But he that received the seed into the stony places, the same is he that heareth the word, and anon with joy received it; yet hath he not root in himself, but dureth for a while: for when tribulation and persecution ariseth because of the word, by and by he is offended.”

The next time we studied with Sister Marcela and Brother Eduardo we decided to focus on the Sabbath truth. This subject was difficult for them to accept because Sister Marcela is a hard worker and works from Sunday to Sunday and also because Brother Eduardo is president of the cock fighting in the San Jose Mahayag region and it is difficult for him to rest on the Sabbath. I never tried to force them to accept the Sabbath truth. After the study we prayed, asking for the guidance of the Holy Spirit. 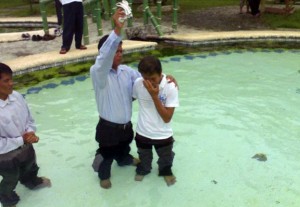 That night I continued to pray to God that these precious souls would be enlightened and ready to accept Jesus and the Sabbath truth. I did not expect to hear so soon that Brother Eduardo and Sister Marcela had made a decision to accept the truth and follow all of God’s commandments. The next day Brother Eduardo resigned as president of the cock fighting because he wanted to follow Jesus and he said to himself: “I want to see Jesus, and I want to dwell in that heavenly kingdom.” His friends mocked him because of his decision to follow Jesus, but he never was discouraged because he knows in whom he believes. 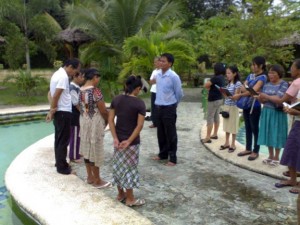 A special moment following the baptism.

Sister Marcela and Brother Eduardo began to attend the services during the Sabbath day, and a month later they decided to accept Jesus through baptism. First Peter 5:8 warns us that the work of Satan in these last days is to destroy the people of God. During the baptism Brother Eduardo felt a terrible pain in his stomach that made it difficult for him to move. It was a sad time, but because of his courage and prayers, God gave power to him, and by God’s grace the pain in his stomach left and the baptism was able to continue. Now Brother Eduardo and Sister Marcella are active in the church and are happy working in the Lord’s vineyard to support the gospel. The work here in the Philippines continues in God’s helping hand, and we pray that the Lord will continue to support the work.

By Edmar Vertudez. Email: vertudez_edmar@yahoo.com. Support for the work in the Philippines can be sent to Mission Projects International, PO Box 59656, Renton, WA 98058.