He Owns All the Silver and Gold

My name is Priscila Meiguins. I am a graduate of the Taquara Institute of Education and Health (IEST), a school for missionaries here in Brazil. I had always seen and heard many stories about Africa and sympathized with the condition of that continent, but I never had the intention to actually go there—until God gave me the privilege of marrying a missionary with a passion for Africa. As soon as we were married, he invited me to accompany him on a trip to Angola five months after our wedding. As it is not wise for newlywed missionaries to spend a long time apart during their first year of marriage, my husband and I decided to stick together and help our African brothers. So it was decided that if it was God’s will for him to travel to Africa this year, I would go with him.

At first I was shocked, but I did not answer immediately. Rather, I prayed and asked of the Lord that if it be His will, He would put in my heart the desire to go and provide all the means for us to travel, as we did not have money available to purchase tickets for the trip. Brethren, we must be careful about what we ask of the Lord, for He will really give it to us; and when He does, we are obligated to fulfill our part of the bargain.

We married in January of 2011, and as time passed, I continued to pray. At this time I was employed as girls’ dean here at IEST. In the middle of March, God began impressing me to go to Africa, as many people could benefit from the knowledge I had acquired from my studies. It was soon confirmed that I would indeed go to Africa, meaning I would have only two and a half months to raise money for the ticket. But I remembered that if it was truly God’s will for me to go, He would provide the funds for the trip.

Supervising fourteen girls as girls’ dean and being married to the director of missions was not an easy job. Not only was I never home on the weekends, but we were also very involved with the school’s missionary work. I also organized the studies for a program that we broadcast on the community radio station. I had almost no available time in which to raise the needed $1500. This would have to be left in the hands of Him who owns all the silver and gold, and that is what we did.

By the beginning of May, we had money for only one ticket, which was my husband Clayton’s. During this time we were preparing for a health expo in a neighborhood near the school, an event that would be divided into two weekends. On the second weekend of the expo, one of the Bible workers that was also going to Africa asked me how much money we already had for the tickets. I remember as if it were today her response when I replied that we only had enough money for one ticket. Her eyes grew wide in astonishment as she gasped, “Do you know there is only one month left?”

I responded, “Yes, but I left that part with Him who owns all the silver and gold. He knows it was not through our negligence,” I added, “and He will provide the rest at the right time.”

I had just closed my mouth when a woman walked past our health expo. This same Bible worker turned to her and asked, “Would you like to help two Bible workers go to Africa?”

She responded, “Yes, who are they?”

She looked at me and said, “I will transfer one thousand dollars to your account next month.” 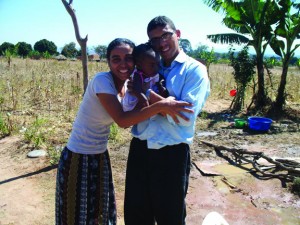 Priscila and Clayton with an Angolan baby.

When the time came to purchase the tickets, God had provided all of the money. When you give yourself to serve the Master, He truly cares for you and provides all that is needed for the furthering of His cause.

When I arrived in Angola, many things happened—incredible things that I will never forget. But I want to go into detail about just one thing that happened to me.

During the second to last week that we were there, I held a cooking class in Luanda for married women. As I taught the course, I also addressed health issues and noticed that there was one woman in particular named Angelica that did not understand much about whole foods. But she was very persistent, and did not miss so much as one day. That 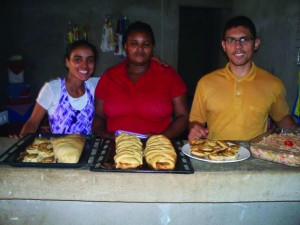 Priscila (left) and her husband Clayton with Angelica and some of the healthy food they taught her to prepare.

Friday, my husband preached in the church next to where we had held our classes, and Angelica and her husband were present. After the service, she said that she needed to speak with me, so I walked with her to the house where we were staying. Meanwhile, she told me a little of the story of her conversion. A year ago, when my husband had last gone to Africa, she had sought him out to ask some nutritional questions and had been unable to follow the counsels. While for a short time she had accepted many reforms in her life, she had been unsuccessful in the area of food, as she did not know how to cook any type of whole food.

Here it was, the last week in Africa after a month of intense work (anyone who has been there knows how that last week is), and we were exhausted. But as God had sent me there and was counting on me, I could not disappoint Him. At that moment, I thought, “This is my mission.”

I remarked that I had noticed she had not kept pace with the classes in the course; therefore, I would repeat the whole course with her at her house during that last week. So every day that week I left for Angelica’s house very early in the morning and left her home only at lunch time. I taught her many things, including how to study the Bible by herself, as she had much difficulty understanding the Bible.

When Friday came, I was not feeling well, but I went anyway. I returned home with a bad headache and chills, but with a great happiness in my heart that a soul had been filled with the knowledge of God.

As it was the last Friday in the country, the brethren expected all the Brazilians to meet together, but my headache and chills grew worse, and I was unable to go. Very early on Sabbath morning I began to have a high fever, and the headache only increased. At daybreak, my husband took me to a private clinic nearby. In only three days we were supposed to return to Brazil, and now we found out that I had malaria. The only thing I remembered at that point is that we were there by God’s will, and He knew exactly what was happening to me and why He was permitting it. 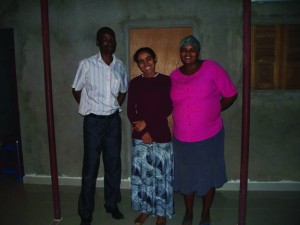 Priscila with Angelica and her husband.

When we stepped into the clinic, the roles were unexpectedly reversed. I had entered Angelica’s house to help, and here her husband, the clinic’s doctor, was taking care of me! Even here God guided. I remember these words when my husband asked how much the treatment would be. The doctor said, “I could never charge anything to people who left their own country to enter ours, coming into our homes and sharing God’s Word. I could never charge anything to those who are willing to bring God’s Word to the whole world.” He added, “You, my sister Priscila, already paid me by entering our home and teaching my wife what she was unable to learn from anyone here in Africa.”

I was amazed because, really, when we help someone, we are truly helping ourselves.

May the Lord bless you all.