We must take every justifiable means of bringing the light before the people. Let the press be utilized, and let every advertising agency be employed that will call attention to the work. This should not be regarded as nonessential. On every street corner you may see placards and notices calling attention to various things that are going on, some of them of the most objectionable character; and shall those who have the light of life be satisfied with feeble efforts to call the attention of the masses to the truth?” Testimonies, vol. 6, 36, 37. 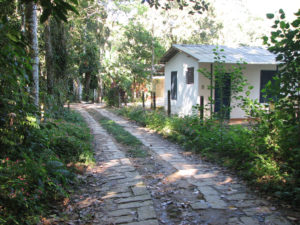 Our job has been spelled out- let our light so shine that the attention of the masses will be arrested to the truth. What are we doing to accomplish this mission? A few laymen in Brazil believe and are acting upon this statement. “Every advertising agency” should “be employed that will call attention to the work.” Although they are a small group with limited financial resources, they have undertaken a large work for the Master, using what they have to call the attention of the masses to the truths for this time. When the opportunity became available to broadcast the truth on a major radio station in the city of São Paulo, Brazil, Alexandre and Olimpia moved forward by faith. There had already been conversions as a result of a previous radio program and they already had a program during the evening hours, but they knew that they needed to do more.

They were offered a prime spot from one to three Sunday afternoon on one of the most listened to Pentecostal/ evangelical radio stations in the city. With a potential listening audience of around twenty million and an estimated listening audience of around forty to fifty thousand a minute, this station, located within the heart of the financial center of South America, certainly has the ability to call the attention of the masses to the truth for this time! 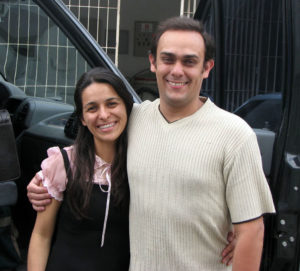 Olimpia and Alexandre who are using the radio to reach Brazil.

Alexandre and Olimpia signed a two-year contract, even though they did not have the needed funds. They believed the Lord was opening the door and that He would provide the funds for the proclamation of His message. They had contacted brethren who wanted the truth to be proclaimed and received monthly pledges, but they knew that it would require them to sacrifice much and sometimes all of their income in order for the work to go forward. Still Alexandre and Olimpia were willing to put everything into the work causing them sometimes to spend every single real (ray-all) (Brazilian currency) and prolong their engagement in order to keep the truth-filled program on the air.

With the magnitude of the project before them, they appealed to us to assist them in this endeavor. For several months, we communicated trying to ascertain the need, merit and trustworthiness of the work. We began to help them, but wanted to make sure that the funds were being used appropriately and that the work being carried on was legitimate. (While we desire to help the Lord’s work in whatever way we can, we thoroughly investigate a project and maintain regular reporting to be certain that the Lord’s funds are being used the best way possible.) So with this in mind, we scheduled a trip to Brazil to meet our brethren there, encourage them and survey the work.

We were joyfully received and immediately went to work. Meetings with the brethren, Bible studies with the neighbors, visiting contacts from the radio program and negotiating the gridlock traffic of São Paulo kept our days full. After being there a couple days, Sunday morning came, and it was time to go downtown to the radio station for the live program. Although the battle with the traffic was fierce, we finally rushed into the station and began. As I listened to Alexandre MC the program, I knew that the Lord had given a special gift to him. Before becoming a Seventh-Day Adventist, he had been an announcer on a worldly station, but now he announces the truth over the airwaves instead! 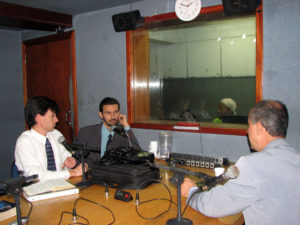 During the program, it feels like you are right in the living room talking together. A history teacher is doing a careful study of the book of Daniel verse-by-verse, then comes the message of the day. Godly Christian music is interspersed between the segments and the program ends with special prayer for the requests of the callers. It was clear that the Lord is blessing and that the people are responding. The brethren believe that the program has been divinely placed because right before “The Message for the Last Hour” (the program our brethren have been airing), a group specializing in attacking Seventh-day Adventists airs their program. The brethren do not meet attack with attack, but simply present the straight truth from the Word of God.

After the radio broadcast, we once again were required to endanger our lives battling traffic. A special meeting on Bible prophecy for the radio listeners was convening in just a few hours. After picking up some contacts in the school bus, we arrived at the meeting location and began setting up. Because we had gotten lost getting there ourselves, we wondered how many would actually come, but people began coming. Soon the room was overflowing and more chairs and desks were being fetched from other rooms to accommodate everyone. 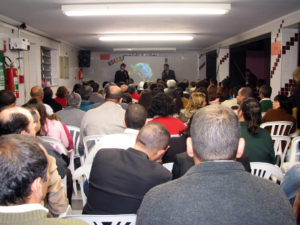 The crowd who came to listen to the gospel meeting advertised on the radio program that day.

The people were very responsive and receptive as we went through prophecy noticing that at the very end of time a church/state union is described. Many had never studied the beasts of Daniel and Revelation nor had they noticed that the church rides and controls the government in the final prophecies. Several people shared how their eyes had been opened and how thankful they were. They were also looking forward to the next week’s meeting. While we had wondered if people would be able to find it and come, over one hundred people came out simply from hearing the announcement on the radio.

After the meeting ended, our long day was not over yet. While it was ten in the evening and we had been traversing the city for hours preaching on the radio and in person, we still had a five or six hour journey to the other major city of Brazil, Rio de Janeiro. Off to the bus station to catch the midnight bus! 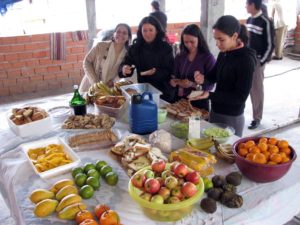 Outside of Rio de Janeiro, an educational institution founded by Diego and Melissa Silva. IEST (Taquara Institute of Education and Health) is nestled up against the mountains within an ecological park in a peaceful, picturesque location. With over twenty students studying and preparing for missionary work, it promises to send forth many missionaries into the vast mission field of Brazil. It was quite a contrast to the hectic hubbub of São Paulo, but after a few days, it was time to head southwest to the metropolis again. Soon we were in the middle of another busy weekend of sharing messages in churches, visiting contacts, holding the evangelistic meeting, preaching on the radio and finally to the airport.

I was very happy to see a tremendous work going forward in Brazil both through the radio ministry in São Paulo and the publishing and educational work of IEST. After our last meeting with the radio contacts, some made decisions to keep the Sabbath while others are continuing to study. One lady called the next day to share that she had traveled from another state to attend the meeting and was now looking for another job that would not require Sabbath work. During the last radio program, seventy people called requesting Bible  studies. The truth is indeed marching on. Hundreds of truth-filled publications have been given to inquirers. They are now continuing to develop the interests through a monthly meeting. For their upcoming meeting, they have reserved a location that will hold two hundred and fifty people! In addition to their monthly meeting, they have started a Bible class where thirty people are gathering together to study Revelation. They intend to start other classes in different areas of the city so that more and more people will have an opportunity to hear and receive the “message for the final hour.” The Lord is abundantly blessing the brethren and the work as they use “every advertising agency” for the promulgation of the everlasting gospel. Please pray for Alexandre and Olimpia and the others as they seek to call the attention of the masses to the testing truths for this time.
By Cody Francis. Donations for the radio ministry in Brazil may be sent to Mission Projects International, PO Box 59656, Renton, WA 98059.