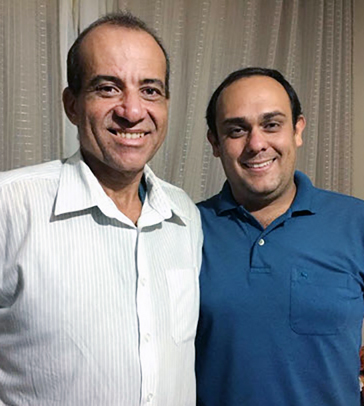 Kleber Afonso da Fonseca, now 46 years old, was born in an environment divided between spiritualism and Catholicism. He didn’t have a true concept of who God was, but neither would he accept his family’s religion. During the time he accepted Jesus as his Savior, he lived in Rio de Janeiro. He began attending Assembly of God, a Pentecostal church, and was baptized and became a member.

As time went by, he began studying Scripture and had doubts regarding the fourth commandment because his church kept Sunday. He questioned the leadership on this issue many times, but never received a clear answer. They would only say that keeping Sabbath was something that was done in the past and that today we are living under the new covenant. They also said that Jesus had abolished this commandment. Not satisfied with the answer, he ended up leaving the Assembly of God Church and joined another Pentecostal church called Projeto Vida Nova (New Life Project).

One day, when he was returning from work, he saw a tent set up and became curious to know what it was. He decided to go in and found out that it was an outreach project of the Seventh-day Adventist Church and, in an apparent coincidence, the preacher was speaking about the Sabbath that very night. Kleber continued attending the outreach seminar, received Bible studies, and then considered baptism, deciding that his baptism with the Pentecostal church was not valid. His decision to join the Seventh-day Adventist Church created conflicts in his marriage because his wife Keila had heard that the church was a sect. She wouldn’t accept the idea of him attending that church. Besides his wife, there were a lot of people telling him he should leave the Adventist church for the same reason. During this time, Kleber and Keila decided to move to São Paulo, taking Kleber away from his new church.. Because his wife was not in favor of him attending a Seventh-day Adventist church, he stopped going to church altogether. However, he kept studying Seventh-day Adventist teachings on the Internet.

Kleber was accostomed to hearing the radio station Musical FM in São Paulo, but he noticed that the radio station’s programs didn’t teach the truth. Then one day, a program caught his attention because of its name—The Truth for the Time of the End—and he realized that the messages broadcasted were identical to the ones he had studied in the Seventh-day Adventist Church. The messages were in line with the truth such as it is portrayed in the Word of God, and he became a frequent listener of this radio program. He also began attending Bible classes promoted by The Truth for the Time of the End Ministry, every Sunday at 4:00 pm.

Kleber was overweight, weighing about 326 pounds, and that really bothered him. He made an appointment with a bariatric surgeon with the goal of becoming thinner. The doctor told him he couldn’t do the surgery if Kleber was a vegetarian. He asked him why. The doctor said that those who undergo bariatric surgery should always eat meat, otherwise they would develop anemia and weakness. Since Kleber was not a vegetarian, he decided to go through with the surgery. Afterwards, however, whenever he ate he wouldn’t feel good because the food was heavy on his stomach. He had pain and couldn’t sleep well. But he continued eating the same way his doctor had instructed. He lost many pounds and eventually returned to his ideal weight, but he still didn’t feel well when he ate.

One day, Kleber was attending a study on God’s plan for health at a Bible class offered by The Truth for the Time of the End Ministry. During this lesson, ministered by Pastor Enéas Simon Jr., Kleber decided to become a vegetarian, in spite of what his doctor had told him. He is not completely vegetarian yet, but the meat on his meals has dropped nearly to zero. Since then, Kleber has been feeling better, no longer has pain, and has developed an enjoyment of fruits and vegetables—food that he used to hate.

Kleber thanks God for keeping His Word alive in our time, and for having a remnant people on this earth who share the pure message through radio, TV, the Internet, and other methods. He asks that God continues using people, just like he used the radio program, The Truth for the Time of the End, to reach others for God’s truth, especially his wife Keila and his children, Thallys, Charrys, and Thierry.

By Alexandre Bernardes, of Ministerio a verdade para o Tempo do Fim, in Brazil. Alexandre7dia@hotmail.com.